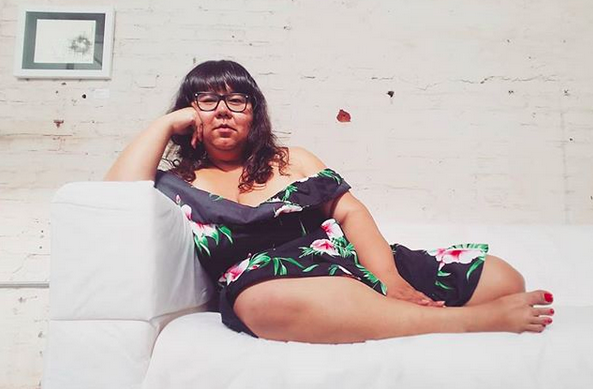 “But what about health?” is a familiar refrain to anyone who’s attempted to have a serious conversation about fat activism or body justice. At a recent event I did with author and fat studies scholar Katie LeBesco in New York, Katie pointed out that refusing to engage with the topic of health at all was a position of privilege. Agree. Fat people – like all people – have chronic illnesses, pain, need for treatment, and the right to quality medical care. Her statement reminded me of conversations I witnessed when I was new to fat activism in 2010 and 2011. Many fat people are denied proper medical care because of anti-fat discrimination. So we would share the names of fat positive medical care practitioners (now you can do this on apps like Ample) and some people in the fat movement even pursued training in alternative medicine and massage specifically to be in service to fat people whose health needs weren’t being met or whose health was considered unimportant unless they lost weight first.

This issue is nuanced.

However, I think it’s important not to allow the demand for fat rights to be reduced to a referendum on the health of fat people.

I also think it’s important to change the way we think about what health is in order to take this conversation from one about an individual pursuit of certain outcomes to one about a cultural shift in how we treat all stigmatized people.

To begin with, I generally find the health question to serve as a derailment mechanism. I’m talking about human rights and every person’s right to a life free from bigotry and discrimination –  primarily a social issue - and the person who brings up health often wants to wrench the conversation back into personal responsibility – an individual issue – in order to rationalize bigotry. Having a conversation about the individual without having a conversation about the culture in which that person exists is, I think, incomplete.

During the New York event, Katie also asked me what my response to the “but what about health” question. This is what I said:

In mainstream culture, health is something we always consider as measurable and quantifiable – a one size fits all way of figuring out whether some people have succeeded and some have failed at meeting a standard. The purpose of having these measurable outcomes is layered. There’s a practical purpose: it helps medical care providers decipher whether some people are in distress and need to be treated. However, it also serves a social purpose - to decipher the compliant people from the "non-compliant" people because our culture literally cannot function without hierarchy.

Capitalism, white supremacy and heteronormativity would stop working if we accepted that there is no one, singular way to measure happiness or wellness or goodness or beauty. The fear is that we would become unruly and ungovernable if we accepted that human diversity is normal and wonderful and that happiness is never achieved through an expectation of homogeneity. The vocabulary of health is a vocabulary of rationalization for what is clearly a deeply troubled culture. I think health is a bootstrapping language that seeks to render a cultural problem into an individual problem.

If we truly, truly wanted health as a nation we would see the decision to end militarization, we would see initiatives to end homelesness, we would see true moves toward closing prisons, we would see campaigns to end discrimination (which we know causes long term health damage to stigmatized people), we would see earnest efforts toward getting everyone clean water and nutritious food even if it means profit loss, we would see public health money encouraging people to prioritize joyful movement, we would have universal healthcare, we would have measures in place to protect individuals from corporate greed. We would see these as national priorities. I don't see any of this. And I simply don’t believe that the people who are allegedly so concerned about my health care about any of this either.

I see health rhetoric as a means to blame individuals, and I honestly also see it as anti-scientific. The data I have seen is pretty clear on the fact that health is something we need to think about as a collective responsibility, that humans thrive when they feel safe and loved and that discrimination kills people. So I don't believe “what about health?” is a genuine or legitimate question meant to promote human wellness and I refuse to recognize it as such. This culture takes safety in quantifiable data but the truth is human life is mysterious and magical, and bodies are mysterious and magical. What humans need in order to thrive cannot be entirely summed up in an excel spreadsheet.

I see the path to fat justice as one paved through the assertion of and insistence upon fat people’s full humanity and our right to a life free from discrimination — not our health status.

If you like this article, please share it! Your clicks keep us alive!
Tags
take the cake
Virgie Tovar
fatphobia
fat liberation
fat discrimination
health