Fitspo Is Not For Ten-Year-Olds​ 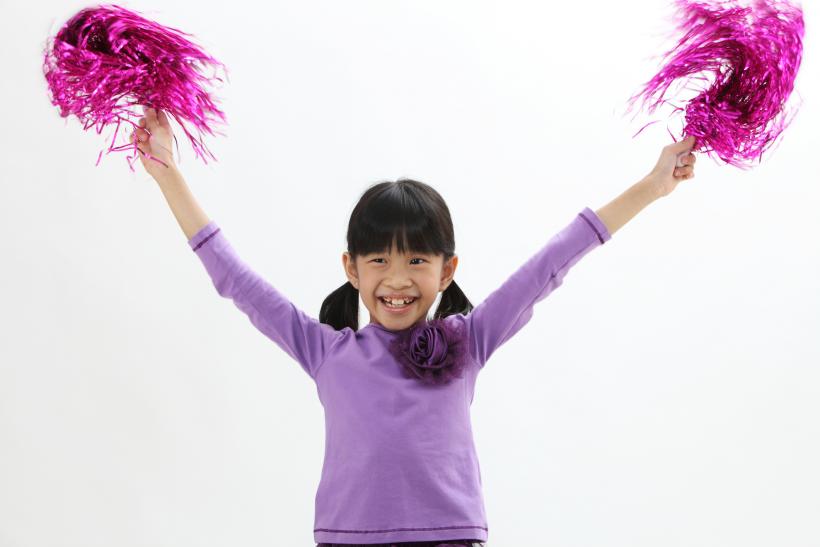 Kids fitness — by any definition — isn’t an obligation or barometer of worthiness.

Bella Miranda has been an all-star cheerleader for five years. That level of cheerleading is elite and requires an almost unbelievable level of athleticism. These cheerleaders are expected to hold other girls on their hands and balance on someone else’s hands while doing feats of flexibility that most people couldn’t do standing on solid ground. They have to dance, jump, do tumbling sequences across the mat that will remind you of the Olympics, and do a standing back tuck, all while smiling and looking like none of it requires any effort at all.

Bella is involved in track and field, volleyball, softball, and cross country. Her current schedule sees her “in track and field at 3:30 p.m., then she goes straight home at 4:00 p.m. to be at the gym at 5:00 p.m. Mondays are 5:00 p.m. to 9:00 p.m. at the [cheerleading] gym, so that's four hours. She does open gym twice a week. Some days she does private training for two hours. Every day she trains for two to three hours. At home, she does burpees and V-ups and push-ups. She has competitions on weekends.” Her “fitspiration” Instagram account has 17,000 followers.

Her mom Carrie, who helps her run the account, says that she wants her daughter to be "a symbol of fitness" and inspiration for other girls who may come across her posts.

Before I break this down, I want to tell you a little something about me. I decided around 5th grade that I wanted to be a professional clarinet player. I practiced for hours every day while also playing soccer and volleyball, being a cheerleader (the regular school sport kind, not an all-star,) taking dance classes, competing in figure skating, singing in choir, acting in school plays, competing in math and science competitions, and getting grades that would eventually make me valedictorian.

I don’t say this to brag (my junior year of college I decided I didn’t want to be a professional clarinet player, but I did get to play Carnegie Hall, so it wasn’t a total bust). I say this to explain that I was also a driven kid, involved in lots of things, and busy all day too, and my mom supported the hell out of my dreams. My issue isn’t that Bella and her mom have decided on this path for now.

And before anybody starts, I have no problem with Bella’s pictures, poses, or what she is wearing in them. If you are sexualizing a ten-year-old, you have a problem, and you need to fix that, like, yesterday. We need to place blame on abusers, and not their victims.

What I want to talk about is the idea that her mom wants Bella to be a “symbol of fitness” and an “inspiration” for other girls. That’s where this whole thing falls right off a cliff.

First of all, it creates a tremendous amount of pressure on a ten-year-old girl (who likely hasn’t gone through puberty yet) to look a certain way. Bella’s body is going to change in as-yet-unknown ways, especially as puberty sets in and girls start to gain weight. Additionally, disordered eating, eating disorders, and compulsive over-exercising run rampant in the world of elite cheerleading. It’s important for parents to work to avoid pressure to meet unrealistic expectations.

I’m not sure that making a not-yet-teenager into an Instagram Fitspo celebrity is the best way to go about that.

On a more global scale, this is not the kind of “inspiration” that the average girl needs. Your average ten-year-old doesn’t want to cheer at an all-star level, so this kind of workout schedule is inappropriate and risks injuries and health issues. Those risks may be worth it if the kid is trying to be an elite athlete, but they certainly aren’t worth it if their exercise goals include participating in today’s kickball game in PE.

The idea of fitness inspiration is a tricky one when we take it in the context of a dangerous “more is always better” approach to exercise where kids are feeling tremendous pressure to meet unrealistic beauty stereotypes.

This is the world in which kids like Bella are made into tools that end up harming other kids because now it’s not just fashion magazines creating pressure — it’s the girls’ own peers. While it's fine for child athletes to be on social media, it should be clear that what they are doing certainly isn’t necessary, or even appropriate. It should also be clear that for most kids fitness — by any definition — isn’t an obligation or barometer of worthiness. All kids should be given as many options as possible for engaging in movement and then be allowed to decide if and how they want to get involved.

If you like this article, please share it! Your clicks keep us alive!
Tags
fitspo
Kids
fatshame
American Academy of Pediatrics
Bella Miranda