Take The Cake: 4 Reasons To Free Your Arm Fat 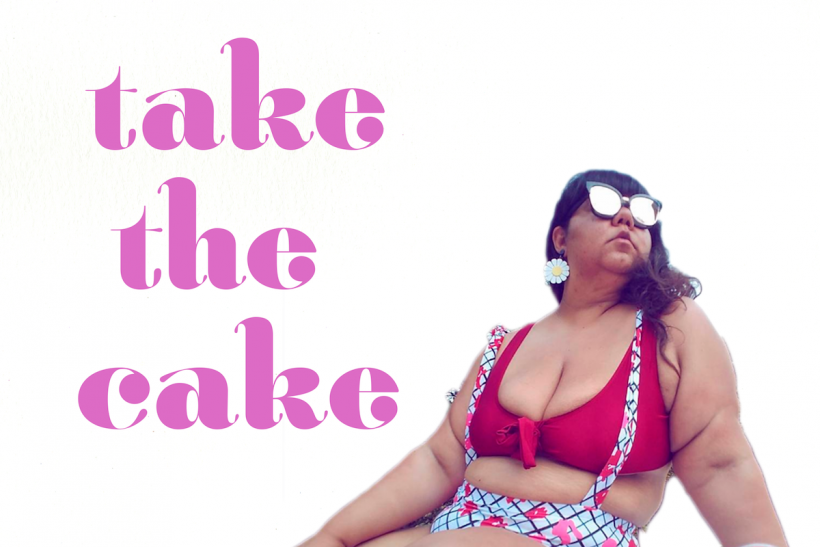 Join me and free your arm fat!

My upper arm fat is one of the most fraught battlegrounds on which the war for my body liberation and self-love has been fought. Let me explain: I don't just have fat arms. My upper arms have a small fold, kind of like a little tummy between my shoulder and my elbow. Think bactrian rather than dromedary. My aunt has my upper arms, but my mom and my grandma don't.

I grew up with the expectation of modesty. I think this was pretty typical for a girl raised by a conservative Pentecostal family, but I know that it was especially imperative to my upbringing because I was fat. My fatness not only dangerously amplified my femininity (jiggle, boobies, etc.), it was also a visible sign of my otherness in an environment where conformity was encouraged.

I was raised by my grandmother, a woman who has worn a girdle every day of her life. She definitely loves me but she’s not what one might exactly call “fat positive.” I remember each time I would come out of my bedroom wearing something sleeveless or short-sleeved she would gently ask what I was going to wear over my outfit. It felt almost like a reflex, maybe a reverberation from her own past.

I'm not sure if she meant it the way that I experienced it, but I remember knowing that my upper arm fat was a source of discomfort for others and that her gentle coaxing was about taking care of them. I grew to become ashamed of my arms because I saw few people with arms like my own (probably cuz their grandmas were also making them wearing scratchy cardigans in the 94 degree heat).

The first time I went sleeveless in public I was, I think, 25. I was working in New Jersey. Extreme humidity dictated that modesty was simply not a luxury I could afford. It was liberating to be so hot that I couldn’t cover up.

Each one of is a special human with inherent worth and value. No amount of covering up or toning down actually increases or decreases your value.

This year has been a real paradigm shift year for my arm fat, and I’d like to offer you 4 reasons to join me in public wobbly ecstasy:

1. Modesty is a sexist racket.

Modesty is something that was totally made up by some old white dude or maybe his not-a-great-ally wife. It is a contrived performance of value and chastity that disproportionately affects women. The truth is we don't need to perform value. Each one of us is a special human with inherent worth and value. No amount of covering up or toning down actually increases or decreases your value.

2. Arm diversity is a real and beautiful thing.

The reason we keep seeing the same arms over and over again and thinking they’re the only normal kind is that the rest of us are keeping our arms under a bushel. We need to divest from the false construct of arm monoculture.

Comfort is one of the most basic things we need in order to focus on what matters most to us and live our best lives. We deserve comfort! I can’t tell you how many too-tight, too-hot, not-cute, weird-colored, ill-fitting things I have worn in order to cover my, in fact, totally-fine arms. (I’m thinking of the super unnatural pastel colored cape I wore over my dress to junior prom. I looked like a mix between a Cadbury egg and a nun in drag. In a bad way.) I feel that as fat people we are taught that our comfort and desire simply don’t matter because we have broken the social contract, and now we just have to be punished endlessly.

Fuck. That. Comfort is embodiment. Embodiment is healing.

4. Imagine your arms are like your children. What future do you want to build for them?

I think my grandmother's arm covering expectations were meant to teach me that there were rules and I had to follow them. I think the fact that she never questioned them herself was a testament to the ways in which harmful rules like these govern our lives because they are positioned as totally normal (even though they are super not normal). If my arms were like my children, I would want them to inherit a world where they get to play freely and are not stifled for 25 years just because they’re different.

5. (Bonus!) Use the money you save from not buying cardigans to start your own feminist militia.

If I had all the money I’ve spent on modesty garments, I’d have enough capital to buy 459 people an ice cream sandwich and a beret that says “The Government Should Subsidize My Tampons” on it. Basically, a revolutionary starter kit. I want that life for myself and for you.

How Access To Plus-Size Fashion Changed (And Saved) My Life