I Don't Give A Crap About My "Bikini Body" 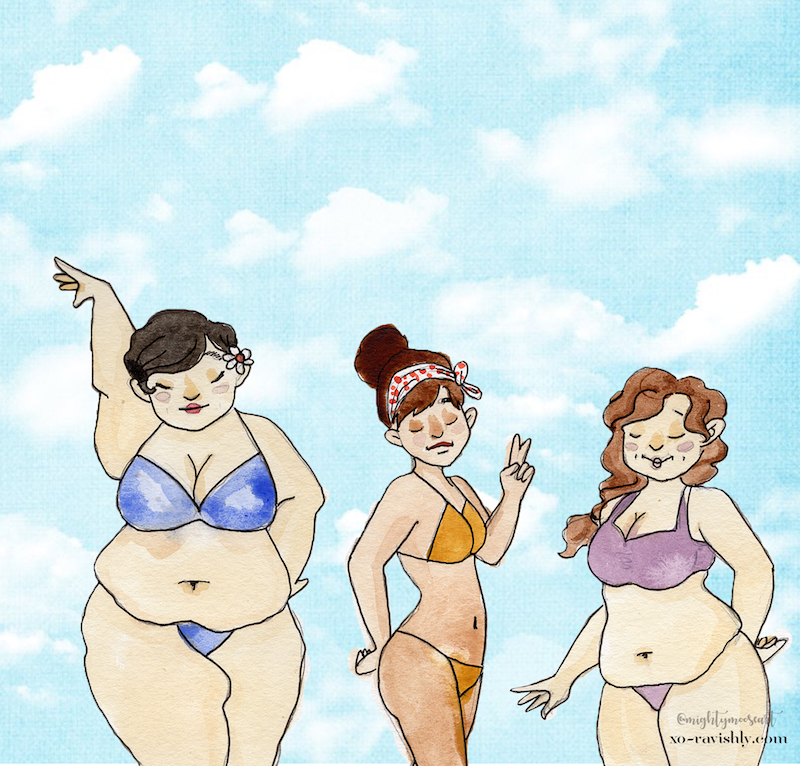 When I was 12, I had a friend named Jenny. Jenny had been my friend longer than any other person — seven years (which is basically a lifetime when you’re 12).

Jenny and I spent summers lying on beach towels in her backyard, back when there was no Spotify, back when you just waited for the DJ to play your favorite song. If you were lucky enough to catch it, you might be able to get to the tape recorder fast enough to hit the red button so you would have that song at your fingertips (minus the first 10 or so seconds).

Ah the good old days, when singers just alluded to their sexual escapades and Madonna made short hair look so good.

In the 80s, the radio stations played the same 20 songs on repeat and had “flip” alerts every 30 minutes — “FLIP” to tan the front/back. If we ran out of Banana Boat, there was always Crisco in the cupboard, hanging out all solid and greasy, waiting to fry some chicken, or, in a pinch, sub as a tanning medium.

We wore bikinis, and during the front tanning sesh, we’d untie the straps, hike our bottoms up into our ass cracks (brief --> thong) and bake.

We scrutinized our own bodies (Ugh LOOK at my thighs, they are so gross) or our friends’ bodies, (Did you SEE her cottage-cheese butt?!). Bodies were the subject of the day, the month, the entire teenage experience.

Guess who has cellulite? EVERYONE. Cellulite means you have skin. Skin is good.

I don’t remember being particularly confident about my body, I do remember thinking that I should look confident, even if I hated my thighs.

So that’s what I did.

Maybe it was when I became a mother that my swimsuit policies changed. Not a “mother” like “I have created human life," but a mother, like “I have a closet of scrapbook supplies organized alphabetically by color,” a mother like “I buy sensible one-piece swimwear from Land’s End.” Maybe that was when my feelings about myself took enough of a turn that I couldn’t even think about a bikini.

I spent most of my 20s, and half of my 30s, being a good Mormon. Official Mormon Guidelines For Not Looking Skanky make selecting swimwear really simple. (NO TWO PIECES, SKANK!)

So I did that.

I didn’t have a “bikini” body. It wouldn’t have mattered if I thought I was the cover of Sport’s Illustrated Swimsuit edition, I was not going to have a Bikini Body.

I had a Sensibly-Colored-Skirted-One-Piece-With-Modest-Straps Body.

In my mid 30s, I was manic. Mania (and an eating disorder) transformed my Sensibly-Colored-Skirted-One-Piece-With-Modest-Straps Body, to a Bikini Body. With the right cut (not too low because pubic hair curtain), I wore that bikini like I’d always worn it.

The mania subsided, and I had two more babies and reverted to Sensibly-Colored-Skirted-One-Piece-With-Modest-Straps Body. There wasn’t religious pressure to do so, but my own internal pressure toward perfection was plenty profound enough to keep me in a one-piece, covered by a kaftan, wrapped in a towel on the beach, sitting in what basically amounted to a tent.

My post-(six) baby body had no business in something that showed any part of my mid-section.

And then sometime in my 40th year, it clicked.

I no longer gave a shit. 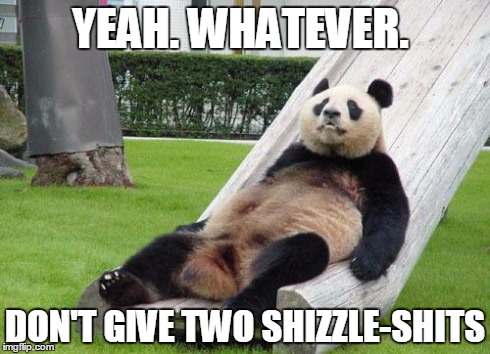 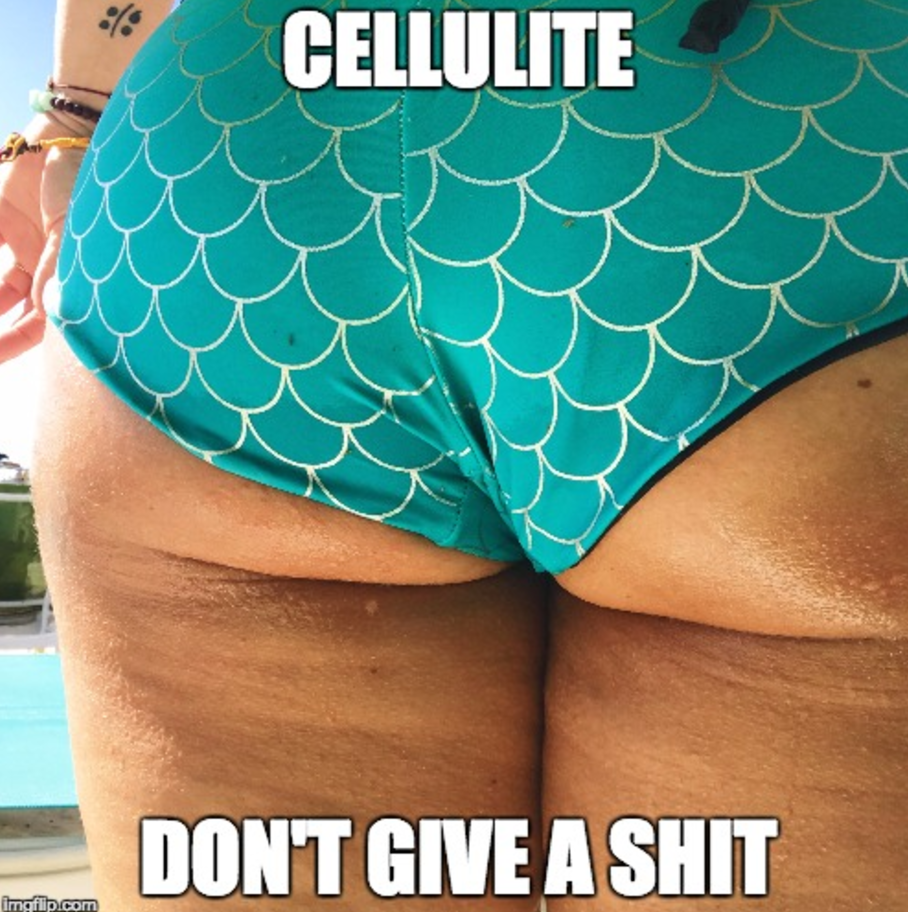 Guess who has cellulite? EVERYONE. Cellulite means you have skin. Skin is good. 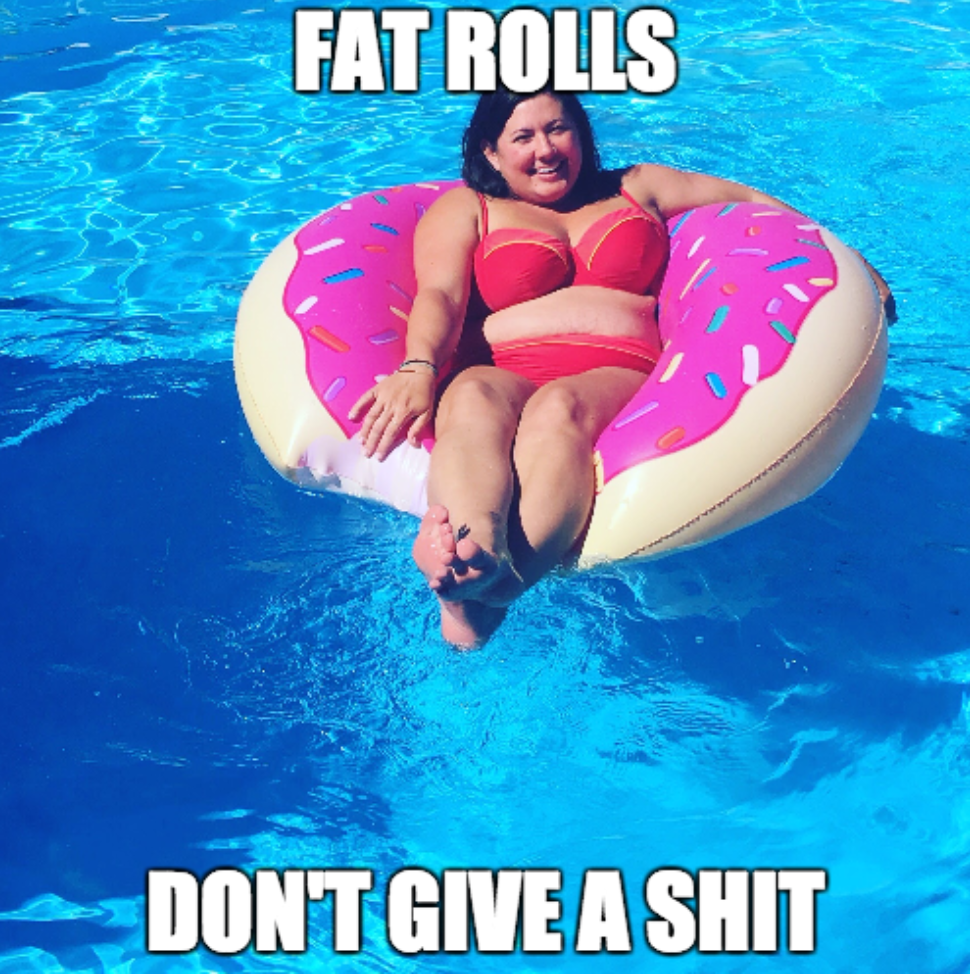 Know how I got those rolls? Childbirth. And cake. Neither of which I want to live without.

What else did I get from childbirth? 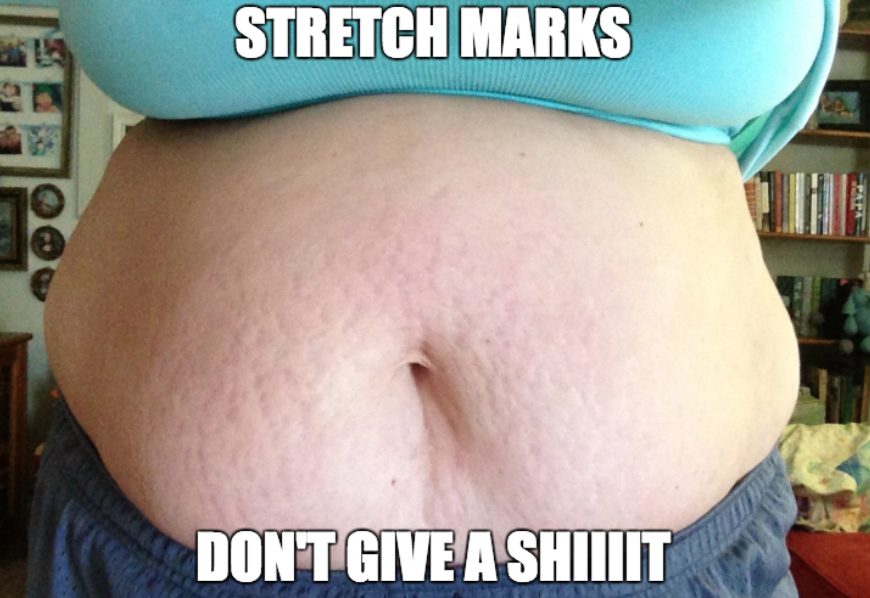 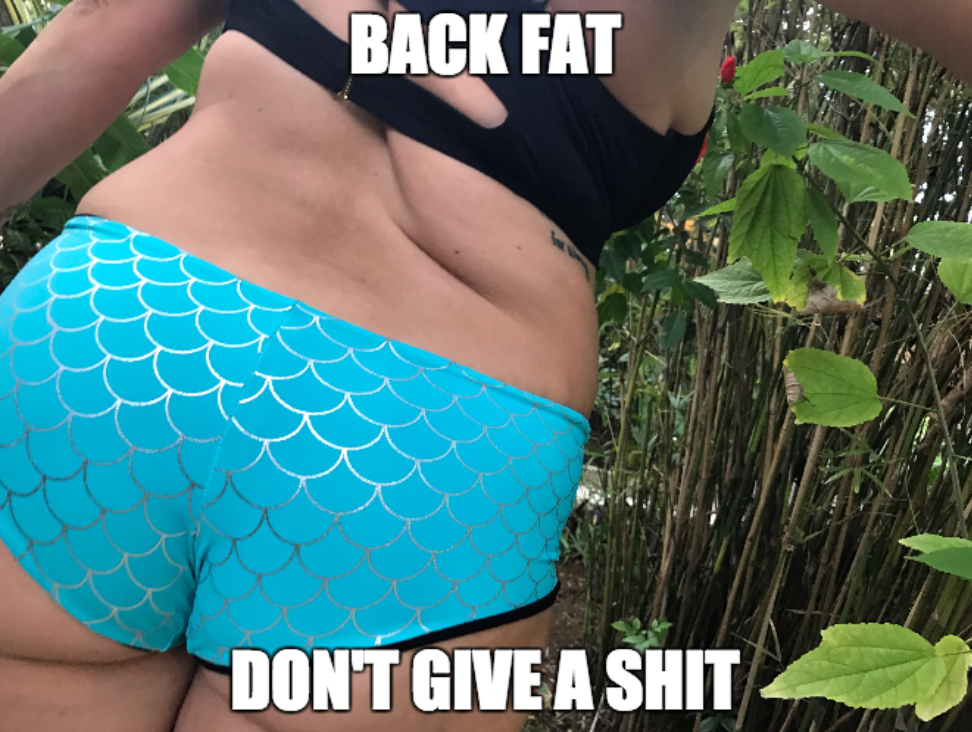 Ever had your man (or woman or whoever you love) grab you by those luscious lumps on the side of your body? Guess who likes handles. The person who loves you. 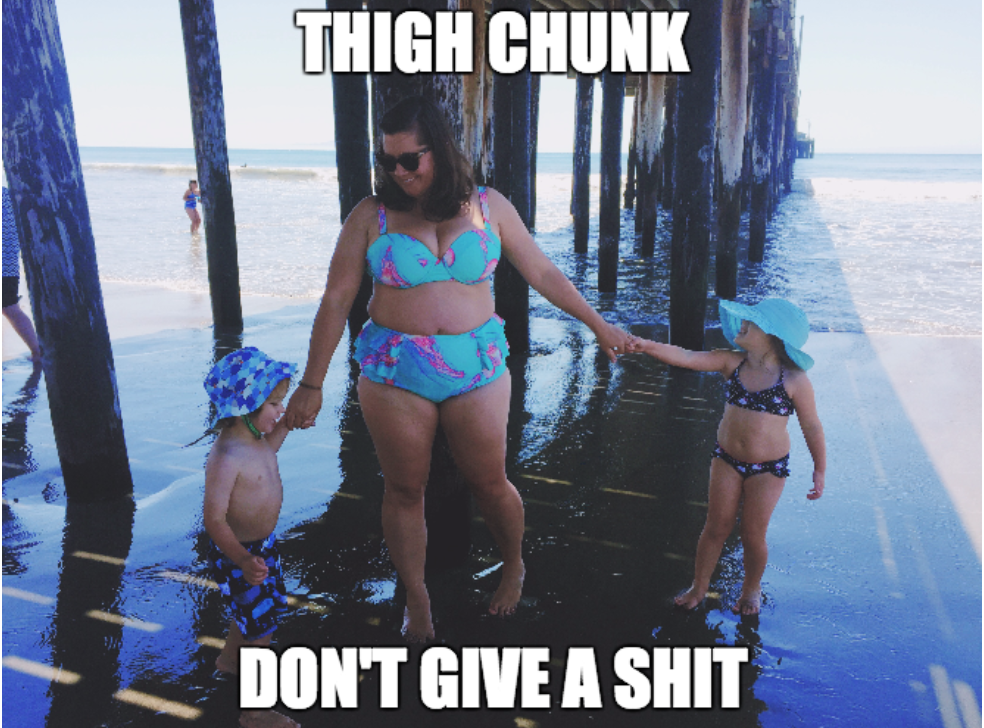 Know who doesn’t give a shit about your thighs? Your KIDS. 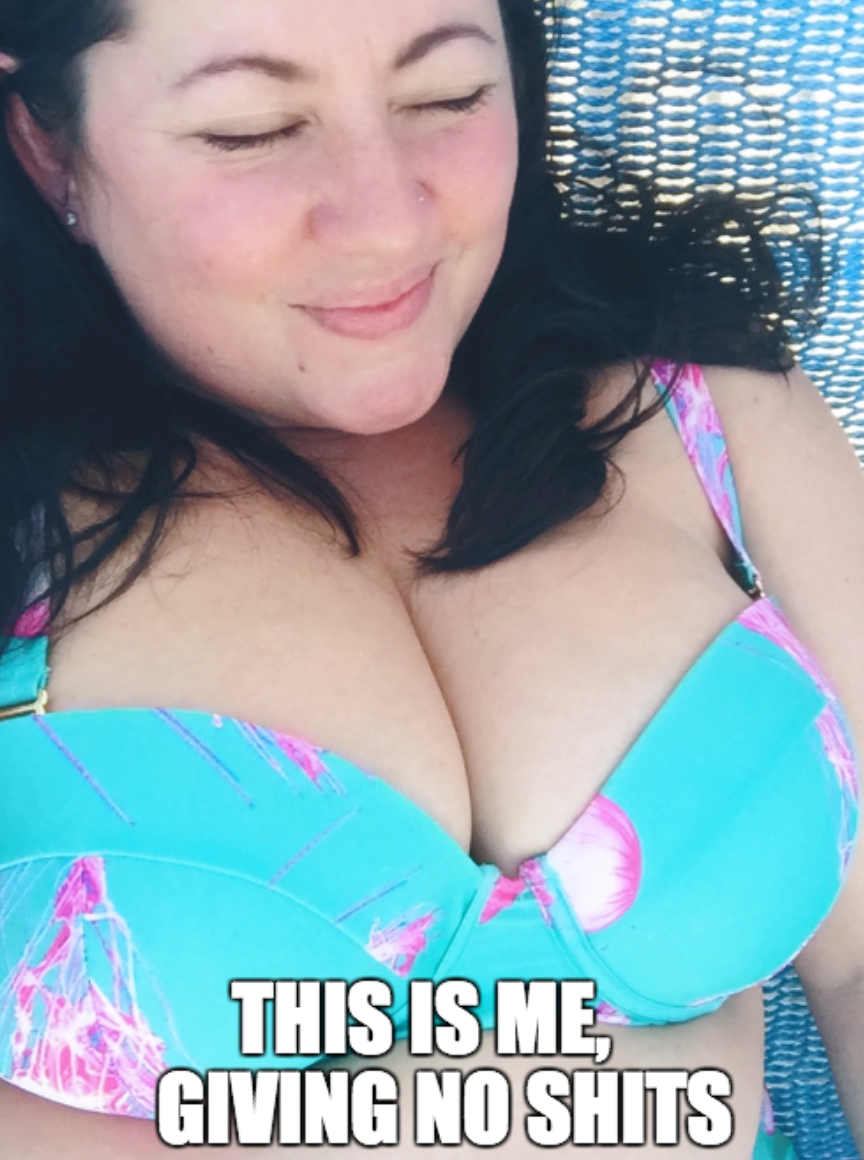 And on the seventh day, no shits were given.

How did I stop giving a shit?

I just decided that people that don’t like my body aren’t people I care about.

Not like “go to hell dirty bastard,” just like, “Don’t like it? OK. So? Was I supposed to care? OOPS I forgot to tell you, I DON’T GIVE A SHIT!”

I really did just wake up and decide I didn’t care. I just decided my swimwear choice is a right.

I know it’s not that easy for everyone; there are a lot of reasons folks have issues with their bodies. But, your fat, your stretch marks, your rolls — none of those have to be an issue.

Does that sound too good to be true?

I want to wear a bikini, because I like them, so I do.

Do people at the beach say things like “she has NO business in a bikini?” Yes.

Seriously, why do you care what they think? They are just as indoctrinated as you were before you decided not to give a shit. If someone thinks you look like a stretch-marked, saggy, cellulite-laden whale (a thing I have been called), that has no meaning in relation to your body; all that means is they are an ass.

If you like this article, please share it! Your clicks keep us alive!
Tags
bikini
body
Body Positive
Swimsuit
fat
confidence
back fat