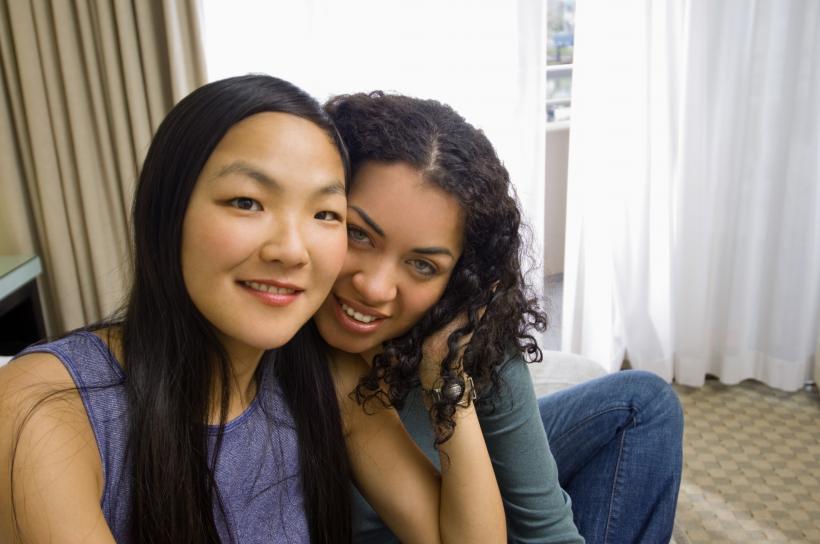 If you happen to have a homophobic family and are bringing your new girlfriend home for the first time, you’re probably feeling so stressed.

Oh, the Holigays. The super-sweet, oh-so-lovely, super-cozy time of year that we lezzies adore with every fiber of our lez beings. It’s the gayest time of year, after all. All those sparkly, twinkly rainbow colored lights strung in the shop windows and all those campy drag queens coquettishly dressed as Ms. Claus strutting around the queer bars? We are at our gayest and happiest this time of year.

However, if you happen to have a homophobic family and are bringing your new girlfriend home for the first time, you’re probably feeling so stressed that you’re contemplating crawling into a dark hole and not emerging into the daylight for the next month and a half, am I right?

No need to crawl into that hole, babes. Your self-proclaimed internet lesbian big sister is here to help you navigate the dark and stormy waters of familial homophobia.

You know. Aunt Sally’s disgusted gaze tossed in your and your partner’s direction from across the dining room table. Having your mom introduce your girlfriend to her cohorts as your “roommate” after you’ve told her not to. The insisting that the two of you stay in “separate bedrooms” when your brother and his hookup of two weeks are offered the master bedroom to themselves. The whole being told “to not to be SO ALL OVER EACH OTHER!” after you and your bae innocently brush hands once.

If your family is “GAYS SHOULD DIE” homophobic, as your lesbian big sis, I’m going to tell you right now that. You. Must. Not. Bring. Your. Partner. Home.

I once dated a girl who hailed from rural Texas. Her parents sent her to conversion therapy as a teen and physically abused her when they caught her sneaking a kiss from a girl on her softball team.

“I think if your parents met me, they would like me!” I squeaked, batting my lashes, feeling like I was super-special and could, of course, break in two Southern Baptist homophobes. This was when I was young and stupid, you see.

“That’s cute, but no,” my girlfriend barked, rightfully shutting delusional little me down.

A few years later I dated a girl who was from upstate New York. Her parents had briefly disowned her when they first realized their precious little girl liked to get down and dirty with other (not so precious) girls but had taken her back and were allegedly in the process of “coming around.” They wanted her to bring me to their WASPy annual holiday cocktail party.

“I’ll go so long as they’re not violent,” I said, puffing on a cig, now older and less caring about the dangers of being around homophobic bigots.

“Hell, no, they’re not violent! This is just uh, ‘new’ to them. It might be a little weird, but I think we can handle it,” she answered coolly.

“Alright,” I answered coolly back.

Although it was a wildly uncomfortable experience, we survived. Over the course of the next several years, after dating many a girlfriend, I learned how one should introduce your partner to your homophobic family without causing shit to hit the fan — and what to do when it does.

1. Have a glass (or two) of wine before you head over.

There are times in our lives when we just need the emotional band-aid of booze to soften the razor-sharp view of reality. I’m not saying you should get twisted — in fact, that’s a terrible idea — but I’m not above of having a velvety glass of wine to take the edge off. Now is not the time to be prim and self-righteous. Drink a little bit of goddamn wine to soothe your nerves and offer your girlfriend at least a glass, too.

If you don’t drink, substitute the wine with sex. Having an orgasm is a surefire way to calm down, and the post-orgasm-bliss state is similar to a booze buzz.

2. Be affectionate, not sexual.

Show them that you’re relaxed, in a happy relationship, and that you’re unapologetically queer. They’ll respect you more.

Families are like horses. They can smell your fear and read your body language. If you don’t want to get bucked off the horse, you must exude total physical confidence. Throw your arm around her. Clutch her hand in plain view every once in awhile.

However, this doesn’t mean it’s appropriate to stick your tongues down each other’s throats at the dinner table. No mom wants to watch her daughter be sexual with anyone, regardless of their gender. In fact, this goes for all couples, gay or straight. Don’t fondle your lover in front of your family. Ever.

3. Do not keep secrets from bae.

Do not tell your girlfriend that your brother is fully supportive of your relationship when he doesn’t even know you’re together. Do not downplay how weird or cold or crazy your family is.

If your girlfriend is caught by surprise, she’ll shut down. She’s already showing you how much she trusts and cares for you by going over to your homophobic family’s house. The last thing she needs are secrets between you two.

4. Set firm boundaries with your family.

If things get wholly uncomfortable or you can sense your cousin is drinking too much and about to say something horrendous, leave. Have a pre-planned out so you don’t stumble all over your words. Or make up some bullshit sounding excuse like “I got called into work!”

Have something prepared. Rehearse your heart out. And when it doubt, always use menstruation as your out. Nobody argues the sudden onset of a heavy period that’s going to bleed all over mummy’s crisp, white Republican couch.

If your girlfriend is feeling uncomfortable, give her a safeword. Like, if she says “These potatoes are splendid!” you meet in the kitchen to discuss whatever the hell just went down.

7. Do not take your stress out on bae.

Right now your bae is probably your safe place. This does not make it OK to treat her like an emotional punching bag. If anything, you should bestow extra kindness on the one person who accepts you and your gayness so much, she has sex with you.

And when shit does hit the fan...

Make your girlfriend your absolute priority. You dragged her into this, so you will delicately remove her from the situation if lines get crossed.

And then once you’re safe in the car, break down to her. Cry your eyes out, confide in her as to how broken-hearted you are. Let her see you vulnerable. Accept her comfort and emotional support. Three days later, write your parents the most epic letter ever to be written. In fact, it’s a gay right of passage to pen your family a long, heartfelt letter at some point in your life. You’re not really queer until you have.

Remember, as we get older we can direct our energy toward the chosen family that makes us feel safe and comfortable in our skin.

After all, isn’t that what home is? The sacred place where you can kick up your feet and feel at peace?

Stick It To The Homophobes: Why My Lesbian Wedding Will Be Unapologetically Over-The-Top
Zara Barrie

Introducing Your Partner To Your Homophobic Aunt: A Holiday Guide
Zara Barrie