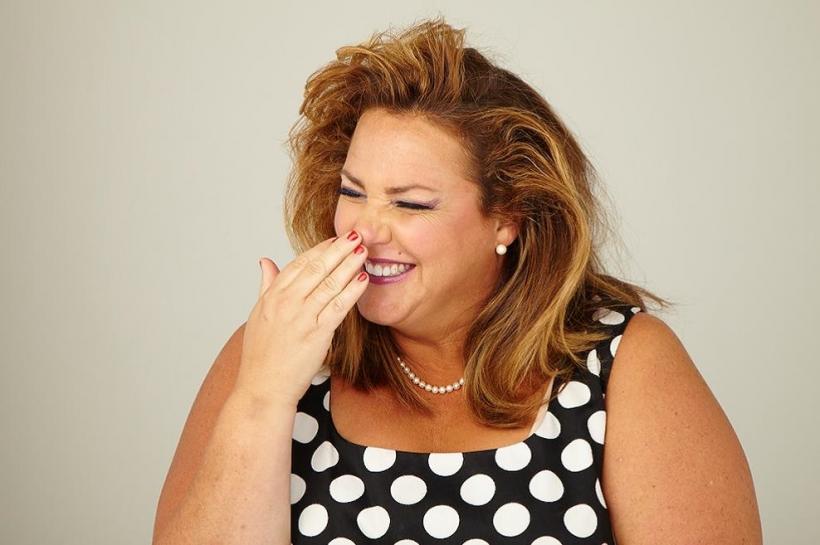 My love for Jen Lancaster’s books is, honestly, embarrassing. While I’ve always prided myself on reading serious​ celebrity memoirs, when diving into her debut book, Bitter is the New Black: Confessions of a Condescending, Egomaniacal, Self-Centered Smartass, Or, Why You Should Never Carry A Prada Bag to the Unemployment Office, back in 2006 (mostly on the New York City subway) I would laugh so hard, people would stare at me like I was crazy. I couldn’t help myself: Jen Lancaster is freakin' hilarious!

Lancaster is a blogger turned memoirist and novelist. She isn’t about taking pictures of her perfectly plated meals so much as trying not to burn down her kitchen. She loves clothing and accessories, but you wouldn’t confuse her Instagram account for a stylist’s. She goes to the gym, but doesn’t hate the way she looks. In other words, she’s on our team.

In her newest memoir, I Regret Nothing, Lancaster tries to cross things off her bucket list, going on a series of wild adventures (in a completely adult sense, of course). She’s goes to Italy twice in one year, trains for a 5K, and does the grownup version of spring break. It’s not so much Eat, Pray, Love, as it is Eat, Drink, Snark.

Jen had no regrets about doing this interview, hilariously riffing on Internet snark, blogging, and self-improvement without hate.

What made you decide to write I Regret Nothing?

Originally, I wanted to write a follow up to my didn’t-lose-weight weight loss memoir Such a Pretty Fat. This was my first book to hit the NYT list, so it was considered a success, except that I didn’t accomplish the singular goal I had in it.

I hate unfinished business, so I wanted to try again with a different approach. I decided to focus on weight loss as a subset of wellness and I theorized that if I improved all aspects of wellness, not just the physical, but the emotional, spiritual, emotional, intellectual, etc. that I’d have a far easier time doing so.

Ultimately, I realized I was creating more of a journal and less of a memoir, so I took a big step back to re-evaluate my purpose. What I realized was my overarching concern was eliminating guilt and regret from my life, as those are wasted emotions. The bucket list aspect was born from taking a more universal and relatable approach to the original project.

Do you have any regrets?

Is it glib to say I regret not trying to eliminate regrets sooner? I figure I can’t change the past, but going forward, I’ve been focusing on not creating new regrets by stepping outside my comfort zone. Thus far, I’ve been pretty pleased with the results. By pursuing my bucket list, I ended up in Italy twice last year. The first time was the trip of a lifetime, and the second . . . was a cautionary tale. (Need to know how to treat flea bites? I have firsthand knowledge.)

You've been open about your struggles with weight. In all of your memoirs, you've always discussed your desire to change your body, but without any self hate. Why do you think you are able to do that?

I have a weird version of self-esteem. While I fully believe I’m hilarious and brilliant and totes adorbs, I don’t expect anyone else to feel this way about me. I know that I’m the best Jen I can be, and that’s enough. If anyone else agrees along the way, well, that’s just a bonus.

What’s funny is when I finally realized that my weight wasn’t my problem, that it was a symptom of other things I hadn’t addressed in my life, everything changed. For anyone looking to lose weight, I urge you to spend six to nine months on introspection, focusing on improving all aspects of your personal wellnes, except for the physical. Do this and you’ll find the treadmill isn’t the hard work; the self-reflection is. The gym will no longer be the scary place that’s nearly impossible to visit. Instead, it’s the happy place where you’ll catch up on Real Housewives while riding the bike. 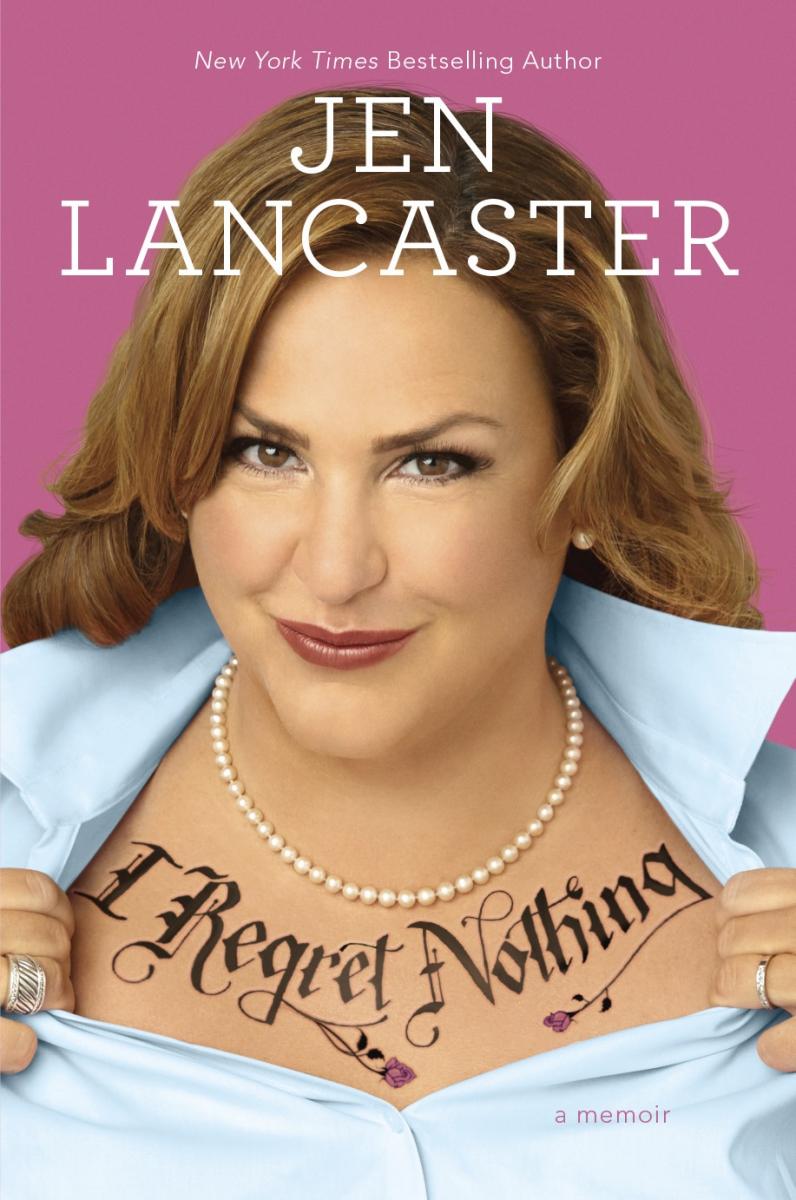 Do you consider yourself a body positivity role model?

I hope so. I’ve liked myself at each size, especially how the extra weight took years off my face. Any time I’ve felt angry or doubtful or “less than” stemmed from other issues. And yet, I’m delighted to be down 70 pounds.

Once I took the emotional element out of weight loss by eliminating regrets, it’s become a fun challenge, kind of like a tricky crossword puzzle. Watching my diet and working out are now part of how I live my life, no different than showering or remembering to take my vitamins. I obsess over exercise and calories exactly as much as I’d obsess over brushing my teeth or washing my hair, which is to say not at all; it’s simply part of my daily routine. While I might not always revel in the process, I am always happy at having done so.

I absolutely love your work (this is Ladies We Love after all) and have been following you since Bitter Is New Black. While I think your writing is so much more, do you ever get frustrated with the term "Chick Lit?" Do you find it dismissive or offensive?

Thank you! “Chick Lit” doesn’t bother me at all because I see it as a marketing term. Plus, look at the writers producing so-called Chick Lit, like Jennifer Weiner or Emily Giffin. My God, they’re amazing! Being associated with that kind of talent, even tangentially, is a huge compliment. These are some of the finest authors of our time or any other. And sure, people use these terms as a way of dismissing Chick Lit, but I believe the ability to capture what it’s like to be a woman in this century transcends any labels.

How do you write so fearlessly when social media makes it easy for anyone to criticize what you say or do or take it out of context immediately?

Here’s the thing — the books are a lot easier to manage in terms of criticism. There’s such a long lead time between the initial thought and the finished product that there’s never a danger of scrawling something in anger that turns out to be a big overreaction. I know that whatever I deliver, whatever passes through the editors, whatever anyone reads as the final product, that’s my best work.

Thing is, I don’t consider myself fearless — I only read positive reviews from media outlets. While I still need to understand what reviewers didn’t like so I can improve, seeing it firsthand is a serious shit sandwich. If anyone has an ax to grind, I’d prefer to not know.

The social media aspect is trickier. I despise so much of social media now and if I didn’t have to participate, I wouldn’t. While people are predominantly good/kind/nice, there are enough who aren’t and they ruin it for everyone. I feel like social media is far more insidious than a gossipy website. I believe social media to be dangerous because more and more people are confusing it with a “social life,” when it’s simply not the same. It’s all just so false and such a waste of time and energy, you know? Really, I could talk about this topic for a while, which is why one of my characters in my new novel The Best of Enemies is a lifestyle blogger struggling with all of the above.

You never write about sex or politics. Why do you shy away from these topics? (No judgments)

I shy away because both these topics are best discussed face-to-face. (P.S. I totally judge. But quietly, to myself.)

Bitter Is The New Black was published in 2006. Do you think the landscape has changed since then for bloggers who want to get book deals?

Yes and no. While the initial gold rush is over, there are more options now for writers. If you’d asked me about self-publishing in 2009, I’d be all, “Oh, honey. No.” But now, it’s not only a viable option, in a lot of cases, it’s the better option. The eBook was a game-changer.

Those getting deals in 2015 are much more likely to be specific types of bloggers. You don’t see a ton of contracts going to the traditional online diarist-type writer, largely because those blogs have gone out of style. Now publishers are looking for “platforms” and “social media presences” when those aren’t always an indication of future sales.

Do you have any advice for aspiring authors?

My advice dovetails into the previous question—don’t kill yourself figuring out your social media platform or buying bogus Twitter followers to inflate your numbers. While both these aspects can help, the buzzwords and the numbers ultimately don’t matter. Figure out who you are as a writer, what you want to say, and why your story needs to be told long before you worry about business concerns, such as how to find an agent or how to shop your manuscript.

Yes, the business will be important, but the work is why you’ll sell.

What is your next project?

Let’s see, The Best of Enemies (possibly my favorite book ever) comes out in August and I’m under contract for one more novel to be published in 2016.

As for memoir, I’d been writing one per year, but that’s too much. I found I need to LIVE some of my life before I can write about it, so I likely won’t have anything new for a couple of years, if at all.

Maybe I’m done telling my own story, you know? And how much more does anyone want to read about my dogs or my husband’s beard? (Note: Fletch says people will never tire of reading about his beard.)

For fun and for my own edification, I’ve been working on a genealogical search and recently learned that I’m not the first Lancaster to write fiction . . . in fact, I’m pretty sure my landed gentry great-grandfather created an entire identity from scratch. (There’s an outside chance he was Jack the Ripper, judging from the dates.) I did some poking around into his background while in London, and found no trace of him, despite the immaculate records kept by Burke’s Peerage. Plus, I had a DNA test that shatters all my preconceived notions of who I am and where I come from, yet so much in my life suddenly makes sense. I’ll definitely follow this info down the rabbit hole and if it turns into a book, great. And if not, that’s okay, too.

Buy I Regret Nothing or enjoy the hilarity of Jen’s Twitter feed!

If you like this article, please share it! Your clicks keep us alive!
Tags
Jen Lancaster
Best of Enemies
positive
no
hate
Self
Love
acceptance
author
blog
Memoir
BItter Is the New Black
Prada
I Regret Nothing
Such A Pretty Fat