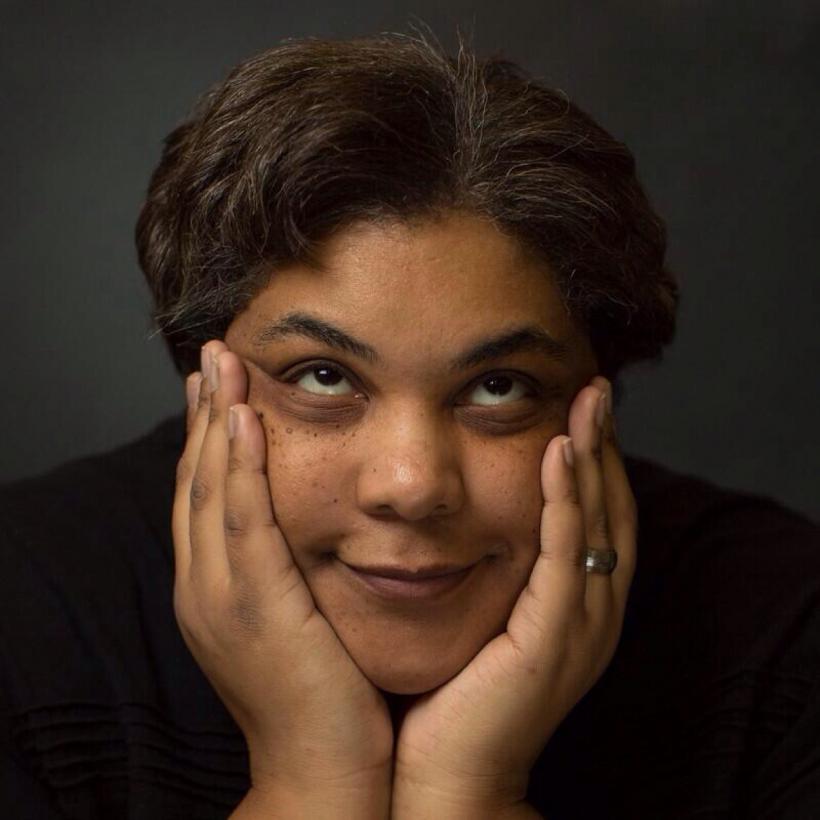 Generally speaking, the introductions for these interviews tend to run about two paragraphs long. Sometimes three. I assume by the time you're reading this, the same will be true for this one. But that will be due solely to the diligent work of one of my co-editors, who will no doubt have—for the sake of conciseness and rationality—edited my 12,000-word tome into a manageable and hopefully somewhat suitable lead-in.

But there's just so much I'd like to wax poetic about Roxane Gay.

Like the fact that there's been one and only one writer who inspired me so much when I first read her, I can still recall exactly what I was wearing at the time—tattered yoga pants, stained college sweatshirt, out-of-season Christmas socks—as I curled up on a couch under a brown throw blanket in New Jersey. Holy shit, I remember thinking after I absorbed one of her essays on Salon about how our media mishandles coverage of sexual assault, this. I clicked over to her Twitter page and thought again, but more broadly, Holy shit. YES. ALL OF THIS. In an instant, I was a staunch convert, soaking up her live-tweets of the Barefoot Contessa (a show I've still never even seen) like it was some kind of drug. I counted down the days until her now-New York Times best-selling collection of essays, Bad Feminist, was released in August, and I swear to god, I heard the faint tinkling of angel's harps the morning the book magically appeared on my Kindle. When she generously announced on Twitter that she would send any interested party one of her Bad Feminist T-shirts, I emailed her saying that as a former backpacker, there was a good chance I'd wear it nearly every day, if she wouldn't mind sending me one. To my great delight, she actually did; I do in fact wear it all the time.

And though I'm generally not one to engage in schadenfreude, I'd be lying were I not to admit that while attending the Brooklyn Book Festival this past fall in the aforementioned apparel, I didn't relish the comments and the thinly veiled jealous stares of the gaping, Bad Feminist-shirt-thirsty masses. And I do mean masses; there were hundreds of people who lined up to wade into a packed auditorium to hear her speak on a feminism panel—further proof that I'm far from alone in my feelings about Roxane Gay's writing and its power; countless of us having bathed in her words, finding solace, redemption, wisdom, and incisive humor.

As so many publications have said, the prolific author is having a "moment." My guess it's one that will last and stand the test of time—certainly outlasting my already-dulled-due-to-repeated-washing Bad Feminist shirt—given her deft critiquing of cultural events, stunning personal essays, and her masterful, sweeping fiction as found in her novel An Untamed State, a work that reminds you of the kindness of brutal honesty.

If you're not already on board, change that. Immediately if not sooner. Read her Tumblr. Follow her on Twitter @rgay. Kick off some crowdfunding efforts to get her the tiny baby elephant she so desires and deserves. Just don't miss out—and check out what she had to say about feminism, Channing Tatum's neck, her new project The Butter, and, of course, why she wants a tiny baby elephant.

You packed your panel at the Brooklyn Book festival. It was a panel on feminism and writing—and there was a line literally around the corner. People were tweeting you were the new iPhone 6. If you were in fact an iPhone 6, what would be your unique features? Or would you be a droid?

Oh I would be an iPhone 6. I enjoy sleek Apple products, and like the iPhone 6, I can't quite fit in your pocket but I'm fun to hold and touch. My unique features would be a bullshit detector and an invisibility shield.

I love your definition of feminism: "I don't want to be treated like shit just because I'm a woman." I realize this is just a tagline definition, but have your broader views on feminism evolved at all in the process of publishing a New York Times best-selling book about it?

I actually got that definition from an anthology about feminism. It was a statement made by an Australian woman named Su, but it also succinctly encapsulates how I think of feminism. That said, feminism is definitely pluralistic, but at the foundation of all feminisms, I believe women are equal to men, should be able to move through the world as freely as men, and should be able to live in bodies that are not legislated. My understanding of feminism continues to evolve and incorporate more and more intersectional thinking into how I approach gender equality.

Between teaching at Purdue, publishing two books in a year, traveling for book tours, maintaining a Tumblr, writing essays and reviews widely, working on other upcoming books, and, of course, your masterful, prolific tweeting, I guess my question is simply . . . how? Are there certain times of the day that you set aside strictly for writing? Do you ever tweet while you're in "intense writer mode"—if, indeed, that's even a mode you switch into?

I have no idea how I do it all. I don't sleep much and I live in the middle of nowhere and I don't have kids and I love what I do and I am ambitious. I don't have any sort of schedule for anything. It's definitely one of my greatest flaws. I do tweet when I'm in the throes of writing. There are few times when I won't tweet.

What do you think you do best as a writer?

I cut to the bone of emotion pretty well.

Although at the moment you may be enjoying popular recognition for your nonfiction and essay writing, your fiction is also stunning. (The broken completeness of protagonist Mireille and the general plainspoken complexity of An Untamed State made it one of the best novels I've read.) Do you identify with or prefer one mode over the other?

Fiction is definitely my first love. It was what I started writing first and I love how I can lose myself in the stories I write.

Your writing never shies away from complexity. Instead it's marked by deep nuance and a palpable empathy for people and our inevitable imperfections. As just one example of your views, you've said, "All too often, we have this reactionary notion that if we disagree with one or two or three ideas a person has, we must disavow them. That is a deeply impoverished way of living." What drives this richer, more thoughtful approach? Does your active presence on Twitter help or hinder this?

Maturity is the biggest drive in trying to be more nuanced in how I write about the world. The older I get, the more I realize that most of us are doing the best we can and are still willing to learn how to do better. And of course, maturity has helped me realize that there is more than one valid way of seeing the world, though I am also going to advocate my point of view vigorously.

Twitter mostly helps in that I can have interesting conversations with people outside of my social circle. At the same time, there is a lot of trolling on Twitter that makes me dig my heels in deeper and makes it harder for me, in those moments, to consider other points of view.

You introduced yourself at your panel in the Brooklyn Book Festival as a writer—and as someone who's obsessed with Channing Tatum's neck. I believe you expressed that you "just wanted to bite it." Is there a film you have in mind that best puts it on display? Of the Channing Tatum canon, I'm partial to Magic Mike but if I'm being honest, I'm struggling to understand the neck fixation.

His neck is so broad and thick. I love it. I love all of him. His neck is finely displayed in all his movies but especially Magic Mike and 21 Jump Street. Mmmm. I love him.

You've joined forces with Mallory Ortberg and Nicole Cliffe of The Toast to create a sister site called The Butter. Publisher Nick Pavich has said, "Basically, our radical vision for the network is that women should run media for other women." Given that you've signed on to the project, how would you articulate the value of this?

It is so important for women to have editorial control and financial support for creating and editing content. We can't just follow. We need opportunities to be leaders.

Beyond obvious cuteness, what is it about baby elephants that makes you covet one?

I love them. I want one I can hug and play with and comb its hair. They are just perfect and so I want one.