#LoveLessons: 7 Steps To Stop An Argument In Its Tracks 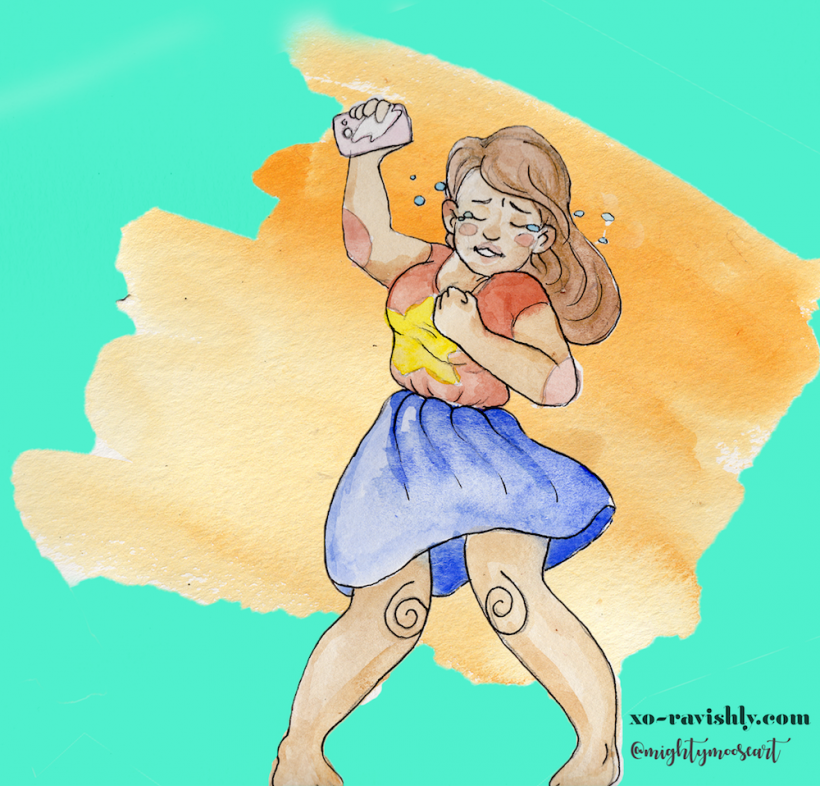 #LoveLessons is a brand-new bi-weekly column devoted to the discussion of, yep, love. We’ll talk about how to celebrate it, how to make it better, how to keep the sex life flourishing (don’t have kids), how to get your partner to pick up his, I mean their, underwear (girls leave underwear on the floor, too.)

Have a question or topic you’d like to discuss? Email, lovelessons@ravishly.com.

How am I qualified to talk about relationships?

I’m not. Unless you want to talk about STDs or how to make a baby, those are things I’m actually medically trained to do.

(I don’t know if you know this, but Dear Abby was not written by a psychotherapist.)

In the first year of my first marriage, I threw a phone at my husband. We didn’t have cell phones (because it was 1993 and we were broke as shit), but we did have a cordless phone, and it was heavy, and it did have good range (and I do not mean the distance from the base that you could travel).

The phone didn’t hit him, which in retrospect is good, but at the time, was a real letdown. I just don’t have very good spatial awareness.

The same year, I also threw two butter dishes, at least a few food items, and I think a glass. It was an expensive year in housewares.

I’ve had a lot of arguments in my marriage(s). The vast majority of them didn’t involve the employ of any hard object in flight, but a few did.

I’m telling you this because I haven’t thrown anything in a long time, which I think means I’m getting this figured out.

My husband and I have been married seven years. Our marriage is mostly great. And occasionally not great. And by not great, I mean real rough.

One of my friends once told me that she and her husband never fight, which to me seems completely impossible, but I guess some folks aren’t born with a built-in butter dish pitching mechanism.

My husband and I do fight. I think most couples do. I think that’s normal.

I also think it stinks out loud to have discord in the one relationship in your life that should be the safe one. I don’t think anyone loves to fight (except my mom), so here are some really effective (and maybe hard) ways to stop a fight in its tracks.

The order in which you employ these steps may vary depending on what stage the argument is — are you just bickering about who is cooking dinner (get takeout?) or did someone just throw their iPhone across the room (I hope you have insurance)?

Walking away when flames are shooting from your head is… hard.

But trust me, do it.

There is science somewhere that has shown that it takes 20 minutes for the endorphin I AM GOING TO THROW A PHONE AT YOU hormones to chill out.

After you walk away, take some deep breaths, meditate, go for a walk, take a bath, cry. Whatever you do, do it for at least a half hour.

2. Agree to be respectful.

Now that your hormones are chilled out, it’s time to get to the resolution. Step one, agree to be respectful.

I know that you might want to kick your partner in the kneecaps, but don’t. Also, no name calling, no yelling. This is a good time to set boundaries around the argument. Maybe you want to agree that there will be no cursing and no mention of divorce. Sometimes you want to yell “I’M GETTING A LAWYER.” But don’t.

Compose a calm and concise statement about what you’re feeling. Allow your partner to do the same.

DO NOT INTERRUPT EACH OTHER.

Also, no throwing during this time.

Sometimes it helps to write down your thoughts and read them.

4. Recognize that you both feel that an injustice has been done.

I know what you’re saying, “But this was HIS/HER fault.”

But they are saying the same thing.

Even if you can’t be empathetic, you can acknowledge that you are both angry/passionate/upset. Those feelings are valid, as all feelings are. So you’ve gotta let your partner feel them.

It’s hard to be vulnerable when you’re fighting with the person who you expect to have your back, but vulnerability is the real key to understanding, and ultimately, resolving the problem.

Let me tell you something that will blow your angry mind. Underneath every argument, there is fear.

If you dig deep enough, you will find it.

Example: The most volatile argument my husband and I have even been in was over a trumpet.

We bought a new (very expensive) trumpet for my oldest son, Sean. It was important to me that he have a beautiful instrument as he’s pursuing music professionally. I wanted to give him the trumpet at the beginning of his senior year of high school. My husband wanted to wait.

We had a fight about this, and I ended up giving Sean the trumpet, without Matt there.

My perspective: what’s the BFD?

His perspective: why couldn’t you show me the courtesy of at least including me.

Once we dug deep, and I mean REAL deep, my husband finally revealed that he had wanted to be included because music is the thing he and Sean share in common. Because of this common passion, this would have been an opportunity for them to bond.

When we dug even deeper, we found that he was worried about connecting with Sean, and even all of the older kids. It’s hard being a stepparent.

His fear: my kids will never love him.

From my perspective, I let my kids down by divorcing their father. My new marriage offers a financial stability that I didn’t have before (and thus the ability to purchase aforementioned trumpet). To my mind, the capacity to give Sean what he needed would somehow negate the anger and betrayal he feels surrounded the divorce.

My fear: my kids will never forgive me for the divorce.

So, if you can, take a few minutes to dig into the problem. If you go down far enough, I bet you’ll find fear.

Emotional intelligence means you can identify your own feelings AND the feelings of others.

Can you manage your emotions? Can you recognize emotions in your partner?

If not, practice until you can.

This is for them, but also for you.

When the fight is over, it’s over. Don’t revisit it in five years, even if you have the memory of an elephant.

You gotta let that shit go.

If you like this article, please share it! Your clicks keep us alive!
Tags
marriage
Love
advice
Relationships
conflict resolution
#LoveLessons