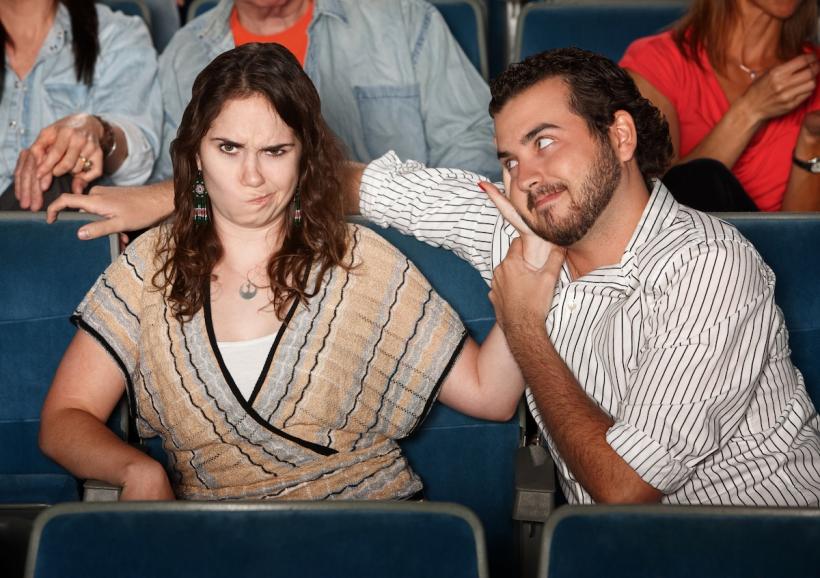 This case is the perfect example of the dangerous sense of entitlement men often feel towards women.

On Thursday, May 11 in Austin, Texas, 37-year-old Brandon Vezmar filed a lawsuit against a woman he met on Bumble, claiming she spent their date — a trip to the movies to see Guardians of the Galaxy Vol. 2 — texting, before ultimately ending the date early. The woman is now being sued for $17.31 — the price of her movie ticket. In a comment made to Texas Monthly, Vezmar said he filed the lawsuit because “men are being exploited by people like the defendant.” Vezmar took it even further, though, sending Facebook messages to the woman’s friends and family, asking for her address and the money he felt he was owed, before publicly sharing text messages he exchanged with the woman.

While some outlets are going so far as to call this man a “hero,” this case is the perfect example of the dangerous sense of entitlement men often feel towards women.

It exemplifies the misogyny and toxic masculinity that surrounds our society’s dating culture.

As a woman in my twenties, I’ve experienced this firsthand. Before the recent election, I went out with a man who spent our entire date talking about his love for Donald Trump. He told me that success should be measured by the attractiveness of a man’s partner, and thought Trump would make a great president, because “look how hot his wife is!” When I asked if he was kidding, he pulled up a picture of Melania Trump on his phone, pointed to her chest, and said “look at those,” before telling me I would “do for now.”

Though upsetting, stories like these are not uncommon, because we live in a society that perpetuates a culture of sexual entitlement, as a means of sustaining volatile masculinity. Women of all ages, all over the country (all over the world) know all too well the ways in which men behave as though they have an inherent right to our bodies and our time.

In response to Brandon Vezmar’s recent lawsuit, and the fact that he feels he’s been “exploited,” I’ve compiled a list of stories from real women to prove just how problematic dating culture is when men like Vezmar believe women owe them something.

I once went on a Tinder date with a guy I'd been texting with for a week or so. Upon meeting him, he asked me if “he should plan to buy dinner or if drinks would do it.” I asked what he meant, and he said, “Just wondering what the barrier to entry will be.” I stared at him in confusion until he clarified, “Are we fucking tonight?”

I'm a soccer fanatic and spend my Saturdays at the pub watching games and hanging out with other soccer fans. It's one of those places where regulars all know each other and sit together and mingle. One day, there was a new guy. He seemed cute, but I didn't think anything of it. A few days later he showed up again, and my best friend introduced us. We ended up chatting, and he asked me out.

We went out the next Friday. We saw a show but stopped at the pub for a drink first. While there, one of the regulars pulled my date aside, and basically called me a slut. He told him I'd slept with everyone there, etc. All of this because I had turned him down. When my date came back to the bar, he was acting moody all of a sudden. When I asked him what was wrong, he said: "Well turns out you've fucked everyone in here."

I went on a date with a guy who seemed great on his profile —seemingly intelligent, a penchant for flamboyant blazers. What more could you want? But on the date, he was telling me a story about a friend of his, and he casually mentioned that the friend, who was in the military, came home from duty to find his wife in bed with another man, and proceeded to beat both of them with a golf club. He was laughing as he said the judge dropped the charges, sympathizing with his service to the country. I was mortified and asked if the victims were alright. He said, "Oh yeah, he hit them with the shaft, it's pretty light."

The acceptance of such violence was horrifying to me. Needless to say, no second date.

I briefly worked for a niche design publication in NYC a couple of years ago and had to go to launch parties and events. I was at one release party where some guy who was clearly crashing just wouldn't leave me alone. I was sitting on a couch, adding some notes to the interview I just conducted, and he sat down super close.

"Why are you on your phone at a party? You just stuck up or something, because you're pretty."

I moved away and said I was working and wasn’t interested. He continued to inch closer, giving me backhanded compliments, telling me I should listen to him because he teaches women's studies and sociology as an adjunct at Columbia and NYU. (I have my own academic record. I'm not impressed by his.)

I finally said, “Oh good, so you already know the definition of harassment; I'm not interested, leave me alone.”

Guy couldn't let this go, so he went on to put his really drunk face next to mine and told me that I shouldn't be so bitchy and stuck up because my looks won't last forever.

We met on OkCupid. We talked a bunch and decided to meet. Kind of last minute, I asked him to meet a friend and me at another friend’s concert. I remembered he liked metal music and if it didn't go well, I had someone there to bail me out.

I told him in advance my friend would be there and asked if that was okay or we could meet another time. He said he would meet us, and sounded like he was on board. When he met us, he didn’t even acknowledge my friend. We made awkward small talk, then while drinking a beer, he started telling us about how he was in jail for drug dealing and previous alcohol abuse. I try not to judge people on their past, but that was literally all he talked about.

At the end of the night, I thanked him for meeting me and told him I wasn't interested in pursuing anything further. He seemed cool about it and left. The next morning, I woke up to 15 texts from him calling me a bitch for not wanting a second date. I didn’t respond.

The Year Of The Christmas Tree
Ariel Henley

"In the Service": A Comedic Look At Being A Woman In The Food Industry
Ariel Henley