Take The Cake: To The Man In Seat 36D Who Fat-Shamed Our Flight Attendant ​ 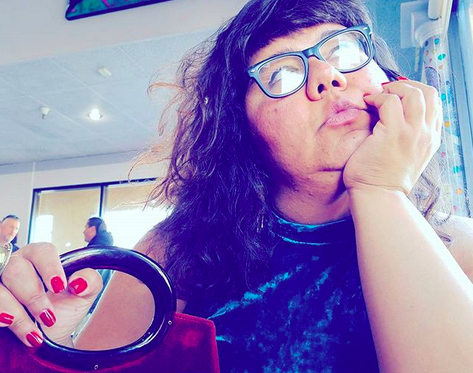 You don’t know me, but I was in 37B on that United flight from Denver to San Francisco.

I was in one of those half rows near the exit, sitting next to a man who stared at me in the most authentic way — teetering between a vaguely sexualized curiosity and bewilderment. He chanted — finger tips tented and eyes closed — whenever there was turbulence.

When it was time for beverage service, I saw our flight attendant from the corner of my right eye, just a shadow at first and then she came into view. I saw that she was fat. A fat flight attendant! She and I were around the same size. My little fat girl heart — the one that’s the most real, that jumps and hollers at things I didn’t even know I still needed to see, to imagine, the one who reminds me that after all these years of emotional arms race that, yes, there’s still a tiny person inside me who hopes for and loves everyone, everything — actually fluttered.

I blinked in amazement that she existed, that she was possible. The thought “You mean I could grow up to be a flight attendant?!” legitimately crossed my mind.

And not a beat passed before you, Man in 36D, ordered a bottle of red wine and then began to make fun of her as she turned her back to you. You looked over at your son and drew the outline of her body cartoonishly with your hands, dramatically opening your eyes to express your comical surprise at this woman’s size — a whole miniature drama — before she turned around and you threw on a Cheshire cat smile, but just a second too late.

I looked up at her, her face. She knew. We always know.

Your body is hunched from years of conformity, years of making fun of women behind their backs, years of being in sales (why does every dude in sales have the same haircut, same button-down shirt, same low-waisted slacks, same humid charisma?) or maybe insurance and the toll of always having to know who’s above you and who’s below. You don’t know that this feeling that permeates your day, that shapes your bones, is self-hatred; you think it’s other people’s failure.

Your young son — maybe 14, delicate, small, obviously kind or at least sensitive — sits next to you, black hoodie pulled over his face, black pants. He loves you. He wants to be loved by you. He plays video games, tries to be even smaller so you can’t turn him into you. Instead of loving him, you make him a reluctant accomplice in your cruelty. He lets you; he loves you that much.

Man in 36D, what happened to you? What (or who) shaped you into someone who could take so much from others? Who stole from you the ability to see the humanity all around you?

I wanted to jump across the aisle, mouth frothing in your face, spit dripping into your glass. I imagined the event happening; no one else having noticed what you did, you telling me I’d misunderstood and acting like the bereaved party, people all around me being shocked by my overreaction. I didn’t want to have that rush of adrenaline that would make me nauseous for 12 hours.

So I sat there staring at you, writing a short note that I wanted to slip in your pocket but ultimately just left in the bathroom conspicuously addressed “To Man in 36D” on the gray-blue counter.

As we began deplaning, I looked over again, and there was a different fat woman on the end of your aisle. She was the same size as me and the flight attendant. She was looking at you with unmitigated disdain and embarrassment — that look I’ve seen on so many women’s faces for as long as I can remember.

She was your wife, it turned out.

She mouthed the words “shut up” to you — elongating the words, like she could impart the magnitude of her dissatisfaction in 2 syllables — as you commented on how long the process was taking. Oh, she hated you. She hates you so much. And in her face I saw your life — a loneliness so deep and so dumbfounding it could only go deeper. You had lost the ability to imagine a way out.

I was happy to be off that plane, back at SFO. And as I left the airport, I invoked the patron saint of fat babe flight attendants and asked her to protect the gentle spirit of my newfound career icon and to open your heart, Man in 36D — but maybe not before she makes you trip and fall on your stupid, bigot face.

If you like this article, please share it! Your clicks keep us alive!
Tags
Virgie Tovar
take the cake
body image
fat shame
Flying