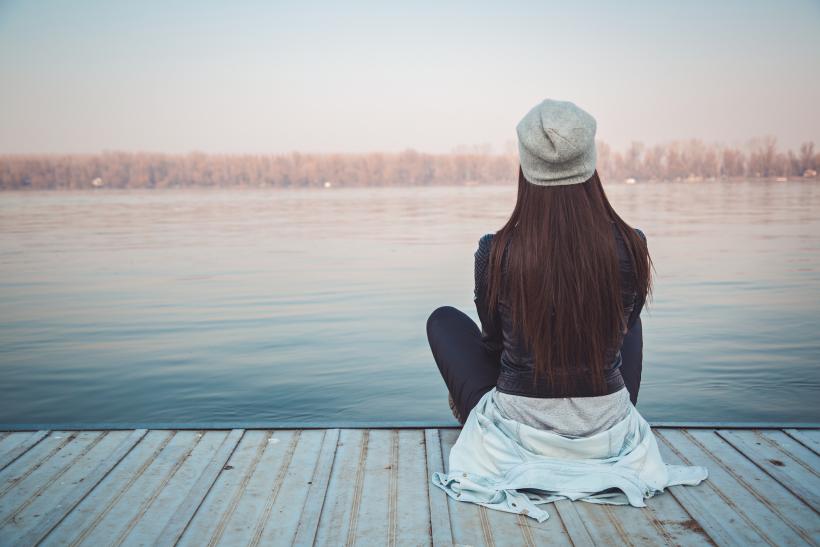 It took things getting a lot worse before I was ready to get better.

I’ve bounced in and out of therapy since I was in high school. I had a lot of one-time-only appointments with professionals who probably could have helped me if I had let them. In high school, I went to the school counselor once because a teacher was worried about me. I went to a nutritionist once in college after I let it slip to a therapist that I had been forcing myself to throw up.

I did try to stick with therapy, once. I sought it out again in high school when I noticed I was going through something more intense than teenage angst. My first therapist was a Vermont style multi-tasker: first, she was my chiropractor — and then my counselor. I met with her every couple of months over the span of two years.

I wanted an easy way to make it go away, and a medical diagnosis didn’t feel like an easy solution.

I went to college and was back in a deep depression within less than a year. I didn’t leave my room for days on end and would lay around watching Disney movies and crying. So, I made a second attempt at getting counseling. I went to a therapist on campus who told me to make a list of things to do that make me feel better when I felt sad. That was an impossible assignment for someone who couldn’t identify emotions as they arose. The concept of coping skills was entirely foreign to me.

She told me that I showed classic signs of clinical depression. Upon the suggestion that I speak to a psychiatrist, I was annoyed. I wondered how a clinical diagnosis could make any difference from what I’d always experienced. I wanted an out. I wanted an easy way to make it go away, and a medical diagnosis didn’t feel like an easy solution. Going to a psychiatrist was another thing on a list of things to do that I was not willing to check off.

Before even being prescribed medication, I rejected the hypothetical possibility. I was convinced that going on anti-depressants would make me numb to the world. I only paid attention to the stories of people who claimed medication didn’t work for them. I was searching for a definitive answer on what to do, and I listened closely to the voices that were critical of medical solutions. I paid the most attention to people who didn’t encourage me to find my path to healing.

Stigma about mental illness was encoded into my inner schema. It was so deeply embedded in me that it prevented me from even trying out possible solutions.

Going to a psychiatrist scared me. I was horrified by the suggestion that I had a mental illness. I believed psychiatrists existed within the confines of a narrow, stereotypical image. I wrote in my journal, “Do I really need to be seen by a PSYCHIATRIST? In a leather chair and all? Laying down and baring my soul? It seems so fake, so forced and not personal. I don’t want a doctor to evaluate me; I want to be HEALED, not TREATED.”

I stopped seeing the counselor and never went to the psychiatrist she referred me to. It was my pattern: if therapy got too intense, if I started feeling better, or if I was referred to a psychiatrist, I’d just stop going. I couldn’t wrap my head around the idea that I had a mental disorder. I had depression. I have lived with major depressive disorder since I was a child. It is a chronic condition that I denied was a real medical problem that required treatment.

Nothing got better, of course. Every day was a struggle to get up and go to class. I found no meaning in anything I did. I had no desire to be with anyone; I didn’t even want to eat lunch with friends. I lost my usual ability to be cheerful and friendly and instead was stumbling around in a haze of chronic fatigue. I was always tired, flipping between days on end when all I could do was sleep and insomnia coupled with exhaustion.

I tried a lot of things to pull myself out of depression. Running was a major mood booster and helped me overcome really challenging emotional reactions. It helped, but it didn’t cure me. Ignoring and suppressing my sorrow kept me in limbo between despair and joy. In that space, I was putting myself in harm’s way. I didn’t develop a stock of resiliency or a strong sense of self.

It took things getting a lot worse before I was ready to get better.

Life threw a lot of traumatic experiences my way in a short amount of time, and I developed post-traumatic stress disorder. I had to get help — or I was going to die. I found a therapist and I found a psychiatrist. I accepted suggestions, tried medications, and focused on therapy.

Now that I have consistent mental health care and follow a treatment plan, it's as if I've been given an extra moment to think about what my mind is doing. I can recover a little quicker than I used to, and I can sometimes react differently than my instinct tries to make me. I have never felt more stable than I do right now. If someone had told me I could feel this good someday, I would not have been able to comprehend the possibility because it used to be so far outside my experience of the world.

If you like this article, please share it! Your clicks keep us alive!
Tags
mental illness
mentally ill
mental health
mental health stigma