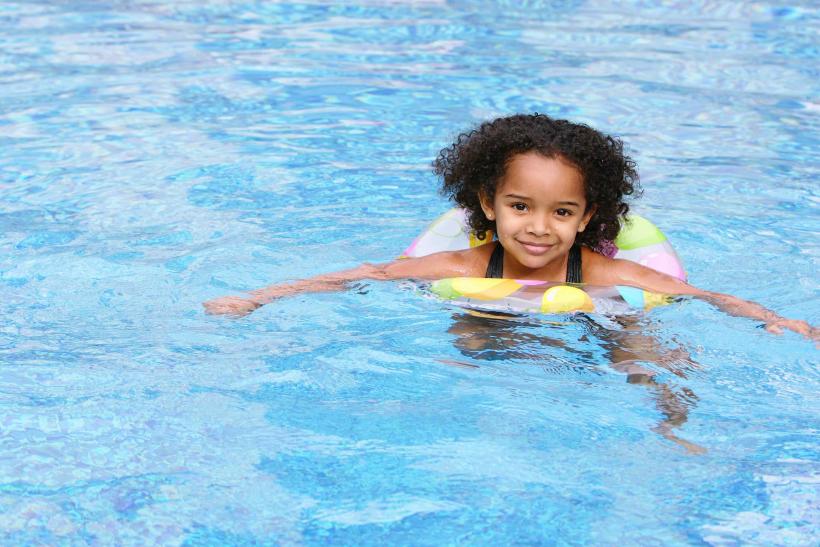 Her arms stretched out. I listened as her laughter skipped across the surface of the pool like a stone sent out with a perfect flick of the wrist. It was time to practice jumping into the pool again, under the watchful eyes of her instructor. I watched, eyes wide, and held my breath. She confidently reached out for her instructor's arms and disappeared in a splash.

This moment, now a memory, took place seven years ago. We lived in Tucson, Arizona and were grateful for the extended warm season that allowed more time for things like swimming lessons. My daughter was three and fearless, and yet, I couldn’t breathe.

My breath picked up again, shaky, not even seconds later when her head broke the surface and her laughter rang out.

Eliana and her instructor were practicing "scoopers and kickers" (the toddler-friendly terms for strokes and kicks). I watched as they made their way across the length of the pool twice before my heart relocated itself to my throat. I heard my little girl speak: “By myself!”

The pure joy in her voice was unmistakable, but her confidence terrified me. I fought the urge to stand up and yank my child from the pool to keep her safe.

Peas. I hate peas, I thought. I hate peas, and they are her favorite vegetable. I had been so worried my hatred of peas would somehow pass onto Eliana, that she would despise them if I had given her a reason.

I wasn’t going to give her a reason to be afraid of swimming, though.

Up until Eliana declared she was ready to swim solo in an Olympic-sized pool during one of her first seasons of swimming lessons, her body had been kept afloat by the instructor’s outstretched leg as she hopped backward on the other foot. Now that Eliana wanted to go it alone, I reasoned that the instructor would congratulate her on her confidence before gently redirecting her.

"Soon, but not quite yet," she’d say. That’s what the instructor was supposed to say.

Have you lost your mind? She's three! She's innocent! She's mine! I thought these things but did not say them. No matter how badly I wanted to, I thought, again, about peas.

You Might Also Like: To The Mom Who Criticized My Parenting In Front Of My Kid: Eff You

In the water, I watched my little girl nod her head enthusiastically when she was asked once more if she was sure she was ready. I bit the inside of my cheek as I watched Eliana and her instructor begin the process of scooping, kicking, and balancing her little body, keeping her head above water. On the count of three, Eliana was released to scoop and kick on her own for a fraction of a second before she started to go under. She sputtered as the instructor lifted her body back up above the surface.

Eliana wanted to stop. I wanted them to stop. I would have stopped if it had me in the water with her. And I was suddenly grateful that I was not.

"No, we can't stop in the middle of the pool, silly!" her instructor said cheerfully. "We need to scoop and kick to the other side so we can practice some more!”

My fear melted when I saw my little girl nod her head, determined.

She scooped and kicked, and the instructor expertly gave her a lift with one leg. The pattern was repeated, again and again, each time gifting my daughter with the newfound confidence I could never have given her on my own.

As each moment came to pass, I relaxed just a little more. She wasn’t the only one learning to let go.

If you like this article, please share it! Your clicks keep us alive!
Tags
parenting
motherhood
letting go