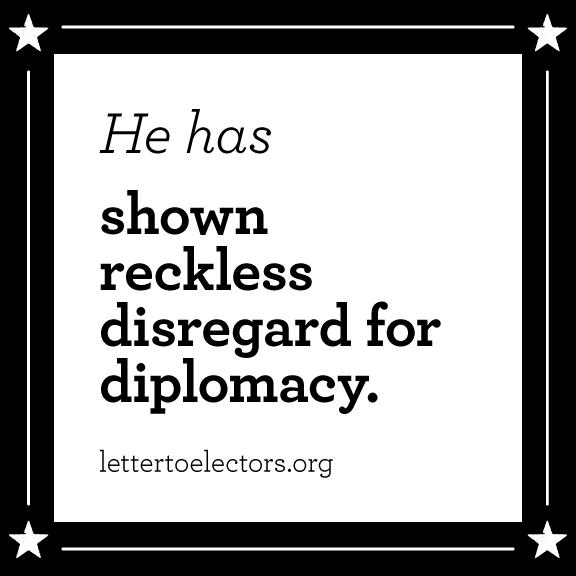 HAVE YOU SEEN THIS?

In the event that you've haven't seen it, here it is. And cue me sobbing uncontrollably. 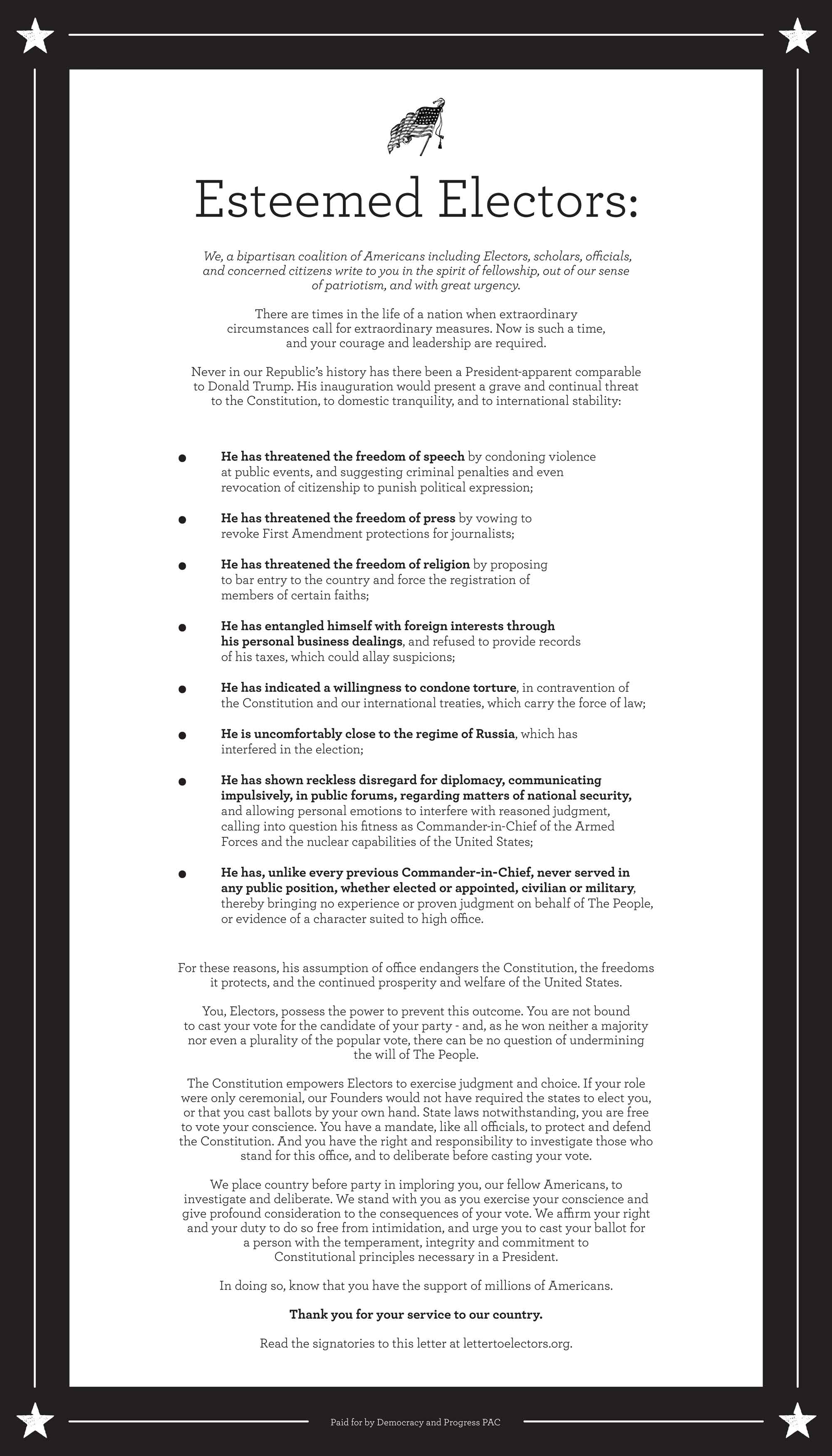 Here's a full copy of the letter:

We, a bipartisan coalition of Americans including Electors, scholars, officials, and concerned citizens write to you in the spirit of fellowship, out of our sense of patriotism, and with great urgency.3

There are times in the life of a nation when extraordinary circumstances call for extraordinary measures. Now is a such time, and your courage and leadership are required.21

Never in our Republic’s history has there been a President-apparent comparable to Donald Trump. His inauguration would present a grave and continual threat to the Constitution, to domestic tranquility, and to international stability:15

·       He has threatened the freedom of speech by condoning violence at public events, and suggesting criminal penalties and even revocation of citizenship to punish political expression;

·       He has threatened the freedom of press by vowing to revoke First Amendment protections for journalists;

·       He has threatened the freedom of religion by proposing to bar entry to the country and force the registration of members of certain faiths;

·       He has entangled himself with foreign interests through his personal business dealings, and refused to provide records of his taxes, which could allay suspicions;

·       He has indicated a willingness to condone torture, in contravention of the Constitution and our international treaties, which carry the force of law;

·       He is uncomfortably close to the regime of Russia, which has interfered in the election;

·       He has shown reckless disregard for diplomacy, communicating impulsively, in public forums, regarding matters of national security, and allowing personal emotions to interfere with reasoned judgment, calling into question his fitness as Commander-in-Chief of the Armed Forces and the nuclear capabilities of the United States;

·       He has, unlike every previous Commander-in-Chief, never served in any public position, whether elected or appointed, civilian or military, thereby bringing no experience or proven judgment on behalf of The People, or evidence of a character suited to high office.

For these reasons, his assumption of office endangers the Constitution, the freedoms it protects, and the continued prosperity and welfare of the United States.

You, Electors, possess the power to prevent this outcome. You are not bound to cast your vote for the candidate of your party – and, as he won neither a majority nor even a plurality of the popular vote, there can be no question of undermining the will of The People.

The Constitution empowers Electors to exercise judgment and choice. If your role were only ceremonial, our Founders would not have required the states to elect you, or that you cast ballots by your own hand. State laws notwithstanding, you are free to vote your conscience. You have a mandate, like all officials, to protect and defend the Constitution.12 And you have the right and responsibility to investigate those who stand for this office, and to deliberate before casting your vote.

We place country before party in imploring you, our fellow Americans, to investigate and deliberate. We stand with you as you exercise your conscience and give profound consideration to the consequences of your vote. We affirm your right and your duty to do so free from intimidation, and urge you to cast your ballot for a person with the temperament, integrity and commitment to Constitutional principles necessary in a President.

In doing so, know that you enjoy the support of millions of Americans.

Thank you for your service to our country.

The world is a shitshow, you guys. Aleppo. Standing Rock. Refugees. Rick Perry nominated as energy secretary (HE FORGOT IT WAS EVEN A THING YOU GUYS). Ohio Gov. John Kasich went ahead and signed a bill to make abortions after 20 weeks illegal. AND TRUMP.

Look, I don't know if this will work, but at this point I'm willing to try anything, including, but not limited to: installing a flagpole with a spotlight in my front yard,  burning sage around the entire country, driving to the house of every member of the electoral college with a Hickory Farm beef log and/or sending them all Harry & David cookies.

We are on the verge of something huge. Either the most inept leader in history taking office OR the Electoral College being like, "Nah."

Dear People Who Wrote a Letter to The Electors,

I feel like you must have read my article yesterday.

I’m holding out hope that some sort of miracle is going to occur before the inauguration in January. And should Donald Trump be ousted, even if it’s Kanye that ends up in the Oval, I hereby swear to the one and only God in heaven (that I don’t believe in), that I will pray every day, keep the Sabbath holy, obey all 10 Commandments (probably), buy only fair trade organic, wear only clothing made from a women’s collective in Nepal, and stop using Amazon Prime.

If Hillary becomes president I will know that God is real and He has reserved a place in heaven for all of you and every member of the electoral college that acknowledges the ineptness of Donald Trump with a vote for Hillary.

Joni Edelman, EIC ravishly.com and every person on the Ravishly staff and everyone in my immediate family (except my dad)

Can I get an amen?

If you like this article, please share it! Your clicks keep us alive!
Tags
Trump
Clinton
Election
President
electoral college
vote
constitution