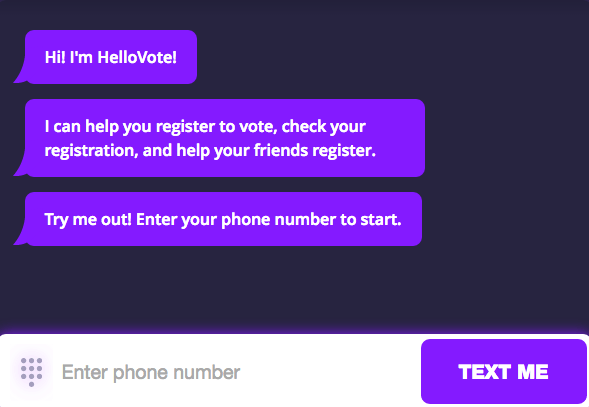 Voter registration for the 21st century.

When my son was six years old, I took him into the voting booth with me, so he could experience what I consider the sacred duty of each American citizen: casting a vote on Election Day.

This year’s Presidential election is no joke. It is not a time to sit it out, even with the high level of disgust around the low-level circus that has been transpiring. It’s also essential to acknowledge the consequences of down-ballot races, particularly in response to ongoing Congressional gridlock.

And there's no better time to get prepared to vote than tomorrow, September 27th, National Voter Registration Day.

And to help with just that, HelloVote is jumping into the fray to activate underrepresented constituents, helping them get registered to vote -- with the ease of a simple SMS text or Facebook Messenger.

Under the umbrella of non-profit group Fight for the Future, HelloVote has partnered with a variety of groups (from Rock the Vote, Care2, and MTV to SEIU California, LatinoVictoryProject, the Asian American Resource Center, and Twilio) to get the word out.

The protocol is simple. No muss, no fuss. HelloVote lowers the bar to registering, tapping into the reality that 90% of Americans possess a mobile phone.

Previously, barriers based on outright confusion, travel time, weather conditions, and inconvenient hours factored into the low numbers of voters showing up to register. But HelloVote removes those obstacles, all while complying with voter regulations in all fifty states.

The protocol is simple, and takes about sixty seconds to accomplish. No Internet required. By going to hello.vote and texting 384-387 on your phone, the registration process is prompted. Another option is to go to m.me/hellovote in Facebook messenger.

One of the co-founders of HelloVote, Tiffiniy Cheng, stated, “HelloVote is a revolution in democracy, making and bringing voter registration out of the dark ages and into the current cycle, hopefully making the difference for people who may never have registered, but can now by text.”

This connectivity is key, especially as millennials are a top target group for voter outreach.

New laws have challenged voters rights nationwide, and voters are once again fighting voter suppression tactics. HelloVote is an antidote to those whose agenda is to knock specific voting blocs out of the picture.

The goals of HelloVote are put succinctly by the Executive Director of Presente.org, Matt Nelson. “This kind of innovation moves us toward a more just, more democratic country that includes ALL of us,” he noted while adding, “especially our families, friends, and neighbors who are heavily impacted by racial, economic, and gender injustice."

Or as President Obama has said, “Don’t boo — vote!”

If you like this article, please share it! Your clicks keep us alive!
Tags
election 2016
Politics
voting
Millennials
tech