So, I have no real intro for this article. Except to say that while most of my friends on social media are in a complete uproar over season four of Orange Is The New Black (OITNB to the rest of us), I am standing at full attention, giving Jenji Kohan the loudest slow clap in the history of slow claps.

I might lose some friends for this, but I ask you to read me out.

The other day, my girlfriend posted this article on her Facebook timeline with the caption “Lindsay telling truths again. All this = all my feels.”

Now, this is a dear friend, and I know that she is someone I can speak openly with about my lack of understanding regarding the LGBTQIA community. I read the article and told her that while it was well written, I just couldn’t agree with it. I wondered if she was open to discussing it. She was.

This is what went down on Facebook messenger (Editor's Note: SPOILER ALERT! Also, this exchange has been edited slightly for publication):

Friend: Thank you for engaging me in dialogue! I really want to talk more about all this because I'm also in the position of not watching one of my favorite shows because I'm frightened of what might be happening. I appreciate you. Tell me more. I'm listening.

I feel like this: Jenji is a writer, living in the same exact world I am. She sees what is happening unilaterally, and intersectionally. My guess is that she is as fed up as I am about the inaction of our government when it comes to protecting black and brown lives, as well as LGBTQIA lives.

As a writer, you know as well I do that when frustration reaches an all time high, there's no room left for niceties. There is no room left for white gloves and keeping our hair out of our face. I think she went in, and she went hard and raw and real. And I applaud her for it. Because you know what? People are talking. That wasn't just Poussey, a black gay woman who died. That was Eric Garner saying, “I can't breathe!” That was Mike Brown being dead in the street for 17 hours. That was Tamir Rice and Trayvon Martin being mistaken for violent kids.

Sophia being beaten in her cell — that's Sandra Bland AND Rekia Boyd AND Goddess Diamond. Jenji (for me) made us face the atrocities head on.

It's one thing to say, "It's so sad what happened to Eric Garner," and then change the channel. But when we see it happen to a character we deeply love and identify with, we are pissed and livid and demanding change ON TV. I *think* she is subtly saying, "If THIS pisses you off, then everything happening around you should piss you off MORE. Because this is a show. Face the truth. Get pissed at the truth. Demand change in the truth.” And that's my take on it.

Again, I might be biased (or dense), but please know that i am just as horrified by what's happening in the LGBTQIA community. I am an ally, and I haven't been able to write my . thoughts on Orlando because it just hits too close to home.

Friend: All of this is so important, thank you for opening up!! I'm kind of relieved to know that the writers actually did convey the feeling of loss. My biggest worry is retraumatization. Did you feel at all a sense of, hm, I guess, unnecessary grief in the story?

Me: Honestly, no. I did not feel that the grief was unnecessary — because laws haven't been changed. Police are still not being charged. The LGBTQIA community is STILL under constant threat, as we saw with Orlando. I think the grief serves as a reminder of our complacency and comfortableness. Not to say that we are ok with what's happening, but are we doing all we can and should? I know I'm not. She is begging us to stay woke. Just my opinion.

Friend: Oh my gods, so it was a deliberate choice by Jenji & writers to say, "Your favorite character died? I'm sorry, we all are. People are dying in real life. Pay attention" ???

Me: That's what I think. I could be very wrong, but in my gut, as a writer, that's what I feel.

And honestly, I can't say I wouldn't have done the same thing. There's a reason I scour the internet for some of the most brutal pictures I can find of the civil rights movement atrocities. We need to realize that those things didn't happen so long ago. We're not that far removed from them, and if we're not careful, it can and will happen again.

Do you want a repeat of the past? Does seeing this piss you off? Good. Now let's see how we can work together to make sure it never happens again.

And then our conversation ended. Two things I’d like to point out.

1: This is how you have a respectful dialogue about *really* sensitive topics.

2: Just after this conversation ended, I read this interview with Samira Wiley (the actress who portrays Poussey), and realized that my thoughts were spot on.

Listen, folks. I get it. I get it as much as you get it. This shit is hard. It’s about as easy to digest as a box of acid covered nails. It cuts us to the deepest part of our core.

But you know what? IT’S SUPPOSED TO. The moment we stop seeing the reality of the day in our entertainment of the hour is the moment we stop earnestly fighting to change this world we live in. We’ll trade Goddess Diamond’s death for Justin Bieber’s new tattoo. We’ll opt out of the trial for the murderer of Laquan Mcdonald to tune in to the latest episode of Two Broke Girls.

The revolution will be televised. The question is: Will you tune in?

If you like this article, please share it! Your clicks keep us alive!
Tags
Orange Is the New Black
OITNB
Netflix
trauma 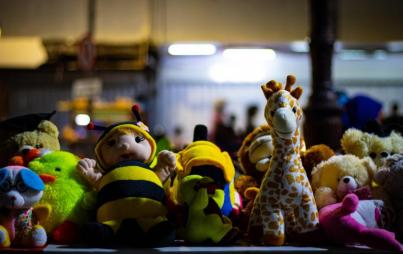