Running, In Style: The Endless Quest For A Not-Ugly Running Shoe 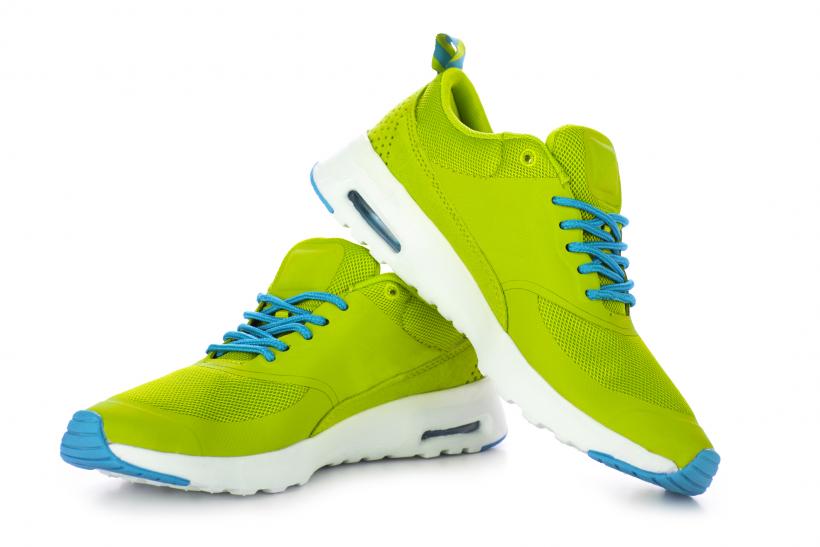 My tendonitis has healed, but I can't risk it recurring just because I want people to like the way I look as I whiz — or amble — by.

“Do you have anything a little less…” I rummaged in my mind for a polite word to tell the running store salesman, but none came to mind as I looked at the clunky turquoise running shoe. “...less ugly?”

My glance fell on a sleek apricot number, the white stripes on its side reminding me of a pastel tiger. “How about those?” I pointed.

“Those aren’t really running shoes,” he explained, much to my chagrin.

“But aren’t all the shoes here running shoes?” I inquired. After all, that’s why I went there instead of, say, a department store or a regular shoe store. I’d dutifully walked and run on their treadmill so he could video and analyze my gait — how the foot strikes the ground — and could decide exactly which sneakers matched my running needs.

“They’re not running shoes for you,” he explained. “Your arches are weak and you pronate,” he went on, using the sport's jargon for someone who puts their weight on the inside edge of her feet.

I dropped the apricot sneaker but couldn’t get it out of my mind. Next to the gargantuan boat in front of me, it was like Cinderella compared to her ugly stepsisters. They were not going to get picked for the ball.

“How about this one?” I said with a tiny flicker of hope, picking up a lightweight futuristic shoe that had holes in the sole to evoke flight. Whoosh.

“Those are more like, ‘race day’ shoes,” the salesman said to me. Since I hadn’t raced in years — I’d injured myself in a half marathon, and only now, five years later, was I returning to the sport — I wasn’t familiar with the term.

“Shoes you only wear for that one day,” he told me. I think it was his polite way of saying again, Not for you.

I wish that function and style didn’t have to be mutually exclusive for sport, too. I suppose that’s why I’m making such a scene in the running store. There are a dozen open boxes piled up around me, discarded yellow and red glowing sneakers littering the floor like a broken traffic light.

Suddenly, I saw the store in a stark black and white: Everything lovely, hipster and cool was for someone else — a professional? A young damsel who hadn’t yet ruined her feet with years of wear and tear?

And everything orthopedic, bulky and blaring was for someone like me: someone perhaps going to marathon one day again (half is more likely), but never, ever going to win.

Why did I care? Why did it matter what shoes I wore? For gods sake, they were just for jogging.

Look, I am not one of those women who shove their gams into five-inch heels to teeter down the sidewalk from their latest charity event/bar hop/date night. My marathon injury has forced me to wear heels that are like me: small. Kittenish or wedgelike. I judge my shoes by how many hours I can survive in them. (Does every woman do this?)

The older I get, the more interested I am in comfort. I don’t want to have blisters every spring to break in my new purchases. These boots gotta be made for walkin’. I actually quarantine my new footwear so I can try it out on my wood floors. (Yes, I’m onto you, shoe stores, with your plush, cushioned carpeting, duping me into thinking this is what it will feel like outside!)

Thankfully, when it comes to daily footwear, there are enough retailers out there who can provide fashionable shoes that don’t kill you (although the price might).

I wish that function and style didn’t have to be mutually exclusive for sport, too. I suppose that’s why I’m making such a scene in the running store. There are a dozen open boxes piled up around me, discarded yellow and red glowing sneakers littering the floor like a broken traffic light. (Do novice runners need glaring colors because we’re more likely to stop traffic?)

Can’t I have something pretty? Or at least unobtrusive?

It reminded me of when I was in high school for my first ski trip. My mom, raised by her immigrant parents, had never tried the sport. So she sent me off to the mountains in a ragtag of whatever was in the hall closet: a puffy green coat, a pom-pom brown hat and blue gloves that coincidentally matched each other. Would that I was one of those beautiful bunnies on the slopes in their one-piece snowsuits, slaloming down the mountains, their knees never separating more than an inch. (Although who knows what went on after hours…)

In the eighties, I finally did get my own snowsuit — a neon pink one-piece with neon green and yellow stars — and maybe it was the fact that you couldn’t miss me from a helicopter in the sky that made my skiing more confident and secure. I was dressed for the part.

And I wanted to be dressed for the part as a runner, too. Not easily identified by soles so cushioned they could survive a flood.

Yet wasn’t that what had done me in in the first place? I was constantly buying sneakers that looked good, but didn’t do me any good on long-distance runs.

My tendonitis was healed, but I couldn’t risk it recurring just because I wanted people to like the way I looked as I whizzed — or ambled — by.

Real athletes wear ridiculous things — compression socks, speedos, headbands — to improve their performance. I would have to, too.

“I’ll take those,” I said to the salesman, pointing at the first pair he’d shown me, him somehow knowing what was best for me before I knew myself.

“But,” I added sheepishly, “do you have them in a different color?”

If you like this article, please share it! Your clicks keep us alive!
Tags
running shoe
Fashion
shoes
health
feeling pretty
looking good while exercising

Only The Lonely Are Only: Should We Have A Second Child?
Amy Klein

Running, In Style: The Endless Quest For A Not-Ugly Running Shoe
Amy Klein

Fade To Black: What A Move To New York Did To My Closet
Amy Klein