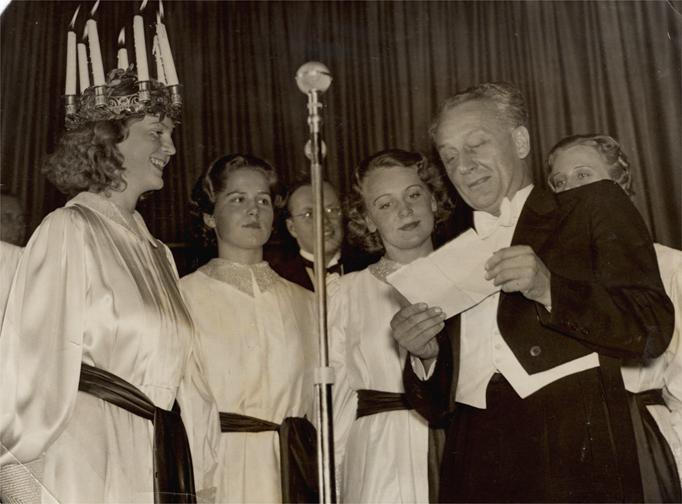 As a child, I was entranced by Saint Lucia, the heroine of the December 13th holiday primarily celebrated in Scandinavian countries. The image of her clad in a white robe and red sash, candle wreath atop her head, left me breathless. I wanted to be her, the bringer of a holiday, the bearer of breakfast in wee-hour candlelit processions.

She was more than the symbol of a holiday — Saint Lucia was a path to protagonism, one not frequently offered to girls.

In the Catholic tradition, Saint Lucia or Lucy of Syracuse has a similar story to other female martyrs of the period. Accounts of her life are murky and conflicting, but they share common themes: she chose her Christian beliefs over an impending engagement, endured torture, was denounced as a witch, and murdered in 304. Some accounts describe her with arms laden with food for the poor and candles affixed to her head for lighting so she could carry as much as possible into the catacombs, where Christians would hide out.

Believed to protect us from blindness, spiritual and otherwise, Lucy is often described in hagiography with her eyes on a plate. The red sash — worn in Saint Lucia celebrations, which began their current iteration in 18th century in Sweden — represents Christ’s blood. The wreath holding candles on her head is reminiscent of Advent.

Like many Christian traditions, Saint Lucia’s Day has pagan roots. In the Julian calendar, the winter solstice was celebrated on December 13th, then believed to be the longest night of the year. The Yule period was presumed to be rife with danger. Particularly in northern Europe, people believed the long stretches of darkness and cold left households vulnerable to witches.

Two figures commonly cited as the inspiration for the contemporary Lucy are Lucia (in the Swedish tradition, Adam’s first wife (akin to Lilith), who abandoned Adam to practice witchcraft, and Lussi, a female demon or witch accompanied by an entourage of gnomes and spirits called Lussiferda. Lucia’s mission of “shedding light” — a Christian redemption metaphor — has led some to speculate a connection between the archetype of girl-as-light-bringer and Juno Lucina, a Roman birth goddess who brought beings from the necessary darkness of the womb into harsher, more earthly lighting.

These competing narratives are reflected in Lucia’s name: both lux (light) and Lucifer. On Lussi’s night, or Lussinatta, families stayed inside while spirits and witches consorted, night riding above them in the wintry air and threatening anyone who dared cross them. The history of the Lussinatta, or Lucy Night, has been literally whitewashed, with young girls in Sweden and Norway brandishing baked goods and clad in white on what was known as (and is still) one of the most potent magical nights of the year.

On Lussinatta, families prayed together to ward off spirits but nevertheless took advantage of the shift in the air. Buoyed by Lussi's power, young women carved crosses into the green bark of willow trees to later peel them away on New Year's Day and read what the year would hold. The saffron buns (Lussekatt) that are often served by wreath-bedecked young girls to their families alongside mulled wine and coffee were originally called Devil’s Cats, meant to ward off witches and demons. If chased by a ne’er-do-well, the story went, you could appease them by throwing a sweet bun over your shoulder.

The figure of Lussi conjures familiar stereotypes about feminine archetypes and cultural anxieties about womanhood.

Her “winter goddess” aesthetic evokes notions of frigidity and the vast darkness of the wintry Nordic landscape. Sometimes called “Lussi Hag,” she was associated with older women and childlessness, while Lucia is, by definition, youthful. Her entourage of Lussiferda was a threat, too, as it denoted female power and leadership. Moreover, she was associated at once with forms of pleasure — all-night parties which protected revelers from her wrath as long as they stayed awake — and domestic labor. Part of Lussi’s spiritual task was to encourage people to finish their required chores before the approaching leisure period.

Through the constellation of images, archetypes, and figures associated with Saint Lucia’s Day, the common theme of the struggle between light and darkness emerges. In Judeo-Christian traditions, this often means redemption or the possibility of its approach. In pagan and Wiccan practices, though, light and dark often intermingle. Rather than enemies at the opposites of a binary, they produce a necessary form of tension, mimicking the ebb and flow of the seasons and the cycle of birth and death.

While some Christians have tried to deny the connections between today’s Saint Lucia and her ancestors in myth and folklore, I was thrilled to discover them.

It turns out that my childhood longing to be like Lucia was not misplaced.

Feminine archetypes, particularly powerful ones, are frequently overlooked or quite literally demonized. Rather than juxtaposing dark with light, and Lussinatta with Saint Lucy’s Day, learning the history behind our favorite traditions can help us integrate seemingly disparate narratives into a much more fascinating whole.