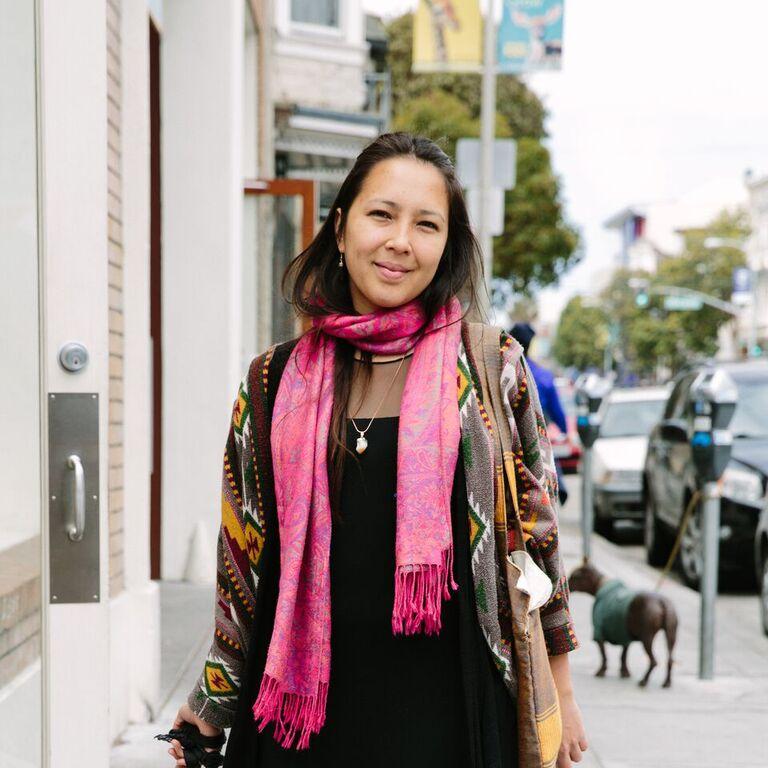 What are you up to today?
I'm on my way to get some Shasta water from my girlfriend. She's going to lend me that for making some floral essences. We were looking for the purest water and my friend was like, "Oh, I have Shasta water!"

Are the essences just for you personally?
The first one is probably going to be for me, yeah. And then I'll start sharing with my friends.

What are the essences used for? Are they like perfume?
It's collecting more of the essence, the blueprint of the flowers. It's vibrational medicine.

How did you become interested in that?
It just came my way. I went to a conference — it was called The Symposium of the Sacred in Nevada City. There were a lot of women talking about essential oils, and then this amazing woman came and she's an elder — a Hopi elder, and she learned to do floral essences in Hawaii and around Nevada City, so now she's sharing that with a group of
women — actually there's a guy too in the group.

How do most people use these floral essences?
They're usually prescribed. I'm in the first stages of my learning — it's the beginning of my apprenticeship, but our teacher will have a one-on-one healing session. She'll talk with me [and] assess what I probably need; she knows most of the flowers, but she works also with spirits, so she's also going to get a lot of information from that level, and then come up with a formula, using flowers.

So have you always been interested in herbal medicine in general?
Yeah, I've always wanted to study horticulture or herbology. I put out that thought, and, later, it showed up in my path.

Is that your current occupation?
I do that, I'm a server, and I also teach yoga.

So what are your favorite things to do at the moment?
I've just started leading a women's empowerment circle and that's been really cool. I've seen many of my friends (and friends of friends) desire for that sisterhood thing—sharing, singing, crafting, and doing stuff together. That's been amazing.

What drew you to the idea of the women's circle?
Studying more about native and indigenous cultures and understanding that there were a lot of rituals where women would gather around certain themes, probably also from the Wiccan era, I don't know — a whole mix of cultures, I would say. I myself am a mix of cultures. 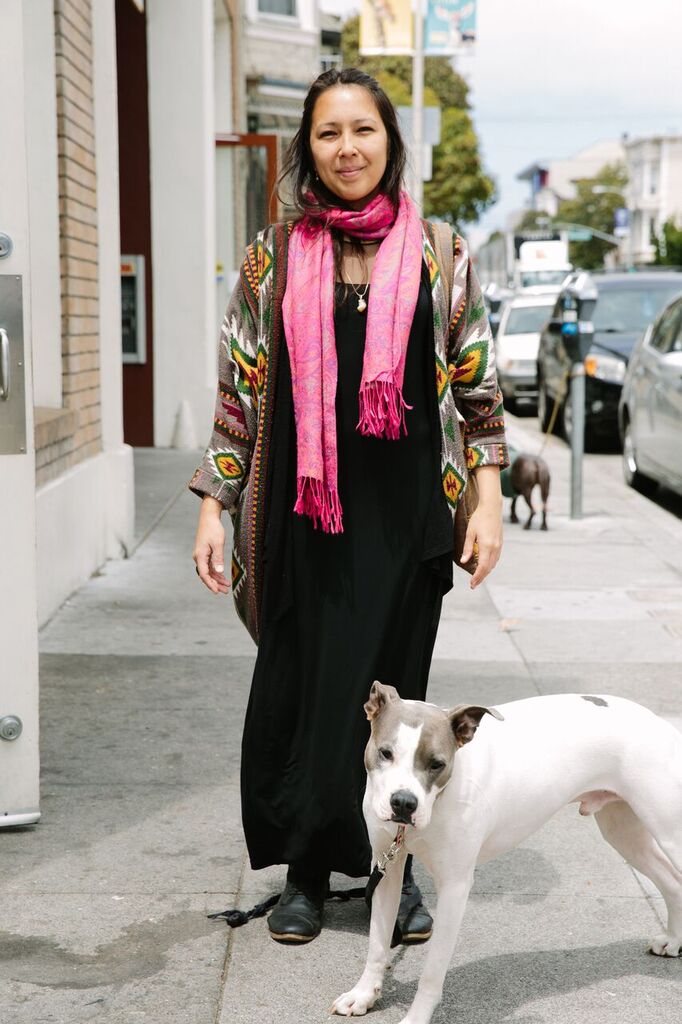 Where are some of your favorite places to go in San Francisco?
I love going to Arizmendi — I love the vibe — Strawberry Hill, Ocean Beach, and Bernal Heights.

Any challenges you've overcome recently?
Moving back to the city after living in the woods for a year and a half. So, [I am] re-enjoying things about the city, and [feeling] grateful for the abundance of work, communities, classes — we have access to so much knowledge. It's amazing. All the esoteric stuff is really going on.

What do you mean when you say you were living in the woods?
I was living on a permaculture farm. I [needed] to reconnect with the land, and wanted to know how to grow my own veggies without relying on the industries; I think that's the future. The future, for me, is learning to be sustainable and not depend on the system.

Where did you end up living?
That was in the Sierras, near Tahoe. There's a huge community — it's really happening out there. People are being more and more autonomous, and trying to find ways to live again in communities. It takes a whole skill set. Everybody brings their skills, strengths, and knowledge to the table. A lot of people have savings — you know, go in the system, save money, invest it, and gotta think long-term. I think solar panels are important, gathering seeds.

What was the biggest thing you took away from that experience?
Being by myself in the middle of nature, and not being afraid. It's the mind that creates all the fears; nature is really abundant and kind; there's no huge huge monster that's going to come out from behind a tree! [Laughs]

So you were sometimes out there on your own?
I was with a small community. There were a lot of times that I would be by myself; I was ok with it. I wasn't trying to do what I used to do in the city — which was constantly filling voids and getting stimulated to feel alive. So, [I was] just appreciating simple things. We didn't have electricity, we would save the solar panel energy for the daytime. So at night we would use candles. It was really nice — going to bed with the sunlight, maybe a little later than that, but being in tune. I'm not saying the cities are dysfunctional, I think it's an interesting lifestyle and it works for some. I mean, I like to stay up late too, and I'm grateful for electricity! [Laughs]

What inspires your style?
For most of my life — I'm in my early 30s — I was not very feminine! I'm trying to wear more dresses and colors, and get out of the gray/black/navy uniform of the West that we collectively do. And, I mean, San Francisco is a colorful town. I'm sure there's a whole revival of the tribal style and I like it. I like the patterns. Hopefully, I'll have more money one day and I'll be able to travel and get nice cotton handmade stuff, but right now what I'm affording is usually probably made in China. This bag is from India — it came from my cousin, the scarf was bought on the street, and this poncho comes from Ambiance — it's a store down 24th street.

That crystal necklace is beautiful.
It's a citrine crystal — that's for the power chakra — to sustain my power in the city.

And your dog has been really good this whole time — so cute!
This is my friend's dog — his name is Rodeo and he's amazing.