Take The Cake: I'm Not Ashamed Of Being Defensive 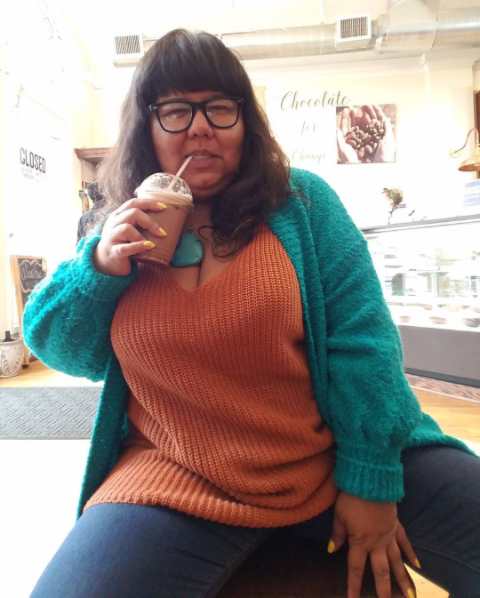 "It is not necessarily pleasant to be defensive, but that's okay with me. My defensiveness was a strategic decision, well-earned."

I was driving myself and BFF Kori to the airport at 6 a.m. last week, and — as always — asking her existential questions that no one should be asking anyone that early. But that's what I am like. You could wake me up in the middle of the night from the depths of REM, ask me my opinion on misogyny/racism/LIFE and get a solid answer (with citations). Kori has learned how to deal with this tick.

I am watching the sun rise out of the corner of my eye to my left when I ask, "Do you ever feel alienated by the knowledge that you know what to expect from most people?"

Like, recently at a corporate-style meeting, I found myself retreating to the quiet comfort of the nearest sofa and working on my computer. There was a part of me that genuinely wanted to talk and connect with others, and it hurt to feel that sense of missed opportunity of connection. However, I also have a wealth of experience that has taught me that corporate environments are emotional minefields, and that most of the people in attendance wouldn't be here (i.e., in corporate life) if they weren't good at being homogeneous. The drive toward homogeneity feels very connected to all the things that make my life more difficult than it has to be.

Before I walk into pretty much any public space or corporate environment in San Francisco, I already know that I am going to be one of perhaps two fat people (often I am the only fat person). I already know that I will have to spend, like, three times longer listening to dudes talk than women. I already know someone is going to say something weird about “diversity” and it’s going to make me grit my teeth and start nervously staring at my phone and possibly vaguebooking. I already know what most people in that room presume about me based on my body size (if they don't delete me from the landscape from the start because I’m their idea of unhealthy). And, before I enter almost any space, I am already deeply bored by all of it.

The alternative is — I guess — hopefulness? Curiosity? Willful ignorance? Naivety?

All four of these options seem like a lot of work, and shouldn't the other people in the room shoulder some of the burden of this effort? It feels to me that when you're a marginalized person, you must constantly do the work of humanizing yourself. The task never seems to end. The work starts over each time I am in a new place with new people. And what does humanity even mean in these contexts?

I was perpetually both the literally and the metaphorically "bigger" person. It honestly didn’t feel like a choice. I was trained to understand that people were going to think less of me and that it was my job to “fix” that. And then slowly, steadily, I stopped.

Because if you wouldn’t invite me out to drinks with your friends, ask me to be the maid of honor at your wedding, or date me, then you don’t think I’m fully human, no matter how nice you think my earrings are.

Maybe I am articulate enough to show that, yes, there are smart fat people.

Maybe I am bubbly enough to show that, yes, there are deeply endearing (maybe even happy!) fat people.

Maybe I am witty enough to show that, yes, there are charming fat people.

But after my little show, it sometimes feels like others get to feel more humane for having met someone who defied their bigoted notion of a fat person, and I get to feel depleted.

I was a genuinely nice person for a long time — turned the other cheek, laughed at the jokes made at my expense, and I was perpetually both the literally and the metaphorically "bigger" person. It honestly didn’t feel like a choice. I was trained to understand that people were going to think less of me and that it was my job to “fix” that.

And then slowly, steadily, I stopped.

I stopped entering the silent contract of my second-class status with others.

As I became painfully aware of how fatphobia had long affected people's attitudes and behaviors toward me, it became easier to recognize that their bigotry was not my fault. And as my shame evaporated, so too did my willingness to pretend.

What has developed in its wake is a defensiveness that, I'll admit, I am proud of. It is not necessarily pleasant to be defensive, but that's okay with me. My defensiveness was a strategic decision, well-earned.

The choice between practicing sweetness in the face of bigotry and practicing defensiveness feels like the space between a rock and a hard place. I am like a permanent resident of that space. It is work to be defensive, but I prefer the labor of being a bitch to the labor of being sweet-as-pie. There is power, for me, in refusing to play along and to creating static. I think also: there is power in being the one who preemptively rejects.

Truthfully, I really want to be able to walk into every new interaction with the hope — the expectation — that everyone knows how to treat everyone else with full humanity. But the culture’s gonna have to do a lot better before I emotionally disarm.

Until then, it’s probably a good idea to expect pursed lips and side eye from me.

If you like this article, please share it! Your clicks keep us alive!
Tags
take the cake
fatphobia
fat positive
Virgie Tovar
being defensive
self-respect
Body Positive