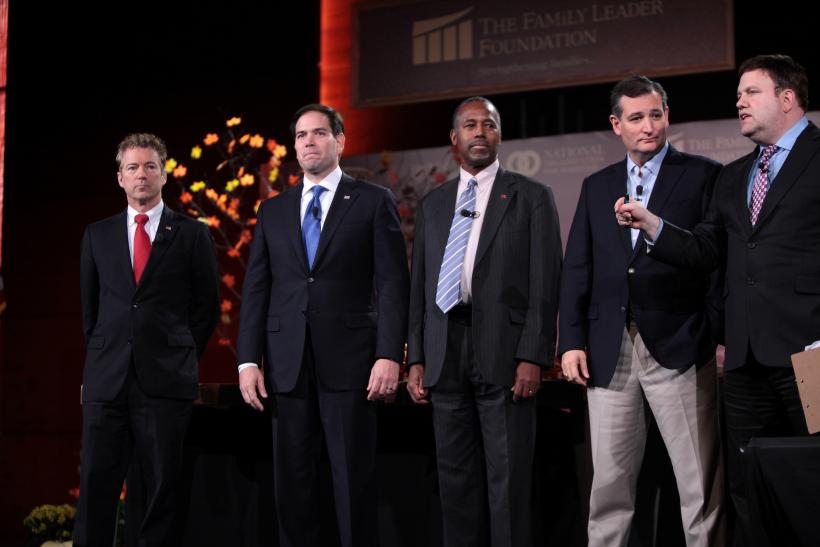 Republican backers of Trump need to decide now when and how they would act to preserve our democracy against an erratic and dangerous executive. (Image Credit: Flickr/Gage Skidmore)

There are some questions Trump supporters need to ask themselves now, or forever discard their claim on autonomous free thinking: is there a line, where is the line, and what will you do if he finally crosses it?

It’s actually much more important for those who are ostensibly on the Trump Train to have an answer to these inquiries.

Those of us who have been against Trump from the start feel fully convinced he crossed the line years ago. In fact, decades ago. When he does his White House mess making, we’re creeping towards a place where shock is no longer on the option table.

For it seems there is nothing truly off-limits to this man. He apparently “doesn’t give a crap who he fires.” Call me heartless, but I’m assuming that extends even to his own children. He’s inculcated an extraordinary kind of loyalty from his eldest three kids, but one wonders if that doesn’t rest on the explicit promise of otherwise being kicked forever off the financial goods portfolio…

Either way, would you be surprised if Ivanka were suddenly escorted from the White House grounds, flanked by Secret Service agents, carrying the sad cardboard box of office knick-knacks, signature memento of the recently-terminated?

Most of those who oppose Trump wouldn’t.

Is firing the FBI director for incoherent reasons a line? What if that FBI director is heading up an investigation into his ties with Russia? What if the next day the president hosts the Russian ambassador in the Oval Office, and invites Russian camera crews in to snap propaganda photos?

Firing his own daughter is a hypothetical example, and not an urgent one. For anyone concerned with White House ethics, the removal of Ivanka and her husband Jared Kushner would be most welcome.

I simply bring them up to demonstrate that Trump is loyal to no one but himself. It explains much, possibly all, of his actions. And those opposed to Trump have been frantically warning, marching, speaking out against this sort of quality in a president since he became the Republican nominee.

But wondering how certain elected Republicans will react to Trump further eroding our democracy is another story. I’m not talking about your Lindsey Grahams, your John McCains, your old guard of the Republican establishment who made a choice early on to fly high their flag of Trump disgust.

I’m talking about “straight-shooting” grandstanders like Ted Cruz and Rand Paul. Guys who, regardless of the tangible evidence, believe themselves to be both brilliant and brimming with presidential potential.

Is there a line Trump could cross that they wouldn’t bend their genius minds into logical pretzels in order to defend?

To be clear, this is the sort of question any person must decide up front. For all the socialists out there, I hope what’s happening in Venezuela would be a line for you – that starving children and murdered protestors would be a price too high to pay for any political ideology.

For all the die-hard libertarians, I hope the humanitarian crisis in Syria changes your isolationist outlook. I hope the death of untold numbers of children is a price too high to pay for an abstract insistence on “minding your own business."

For all of us, I hope there are certain territories where even heroes dare not tread, lest they lose our support forever.

Because it cannot be about the one woman or the one man. It has to be about what is right and legal, versus what is not.

Whatever your preferred term, it’s time to start asking this directly of those who support Trump, most especially his backers on Capitol Hill:

Is there a line? Where is the line? What will you do if he finally crosses it?

Is firing the FBI director for incoherent reasons a line? What if that FBI director is heading up an investigation into his ties with Russia? What if the next day, the president hosts the Russian ambassador in the Oval Office and invites Russian camera crews in to snap propaganda photos?

Is that a line?

Is tweeting derogatory and baseless claims, against the former president, against independent media organizations, against his political opposition — both within and without his own party, a line?

How far would he have to go? What if he tweeted about using a nuke against another country? Would that be a line?

If he did that, what would you do?

There are always impeachment papers that could be drawn up.

So I guess the real question for those still hanging on the Trump Train ride revolves around their own character.

Because as much as we mere citizens may protest, or write editorials (ahem), or donate to the ACLU, or call our representatives, we don’t have any of those options. We can’t actually hold Trump in line at all.

That responsibility falls on Congress, the courts, and most of all, the will of those who work within the system to force that system to work.

So come on Trump supporters, and tell us: where’s the line?