Why I Didn't Try To Lose Weight For My Wedding 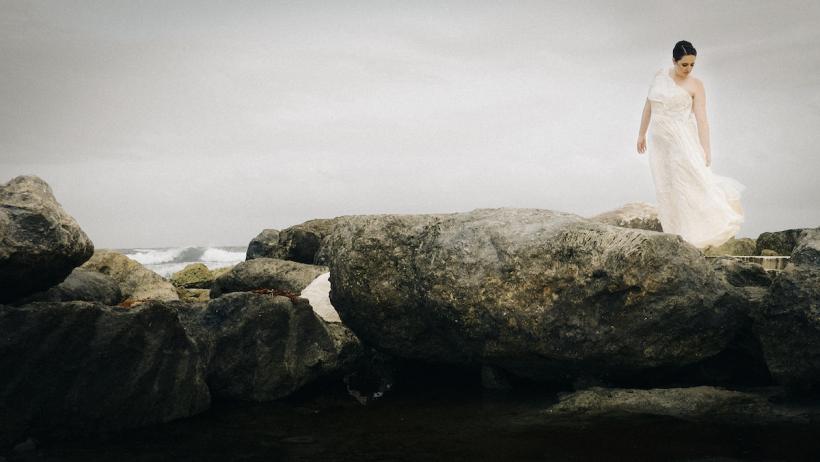 To take care of myself in the months preceding my wedding I had to make a conscious effort to not dive into dieting. Wedding weight loss was off the list of things for me to do, or to even attempt.

As soon as I begin to try to control the outcome of any situation, I become lost in an obsessive spiral.

I will never forget the night I realized that my relationship with food was not a healthy one. It was late, long past when I had meant to fall asleep. My eyes blurred as I watched, for the third time in a row, a plastic bowl of ramen spin behind the yellow tinged window of the microwave. I opened the door before the countdown finished. I wanted to throw it away, but I ate it instead. Less than an hour later, I stole a slice of chocolate cake from my roommate. I inhaled it as I walked back to my basement bedroom. Minutes later, I threw it up.

When I was 18, I went through a painful breakup. My stomach was in knots for weeks on end, I couldn’t eat without feeling sick afterwards. I didn't consciously stop eating, but I did stop eating. I could feel the anxiety in my gut and food didn’t alleviate the pain. Nightmares of eating something rotten and being unable to stop vomiting played on repeat.

I lost a lot of weight, quickly. My dramatic weight loss elicited comments from a couple of well-intentioned teachers. I sought out a therapist and worked on managing the anxiety. The nervous energy I worked on dispersing was hovering atop caverns of depression.

Feeling too deeply can split a person open. I have never known what to do with the empty space.

The open wounds attracted an abusive man. Comments about my body were just one of the transgressions that occurred during those years. He told me that if I ever gained too much weight, I would not be lovable anymore. His reasoning was, “If you became really fat, it means we aren’t compatible because being healthy is important to me.” He didn’t instill self-hatred — he reinforced what I already believed.

Body image has long been intimately associated with my idea of self-worth, even when I didn’t realize it. I hold no delusions that I’m unique in this way. The messages of good versus bad bodies are so deeply instilled that they are entangled in my struggle with depression and anxiety.

I tried to treat myself as I would treat a friend."

Despite the positive messages of love I receive from my current partner, I am often wandering in the canyons of depression. I knew that if I tried to reshape my body for my wedding, I risked becoming lost in the shadows of the towering cliffs.

When I slip into that space, I am hit immediately with a hollow feeling of homesickness that lives in my gut. I become immensely uncomfortable in my skin. If I catch myself in a mirror, I see someone who is hardly even worthy of hatred, imperfections so obvious that I am convinced they are horrifying to people who look my way.

As soon as we announced that we were getting married in Mexico, I was drenched with a plethora of unsolicited opinions about how to achieve a “better” body. I would politely chuckle and quickly change the subject when someone would try to engage me in a conversation about “fitting into the dress.”

When the feelings didn’t go away, I was concerned that my wedding day would be blanketed by overt body awareness.

Whether self-conscious or confidence, I wasn’t sure, but I thought I would be astutely aware of my body and appearance. I wanted to begin this new chapter in my body, whatever shape it is.

I tried to treat myself as I would treat a friend. If I told myself cruel things, I would forgive myself for it. If I binged, I accepted that I did it and allowed myself to experience it. If I tried on a wedding dress that stirred up waves of body hatred, I would let the current of self-critique take me. I was spending less energy on trying to stop the negative emotions. I wasted less time trying to wield my body and mind to my will.

The moments I no longer squandered on fruitless endeavors of self-will could now be spent on healing.

If someone else could love the broken parts of me, maybe I could find a way to love them, too. My wedding has come and gone and I did what I set out to do. Not a moment of that day was lost to the shadows of self-hatred. The cliff is still uncomfortably close to where I stand. When I look over the edge, my stomach turns with vertigo. I’m wobbly on my feet, but I’m learning how to not fall in.