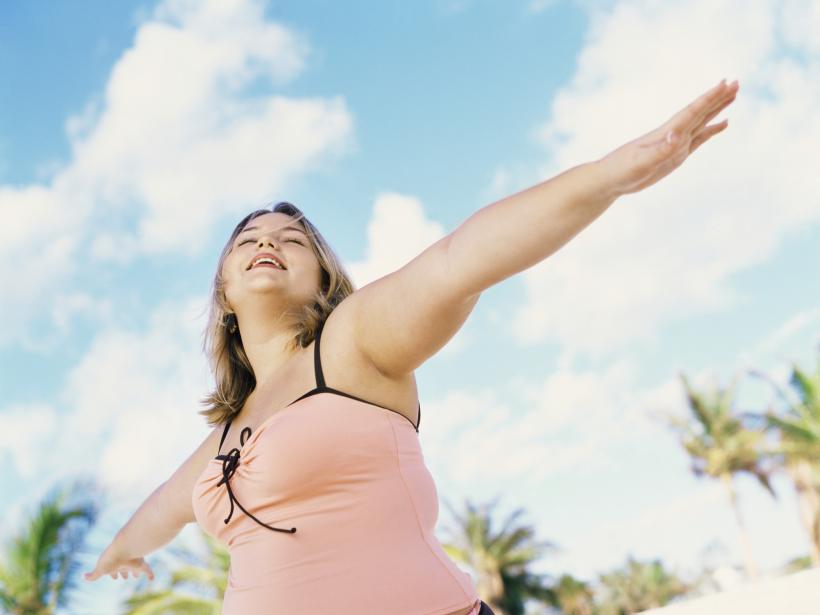 There’s a lot more information about what it’s like to be a fat woman and the things you should and shouldn’t say.

I used to spend a lot of time wondering if people were polite to my face and rude behind my back, probably because I’ve caught people doing that before.

To my face they’d tell me how cute my outfit was, then I’d turn around and they’d make a comment about how “brave” I was for wearing a skirt that short given my size, with the word ‘brave’ dripping in sarcastic derision.

There’s a lot more information out there now about what it’s like to be a fat person and the things you should and shouldn’t say, but I often find that my everyday experiences and my awareness of the things folks do and say around me come as a surprise to those who don’t have to think about it all the time.

Even my fellow body-positive folks can’t know all of it from life experience alone, and unless they’re fat they really can’t be expected to. Here’s what I wish everyone knew…

1. Being fat isn’t always as easy as ‘calories in, calories out.’

This one drives me crazy every time I hear it pop up in conversation. Someone makes a comment about how hard it is for them to lose weight, or has the audacity to talk about how they quit dieting altogether because it was stressing them out, and in comes that guy. “It’s not hard if you really want to work for it – it’s just making sure you burn more calories than you eat.” That is such an insultingly drastic oversimplification.

First of all, food affects all of our bodies in really different ways – and it’s supposed to. We all come from different genetic backgrounds, and some of those involved knowing there were going to be lean times, or cold times, or some other reason for us to need to pack on the fat in certain areas. And we (hopefully) all know that there are any number of hormone-related complications that can make losing weight by simply cutting down calories sob-worthy, even if you “really want to work for it”.

Bottom line: don’t regurgitate information you found on the internet or read in a Weight Watchers pamphlet; it’s not always as simple as that, or even as simple as what may have worked for you.

When you’re fat, you’re stuck in an endless cycle of suck and misery. People make fun of you for outfits you “can’t pull off”, for being lazy, and in some instances people even have the audacity to say fat people shouldn’t have kids. Bullied to tears, some fat folks haul themselves to the gym or wake up early to go for a jog, only to face the exact same ridicule.

I remember going for a jog one morning and having someone shout “I didn’t know whales had legs! Free Willy!” at me as I went by. I’ve been made fun of for sweating too much at the gym and for having belly rolls. So maybe instead of yelling at a fat person to get to a gym, understand that there’s literally no safe space for fat people, even if they’re trying to ‘fix’ what you perceive to be their problem.

3. Don’t expect us to be grateful for chubby chasers.

I’m sure some folks are into it, but for me the only thing worse than someone making fun of me for being fat is someone who only wants to date me because of it. Fetishizing a part of my body is basically the least sexy thing you could possibly do. If I hear another thing about how everyone should sleep with fat women because “they know what to do with their mouths” or because they have “better cushion for the pushin’” or any of those gross phrases every fat woman has heard a thousand times, I’m gonna scream.

4. We hear you when you talk about how fat you think you are.

Maybe you think we assume we’re some sort of exception to your derision, but when you pinch your arms and talk about how fat they are with an expression of disgust, I know exactly what you must think of how I look. I know it’s easy to hate ourselves, but bear in mind what you’re really saying before you open your mouth; if you think you’re disgusting and I’m sitting right there being about twice as fat as you, I know you think I’m disgusting too. And if you don’t, maybe it’s worth considering it’s not your body fat that’s causing you to feel poorly about yourself.

And those are two different things. The fat-acceptance movement is a lot like the pro-choice movement: we believe you have the right to make whatever choices you feel are best for you and your body. There are plenty of pro-choice advocates who wouldn’t feel comfortable having an abortion, yet magically this doesn’t render them incapable of understanding other people should have the right to make that choice for themselves.

Of course it’s a lot more complicated when it comes to the diet industry. So many people feel like they have to lose weight to be attractive or acceptable, and that breaks my heart. But if you just wanna get your body to a point where you can go hiking with your buddies or any number of other perfectly valid reasons to lose weight, you do you, just make sure you do it without making other people feel crappy about their bodies. Drop those #fatass and #byegrossbody tags, please. Love yourself and what you’re doing without dragging other folks down.

“I just ate that whole slice of cheesecake. Ugh, I’m so fat.” I can’t tell you the number of times I’ve heard something like that at parties and work lunches. Listen to yourself when you use the word ‘fat’. Can you replace it with the words ‘ugly’, ‘disgusting’, ‘lazy’, etc? If so, that’s exactly what you’re calling all of your fat friends.

7. We feel a lot of pressure to be the ‘right’ kind of fat person.

As body- and fat-acceptance movements have become more broadly accepted, there’s this image out there of the ‘right’ kind of fat person; she’s fat but she does pole-dancing or ballet. She’s super athletic, goes jogging every day and has perfect health according to her annual health exams. She just happens to be fat. More power to these kinds of fat folks, but frankly the rest of us aren’t obligated to live up to her health standards. Just like any other random stranger on the street, I’m not obligated to justify my right to exist in public to you by way of a doctor’s note. If it’s not something you’d demand of someone you’d perceive as being of an ‘average’ size, it shouldn’t be something you demand of someone you think of as fat — it is exactly zero per cent of your business.

GIFS via giphy.com and tumblr.com.