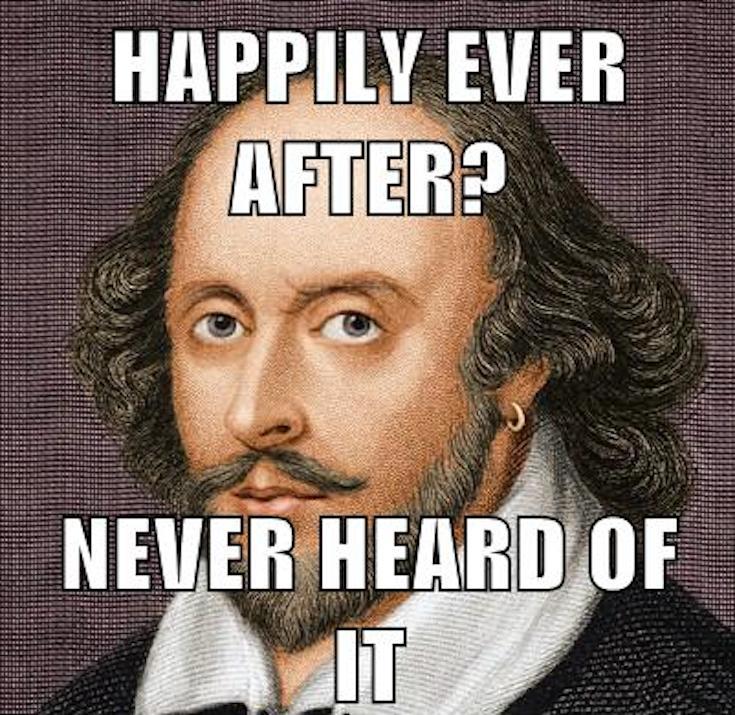 Today marks both the (modern) birthday and death date of famed poet and playwright, William Shakespeare. (Worst. Birthday. Ever.) You probably already know that Shakespeare lived from 1564 to 1616, wrote a gazillion sonnets, penned another gazillion plays, and loved himself a lace collar.

But what if we told you that some of his love sonnets were written about men? Or that he married an older woman who got pregnant before their wedding? Or that his tombstone had a curse etched on it?

Or that some of his plays are really, really messed up?

Behold: Shakespeare at his most insane.

In case you aren't familiar with the play The Taming of the Shrew, allow me to familiarize you with the plot: 10 Things I Hate About You was based on it. Substitute "date" with "marry" and the two tales are pretty close. Kate—the "shrew" character, who goes by "Kat" in the modern adaptation—is, admittedly, pretty angry and obnoxious throughout most of the play. To make a convoluted story short, an elaborate scheme forces Kate to marry Petruchio, and after he shows up to their wedding wickedly drunk, he begins to tame her.

Sorry, did I say "tame?" I meant "brutally abuse." Petruchio starves Kate, acts like a loon, and tries to make Kate think she's the crazy one. (Have you dated this man? I think I have . . . ) Sadly, it works!

2. Homoeroticism Leads To A Twisted Murder Plot In Coriolanus

Unlike the "maybe I like him as more than a friend" vibes evident in Merchant of Venice, the war play Coriolanus goes straight for the obvious. The plot is roughly based on the life of real Roman leader Caius Marcius Coriolanus, who led troops during various uprisings against Rome. One of these bloody squabbles involved a man named Aufidius, a general from an opposing army. After trying to kill each other for the majority of the play, Coriolanus seeks the help of Aufidius in order to exact revenge. Remember: These guys are enemies.

Coriolanus shows up to Aufidius' place, and opts for the "scarcely clothed" look. Coriolanus reveals his identity, and Aufidius is reduced to a preteen girl at a One Direction concert. Here are some choice quotes from his speech (Act IV, Scene V):

"Let me twine
Mine arms about that body, where against
My grained ash an hundred times hath broke
And scarr'd the moon with splinters"

Okay, so the enemies are reconciling?

"Know thou first,
I loved the maid I married; never man
Sigh'd truer breath; but that I see thee here,
Thou noble thing! more dances my rapt heart
Than when I first my wedded mistress saw
Bestride my threshold."

Did you catch that? Aufidius just said that he is more attracted to Coriolanus in this moment than to his wife on their wedding day. Wait! There's more.

Wet dreams: even war heroes get them! Coriolanus then betrays Aufidius and is later killed in a plot masterminded by Aufidius. Hey, loves makes us do crazy things.

Allow us to walk you through the main horrific events. The majority of the plot revolves around things getting out of hand after a bunch of people bicker over the next emperor of Rome. During this bickering, Tamora, Queen of the Goths, decides to seek revenge on Titus Andronicus.

But rather than publicly humiliating him like decent people do, she sends her sons to rape Titus' daughter, Lavinia, then cut her tongue and hands so she cannot communicate. (Eventually, Lavinia places a stick in her mouth and writes the names of her attackers in the dirt.) That just won't fly for Titus, so he decides to murder the brothers to seek vengeance for Lavinia. Titus captures and binds the men.

After giving Lavinia the grand honor of holding the basin to collect the blood of her attackers, Titus explains to them:

"You know your mother means to feast with me . . .
Hark, villains! I will grind your bones to dust
And with your blood and it I'll make a paste,
And of the paste a coffin I will rear
And make two pasties of your shameful heads"

And, by golly, he does just that. Titus gathers the brood to his place for a dinner. With Lavinina's wishes, he kills her to put her out of her misery. Like, at the dinner table. Awkward. Next, Titus waits until Tamora starts eating her meal. Once she does, he reveals the secret ingredient:

"Why, there they are both, baked in that pie;
Whereof their mother daintily hath fed,
Eating the flesh that she herself hath bred."

Titus then kills Tamora, before he can relish her look of horror. Another character kills Titus. In the middle of all of this, Tamora has a half-Middle Eastern baby with her secret lover Aaron.

Shakespeare would've made for one hell of a soap opera writer, no?

If you like this article, please share it! Your clicks keep us alive!
Tags
Shakespeare
William
Birthday
author
playwright
sonnet
poet
shall I compare thee to a summer's day
thou
Titus Andronicus
Merchant of Venice
Coriolanus
Taming of the Shrew
10 Things I Hate About You
Kat
kate
Petruchio
Lavinia
Tamora
Rape
murder
mutilation
cannibal
sons
mother
Aaron the Moor