The Question That Can Spark A Fashion Revolution: Who Made My Clothes? 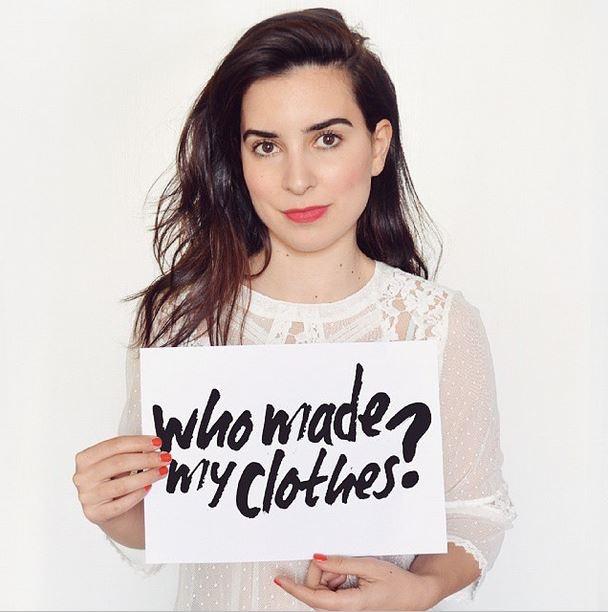 Two years ago today, the Rana Plaza building in Dhaka, Bangladesh, collapsed, killing 1,129 people and injuring over 2,500 more. Most of the people killed or hurt in the collapse were women who worked at the garment factories housed within, churning out cheap clothing for stores like Mango and Wal-Mart. The day before, massive cracks had appeared in the floors and ceilings of the building, and workers expressed concern for their safety. Management threatened to fire anyone who didn't return to work, so nearly every employee was present when the structure collapsed the next morning. Some survivors were trapped in the rubble for over a week before rescuers could extract them.

This unspeakable tragedy was a direct result of the fast fashion industry—and our unending appetite for cheaply made, quickly produced clothes.

Wearing your clothes inside-out might seem like an odd way to honor those lives lost and enact change in the fashion industry, but it's the symbolic statement behind Fashion Revolution Day. And it's proving to be a powerful one. This year, people from 71 countries are taking part, and fashion companies are being forced to take notice.

The founders of Fashion Revolution Day declared that every year on the anniversary of the Rana Plaza collapse, people wear their clothing inside-out and ask clothing companies, "Hey, who made my clothes?" As consumers, this shows that we care about the people who made our clothing and the working conditions they were made in. It encourages companies to be more transparent with their labor practices. And perhaps most importantly, it raises awareness and starts conversations. It's nearly impossible to be a "perfect consumer" in this globalized world we live in, but being more mindful of where and how your clothing was made, and perhaps most importantly, who made it, is a huge step forward.

To take part in Fashion Revolution Day, turn your clothes inside-out, post a photo on social media, tag the clothing brand, and ask them, "Who made my clothes?" You can also email or call the clothing company directly. You'd be surprised at how many brands are actively responding and participating. And if a brand is unwilling or unable to divulge that information, well, maybe think twice about buying from them again.

Even if you'd rather not participate in the whole inside-out clothes thing, please take a moment today to honor the victims of Rana Plaza, and vow to do your part, even in small ways, to not let it happen again.

If you like this article, please share it! Your clicks keep us alive!
Tags
fashion revolution day
who made my clothes
rana plaza