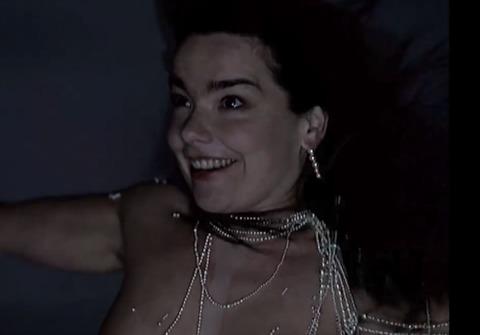 Today, on #ThrowbackThursday, we're wondering how Björk's ultra-tantalizing "Pagan Poetry" music video of the distant past (i.e. 2001) stacks up against the raunchy zest of today's skimpy vids. Whether or not you've heard about Miley Cyrus' tongue lawsuit, you probably know this pint-sized pop princess has raised hell with her sledgehammer-licking "Wrecking Ball" video. And Beyonce, in addition to being blamed for babies born out of wedlock (um...ok), is also causing shock waves with her salacious "Partition" video...to name just a couple examples of modern-day videos that have promoted tongue-wagging.

Recently, we asked how Fiona Apple's "Criminal" video, once considered uber-controversial, stacked up against today's more lurid affairs. Our verdict? It was stupidly sexy, but disappointingly tame by today's standards. So how does Bjork's video hold up in the battle of the video raunch?

Well, for starters, it's a whole lot classier than someone getting butt-naked and grinding on a metal construction ball of destruction (but then...what isn't?). The video opens with vague blobs dancing about, interspersed with intimate images of Björk. It looks like she's enjoying herself, to say the least, and there are abstract sexualized images like ejaculation—but the whole thing is more artistic then vulgar. It then progresses to Björk writhing about with a colony of jewelry on her body. Briefly, she's topless—but sorry creepers, the shot is quick and blurry. Oh, and here comes the gross part: it documents a gnarly corset piercing.

All of which caused this video to be banned in the US.

Yet while the piercing aspect is enough to make the bravest person shudder, the video still isn't anything that would cause pandemonium today. Perhaps it's the intimacy of it all that makes some feel uneasy? Or the abstract blobs? Check it out for yourself and see what you think.