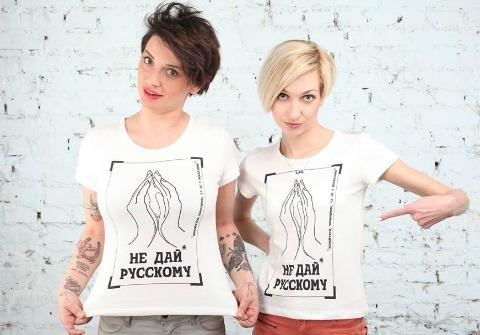 Alright, we all know that sh*t is going down between Russia and Crimea, right? Ukraine (and the rest of the world for that matter) is fairly pissed off and have taken to boycott Russian goodies.

Yes, goodies. New grassroots movement, "Don't Give it to a Russian" encourages women to stop banging Russians. It's a modern day Lysistrata! There's even a Facebook page with over a 1,000 fans dedicated to the cause and—of course!— a bevy of trusty t-shirts to support the cause along with angry Russian opponents. There has even been talk of paying sex-workers to abstain from rendezvous with Russian clients. Got to give it the Ukraine women for opting to go sex-less for political improvements. I want to like this movement, but I'm wickedly bothered by it.

Sex strikes aren't exactly new. It happens in Greek mythology and just last fall, Colombian women pulled an anti-booty campaign in hopes of getting their roads repaved. Do they work? Yeah, but what kind of message is that sending about sexuality?

"Women, who throughout history have found themselves at a disadvantage with men holding most of the power, have long known that men have a special vulnerability when it comes to sex." — Frida Ghitis

Let's remember something: just because it works, doesn't mean it's good. Let's say you tell your boo that your vag is going to be a nookie-free zone until s/he stops fighting with your best friend. Chances are, the two will be thick as thieves quickly after that—but what are the long term affects of your relationship? All you did was punish your partner. You sent a message that manipulation is okay in your relationship. Now, your sweetie has the right to do the same to you. Small fires may be put out in short time, but an overall growing resentment will foster out of the ashes.

On a global scale, this doesn't make women look too good. Ghitis was correct in noting that our gender is at a disadvantage at holding power, but using our sexuality to counter said power isn't the answer. In doing so, we come across as manipulative and petty. While I appreciate the extra media attention this issue has brought to the larger scale catastrophe, I can't condone the movement itself.

I mean c'mon, if you want to make the Russia vs. Crimea disaster about sex, just make a sex tape featuring the Putin butt plug.

If you like this article, please share it! Your clicks keep us alive!
Tags
Russian
Crimea
Ukraine
Russia vs. Crimea
Don't Give it to a Russian
conflict
Sex
Relationships
sex as a weapon
Putin