LiLo, We Applaud the Bravery it took to Talk about your Miscarriage 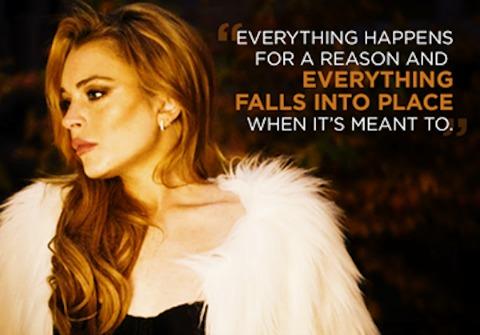 Miscarriage. We all know someone who's gone through it and it's always (relatively) hush-hush. It's not usually announced; rather, the news trickles out to family and friends over time.

"Is she drinking wine? I thought she was pregnant. Oh, didn't you hear? She lost the baby."

Women are taught from the get go that our bodies were designed to carry and produce life. Even if motherhood isn't your chosen path in life, part of the female identity is knowing we could have a baby if we wanted to. So for many women, having a miscarriage is a sign of failure—although causes are vague and often unpreventable, women tend to blame themselves.

On the season finale of Lindsay Lohan's show, Lindsay, LiLo came clean about her own miscarriage. (Let's put your probably rather-harsh opinions about her health and ability to be a parent on hold for a minute.) She was devastated. Sobbing, she uttered: "I couldn't move . . . mentally, that messes with you." Because the media feeds off stars' often humiliating descents from grace, the focus of the discussion has largely focused on the identity of the sperm donor/mysterious father.

We'd rather talk about miscarriage—the spontaneous termination of pregnancy within the first 20 weeks after a sperm/egg meeting—instead. It's far more common than you think—in fact it's estimated that 50% of pregnancies end in miscarriage—and a large chunk of this statistic applies to women who didn't even know they were pregnant. In fact, many women never realize that they've had a miscarriage because symptoms typically mimic that oft-dreaded monthly gift: there's bleeding (which progresses from light to heavy), cramps, abdominal pain and general weakness. Because of this, it's not unusual for a woman to assume she's had two periods in one month (the horrors!) and simply carry on with her life.

Researchers speculate that 10 to 25% of "clinically recognized" pregnancies (the ones consciously known about) result in miscarriage. If you think about all the families you know and how many children they produce, you'll see that's a damn big number—yet for all these people, there's little "common knowledge" on the subject. So let's get educated.

For starters, there are different types:

Blighted Ovum
This happens when a fertilized egg attaches to a wall of the uterus, but doesn't develop. Remember that factoid about women miscarrying before knowing they're pregnant? A blighted ovum is often the case for those occurrences. It's typically caused by chromosomal abnormalities.

Complete Miscarriage
When a woman's body takes care of everything and expels all tissue associated with the pregnancy.

Incomplete Miscarriage
Tissue from the placenta or fetus remains inside the woman when this occurs.

Missed Miscarriage
Also called a "silent miscarriage." When this happens, the cervix remains closed and everything stays in the uterus. It's not readily apparent that a miscarriage has occurred. Sometimes, a woman doesn't realize the baby has died for a period of weeks. Yikes!

Ectopic Miscarriage
This is a strange one. An ectopic miscarriage results from an ectopic pregnancy which is defined by a fetus attaching itself somewhere other than the walls of the uterus. Most commonly, it adheres to the fallopian tubes. It has also been found on the cervix, abdominal cavity and ovary. These pregnancies can not only cause internal bleeding, they're actually the leading cause of pregnancy-related deaths in the first trimester.

Not surprisingly, miscarriages can wreaks havoc on the brain too—women who endure a miscarriage often suffer from depression or anxiety as a result. (Even after producing a healthy child, women who have previously experienced a miscarriage are at a higher risk of postpartum depression.) Doctors refer to this psychological impact as a woman losing her "reproductive story"—it's a death that must be grieved as such. In fact, up to 20% of women have continual intense pangs of yearning for the lost baby up to six months after losing a baby.

It is a terrible thing, so why don't we talk about it more? It shouldn't take a damaged former teen star to open up the discussion. Let's say the American people were Lindsay's friend instead of the fear-mongering, train-wreck loving culture of celebrity crucifixion...what would we say to her?

Probably not, "you're a drug-addled, booze soaked circus spectacle in too-tight pants with a penchant for self-destruction." Nope.

You'd say with the utter sincerity that can only come from genuine empathy, "Lindsay, I am so. sorry. How are you feeling?

And then you'd give this clearly messed-up gal the hug of her damn life! It's not too often we can turn to celebrity as a source of a "learning moment," but dare-we-say this is a great opportunity to do so.