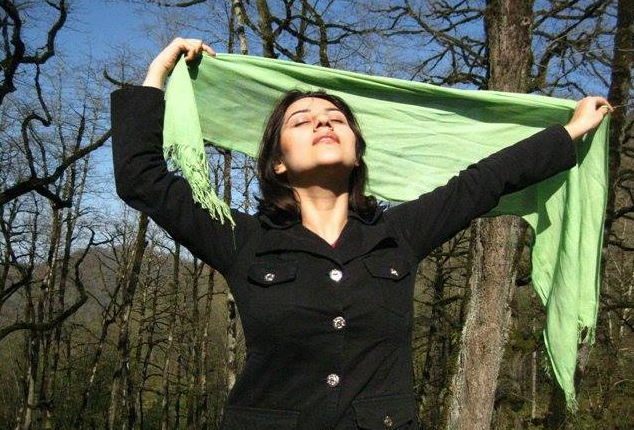 Say what you will about social media—narcisstic, self-shaming, the very necrosis of humanity—but it does provide an incredible public platform for viral, social change. The latest?

Liberal Iranian journalist Masih Lainejah has sparked a movement of "stealth freedom" for women living in Iran; Muslim law proscribes that every women dress "modestly" in loose-fitting clothes, covering their hair and often their face with a hijab or burqa. These measures are not only designed to protect women from the prying eyes of men-folk, but serve as a metaphysical entity as well: "the veil which separates man or the world from God."

There has been a bona fide blizzard of protests, columns, books, movies, plays, songs and movements rallying against this practice for decades; according to the Arab Times, the hijab has been obligatory since the 1979 revolution. (It's also seemingly ubiquitously hated as a symbol for female oppression, but we'll get to that in a minute.)

Lainejah posted a grinning picture of herself sans her veil (doubly illegal as Facebook is technically forbidden as well, though largely overlooked)—and urged other women to follow suit. My online translation tools aren't too hot, but from what I can glean, she describes the joy and weighty significance of these "stolen" moments or "freedom sneaks," where women feel the sun and wind on their face instead of the whispering weight of the scarf upon their head.

The response to Lainejah's public flouting of the law was nothing short of electric. Selfies began pouring in of women without their veils, coquettishly flying them in the wind like capes, winding them around their necks or simply skipping down the street with no veil in sight. (This collection of historic photos offers a glinting time capsule of women's fashion and bodily freedom prior to 1979 in Iran.)

Lainejah's movement has ceased to be her own; it's spawned its own page—Stealthy Freedoms of Iranian Women—(which boasts more than 80,000 likes) and its own Twitter handle, #آزادی‌یواشکی (#stealthfreedom).

But not everyone shares these sentiments; just this past Wednesday, hundreds of conservative Muslims gathered in Tehran to protest "Western-style dress" and its blatant immorality.

Immorality is so widespread in society, we have to do something before it is too late. We Muslim women do not feel safe in the public sphere. —Fatemah, 23, protestor

And before you go and mutter to yourself, "Yeah, but that's a woman who's drinking the Kool-Aid of the government and religion—it's the opiate of the masses, haven't you heard?! We have to save her from herself!"—let's head over to Afghanistan for a little more perspective.

Malina Suliman is a graffiti artist making waves in Kabul, spraying her feminist and anti-Taliban agenda across the streets—all while wearing a burqa.

Suliman makes the salient point that while some could view the Taliban's militant insistence on the burqa as a form of oppression, this is not nearly as disturbing as the socio-economic registrations put on the fairer sex, including limited access to schools, political power, the job market and heath care services. She believes the West's obsession with the burqa is not only patronizing but incredibly short-sighted; there is so much more to tackle than the burqa.

Suliman's work is haunting, depicting everything from bloody bodies and prison bars to larger-than-life women in turquoise hijabs, directly drawing her inspiration from people's problems in her community and transforming them into public street art.

Some people who face injustice and the lack of rights take the bomb to kill us or narcotics to kill themselves. Graffiti is a peaceful way of fighting against the government, against all wrong things. —Suliman

If you like this article, please share it! Your clicks keep us alive!
Tags
burqa
hijab
Iran
Afghanistan
Women's Rights
oppression
feminism