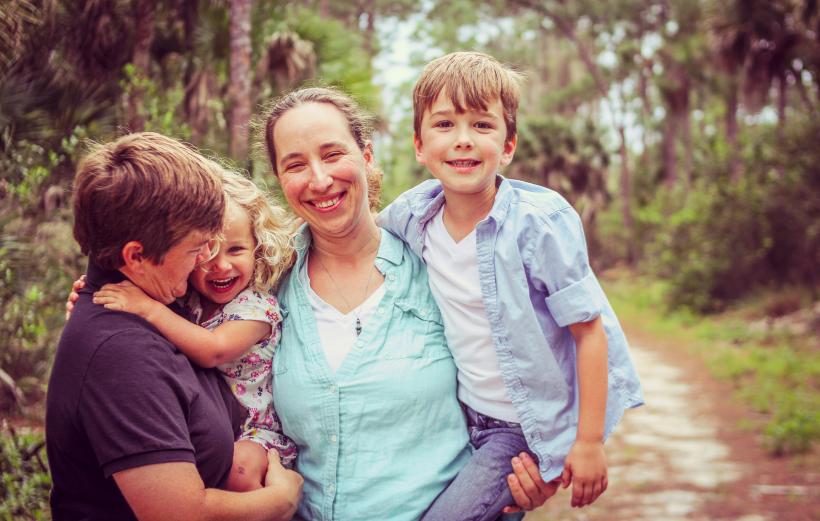 It might seem frivolous to those who feel right at home being called "mom" or "dad," but many queer parents agonize over what their children will call them.

At my partner’s choir concert, my daughter is disruptive. She wants to sing; she wants to dance; she wants to be held by her dad. The choir director is laid-back and loves it when members bring their kids to rehearsal, so I let her scamper to the front of the church, where my partner picks her up and bounces her on his hip and she grins along with “We Rise Again.”

Afterward, a woman approaches our family with a smile. “Holding your baby and your music and singing at the same time?” she asks my partner. “You are one amazing mama!”

My genderqueer spouse is the one being misgendered here, but I cringe too. The assumption grates even when it’s not aimed at me: person who gave birth equals female, which equals mother. I, therefore, am not my daughter’s mother. It reminds me of the nurse who came into our hospital room when my partner was recovering from childbirth and asked me if I had any children of my own.

“She doesn’t like to be away from her daddy,” I say. The woman, thank goodness, takes the hint. “What a great daddy you have,” she says to my daughter. I wish this happened all the time. Earlier this year, a stranger stopped us on the street to ask what I had given my partner for Mother’s Day. I understand these are people trying to demonstrate their support for what they perceive as a two-mom family, and it’s meant to be kind, but it also makes us decidedly uncomfortable.

Before I had a child, I would never have imagined how often I’d be referred to using a parental title by people who are not my kids. It still seems bizarre that perfect strangers call me “Mommy” just because they see me holding a toddler’s hand, but it happens on a regular basis.

Although people often behave as though we’re the first family they’ve ever met whose parental titles don’t match our perceived gender roles, there is a growing cadre of queer and gender-non-conforming parents trying to create a space for ourselves in the heavily gendered lexicon of parenting.

When it’s just me and my daughter — which is often, since I stay home with her — the tension between our family’s reality and other people’s perceptions is easily elided. Passersby assume that I’m her mother, and I am, so it’s all good. But when my whole family is out in public together, people tend to assume that we’re both Mommy, which both miscategorizes my partner and makes me feel weirdly territorial.

Although people often behave as though we’re the first family they’ve ever met whose parental titles don’t match our perceived gender roles, there is a growing cadre of queer and gender-non-conforming parents trying to create a space for ourselves in the heavily gendered lexicon of parenting. While it might seem frivolous to those who feel right at home in the titles socially assigned to them, many queer parents agonize over what they want their children to call them.

My friend Zoe, a femme genderqueer parent, couldn’t settle on a parental appellation that felt right for months after the birth of their first child. They finally settled on “Zaza” because it “felt sassy, femme, and queer,” but it has been difficult to convince other people in their life — even their extended family — to embrace the title. “People usually act pretty confused or rude” when Zoe corrects them, they say. “I think a lot of people don’t get it.”

Zoe’s oldest child, now four, has started to step in when people misgender their Zaza, saying “Not everyone has a mom and a dad, so you should ask.”

Even for parents who don’t mind traditionally gendered titles, the choice to be “Mommy” rather than “Mama,” or “Daddy” instead of “Papa” can be fraught with complication. When Fawn and her wife Casey adopted their children, they decided to go by “Mommy Fawn” and “Mama Casey,” but their eldest shortened Fawn’s title to “Fawnie.” “When they call me by my first name in public, people assume I’m not their mother and it makes me feel like less of a parent,” Fawn says. She defers to her children’s right to decide what they call her, “but that doesn’t stop the wanting.”

I’m a member of an online discussion group for queer parents, and a frequent topic of conversation is the difficulty of finding children’s books that don’t present a cisgender, heterosexual, two-parent family as the default. Books about family issues — dealing with divorce, loss, a new sibling, and so forth — tend to be rife with binary language, especially anything designed to teach children about sex and bodies. But it doesn’t stop there; the assumption that all children have a Mommy and a Daddy shows up everywhere from potty training to learning colors.

In a culture where other family structures are increasingly common, it’s frustrating to find so little representation for non-traditional families in the media our children consume.

Although our daughter does have a Mommy and Daddy, her parents inhabit those titles in unorthodox ways, and we are already having conversations with her about why people so often refer to her Daddy as “Mommy,” and all of the different ways families can look.

The names our children call us are imbued with a whole host of emotions about our families and our roles within them, our hopes and dreams for our children, and how we want to show up in the world.

They are often selected with great care; they are deeply personal, not one-size-fits-all.

Parents, including queer and non-binary parents, deserve to be recognized for the authentic complexity of who we are — and that includes calling us by our correct names.

If you like this article, please share it! Your clicks keep us alive!
Tags
gender
oppression
trans
Gender equality
parenting
non-binary parents
non-binary