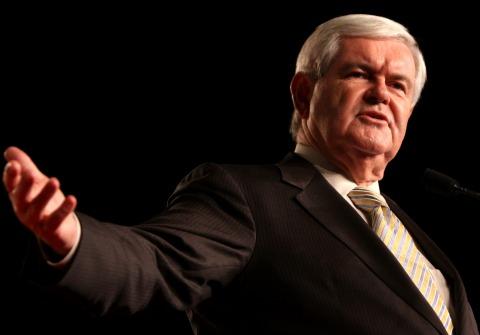 Remember Newt Gingrich? You know, the guy who pushed for Clinton's impeachment circa 1998, only to then screw over the Republican party with his mistress-bedding ways? Well, he's at it again with his, um, "morals."

When discussing Michael Sam's controversial smooch with his cutie beau after getting drafted by the NFL Rams, Gingrich touted his usual brand of close-minded conservatism. After many people posted social media death threats to players who were bothered by Sam's demonstration of love (to be clear, this was not cool, and we're not afraid to bash liberals for not playing nicely), Gingrich stated that the whole LGBTQ movement was "repressive" to straight people. Why? Because it forces non-gay people to comply by gay rules (wah wah).

Gingrich, it should be noted, has a long history of touting a moral stance despite his own immoral doings. In addition to lambasting Clinton over Lewinsky while enjoying his own marital affairs, he had the nerve to bash both the Bush and Obama administrations for playing faves with certain lobbyists and special interest groups despite his buddy-buddy past with Freddie Mac. Even Fox fucking News called him out on his lobbying for PhRMA.

Gingrich skates by on a false sense of "morality" that's getting shakier by the day. So when we see him go on air to state, passionately, that the LGBTQ movement is "repressive"—we cheer! This means that he's threatened. And if a rich white dude is threatened by something, that "something" must be mighty powerful.

Also, are you sensing a pattern? Gingrich condemns something, then does it stealthily. What the . . . never mind, we can't prove anything. We'll just let the rumors fly on their own.

Watch the clip for yourself and chug a coffee for every brief look of terror masked by smugness in Gingrich's eyes.

Image: She turned me into a NEWT! Courtesy of, Wikimedia Commons