True Story: I Fell in Love With a Felon 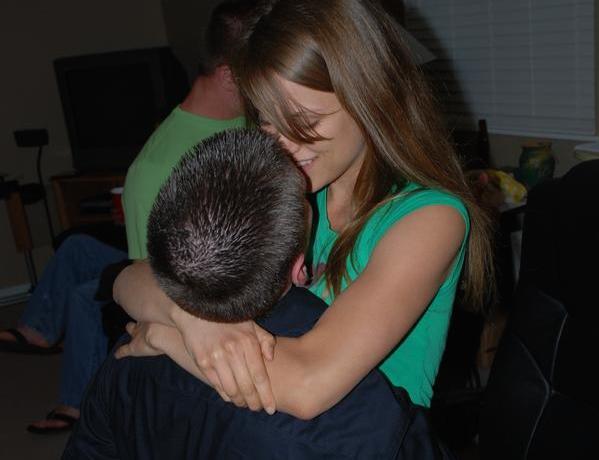 Recently, every heterosexual woman in the nation fell into fits of lust over Jeremy Meeks’ mug shot. Our logic tells us, “don’t be attracted to a dangerous man!” but our carnal cravings send us, ahem, quite a different message. I don’t know Meeks personally—he could be a terrible person—but I do understand the tendency to fetishize a “dangerous” person. After all, I once fell in love with a convicted felon.

As (relatively) minor as the crime was, the danger of the word “felon” lent a distinct flavor to our long term rendezvous. The overall experience taught me that there’s a very real difference between people and their societally appointed titles—the notion of peril that envelopes the word “felon” is not always applicable to those it describes.

I was 18 when I met *Zangeif. I was out with friends at a restaurant. His black shirt set off the blue of his rakish Russian eyes and I was instantly captivated. As luck would have it, he was our waiter.

When the check came, minxy little teenage me said, “so, do you have to work here every night?”

Immediately, he told me that he’d be off in 20 minutes. Should we hang out?

Forty-five minutes later, my friends and I were at Zangeif’s cramped apartment watching his roommate show off his DJ equipment. We talked about camping, and other PG-rated activities. Months later, he would tell me that he was shocked that I wanted to see him again.

But I did. I really did.

We got coffee not long after. Zangeif’s charismatic smile, the one I grew to crave and love, drew me in and had me giggling stupidly. Then, things got serious.

“Giana, I need to tell you something.”

Damn. He has a kid. Is he married? Perhaps he’s Batman.

“I’m a convicted felon. I’ll be going to jail for 31 days. I was a night auditor at a hotel. I was two months late paying rent, so I stole some TVs from the hotel. I planned to sell them and get back on track with my life from the money I got.”

I just sat there nodding like a bobble head. Current me (at the ripe age of 25) would have thrown the table over and run straight to my dilapidated Toyota. Being Batman would have been so much better.

What did I do instead?

My exact words escape me, but I probably said something along these lines:

“Wow Zangeif! You’re so honest! I bet you’ll change your ways just for me and everything will be peachy forever and ever!”

Zangeif got in a work-release program. This meant that he was allowed to work while in jail. At every shift, I drove to his restaurant and had sneaky make out sessions with him. I’d be lying if I said that his sentence provided no additional thrill—defiance is hot.

More importantly, I was falling for him.

Zangeif was released early for good behavior on Valentine’s Day. Though I was away with friends that weekend, we decided that February 14th would be the day we “officially” became a couple.

The next year and some odd months were a blur of Robot Chicken marathons, hookah bar outings and lip gloss-smearing kisses. I loved him. I really did. The worst days were instantly brightened just when I thought about him. My naturally cold limbs never shivered when covered by him. I imagined his past would cease in relevance—after all, it was theft, not murder. People make mistakes. We move on.

Everyone knew about Zangeif's past and people wanted to talk about it. His probation forbade him from leaving the state, so countless outings were out of the question. And when a cop caught us getting frisky in my car (classy, I know), a whole force of police officers were called to assess the “felon on prissy looking girl” situation. Let me tell you something: you can’t fathom the true meaning of the word “embarrassing” until six cops accost you mid-nookie in a church parking lot.

Social situations got tense frequently. In front of Zangeif, friends would ask, “Giana, why are you dating this guy?” For at least the first six months of our relationship, he was listed as “The Felon” in my phone. Heath Ledger’s rendition of “Can’t Take My Eyes Off You” would sing melodiously from my sparkly pink phone, juxtaposing his listing in my address book.

In the beginning, the illicit nature of Zangeif's past enticed me in ways that both frightened and thrilled me. But by the time we said “I love you," I knew, wholeheartedly, that the illegal thrill was not what made me fall head over heels for this man. Yet, I realize that I was lucky. Love assaults common sense, and it’s easy to rationalize red flag behavior. Even though our relationship was far from perfect, I never found myself the victim of theft—or worse. Our friends didn't either.

Eventually, we split. The reasons for our breakup had nothing to do with Zangeif’s charges. At the end of the day, we were incompatible.

People do bad things, but sometimes the labels they're given obscures our vision of who they really are. The same can be said for good actions. We are ever-complex beasts comprised of mistakes, triumphs, successes and failures.

From where I stand today, my time with Zangeif feels like a distant memory—I pulled a wild card, but I don't regret it.