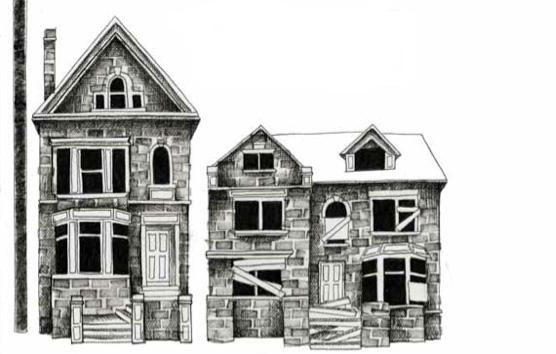 All illustrations by Kristen Rebelo

Black—the whispered word in educated, politically correct, upper middle class society. Rub shoulders with certain people growing up and you're encouraged to say “African-American,” no matter that it's a white person telling you what a black person wants to be called. Three questions may at some point run in your head, though you're unlikely to ask your well-heeled company for an answer:

Any of these questions would spark controversy and controversy is not welcome in country clubs. Just clench your teeth and nod. This person is writing your college recommendation letters. Or at least that's what your parents will likely advise you to do. Translation: Put your head down and mind your own business. It worked for us and it'll work for you.

Mandela is dead. 27 years in prison and a lifetime of activism, and the world still has a lot of changing to do. Today nearly a third of blacks live in poverty in the United States. Compare that to about 10% of non-Latino whites. 52% of black males in this country graduate from high school, compared to 78% of non-Latino white males. In 2009, the Department of Education stated that more than  50% of black children in 4th grade across the nation do not read or write at grade level. Numbers, numbers, numbers, but what we really connect to are stories, faces, names.

I remember tutoring Spanish in high school instead of babysitting because, frankly, it paid better. One of my regulars was a blond, blue-eyed boy named Alex.* Alex was a sweet boy who claimed he was failing Spanish because there were three blonde girls in his class. The implication was, of course, that these girls' beauty distracted him. Mine did not. By the end of the year, I'd helped him raise his grade to a B-. But all that really matters about this tale was that Alex is white and was raised with a certain mindset common in our neck of the cul-de-sacs.

One afternoon, in his usual effort to divert me from teaching, Alex started telling me about his weekend. He talked about piling into a car with his friends in our leafy suburban town—the People's Republic of Arlington, Virginia—and catching a concert in D.C. Somehow, driving back, he and his friends ended up in the “ghetto.”

I asked him what he meant and where he was. (I didn't really feel like going over the subjunctive case right away, either.)

I was shocked mainly because you'd have to get pretty lost to drive from downtown Washington and end up in Anacostia when your destination was North Arlington. Even if you were taking the Metro, the two places are almost at complete opposite ends of the Orange line.

“Are you sure you were in Anacostia?” I asked.

“How could you tell?”

Alex looked around, bowed down to the table, and said, “There were black people.”

“You know that black people live in places other than Anacostia, right?” I tried to casually explain as I thumbed through his textbook. “And that your use of the word 'ghetto' wasn't kind, appropriate, or correct, right?”

Blank stare. Pause. “Well, it looked dangerous.” “Did you see someone with a gun?”

“Then why did you think it looked dangerous?”

He gave me a knowing look. I recognized what he wanted to say but would not utter. I also realized that we had more grammatical points to cover than I cared to admit and only 45 minutes left to do so. I dropped my chance to educate Alex in a way that would probably serve him better than memorizing irregular verbs.

Alex listened to rap and hip hop “all the time.” Alex had “a black friend.” Alex threw “gang symbols.”Alex did not consider himself racist. Nonetheless, he held racist beliefs. A young man who thought segregation wrong and the 'N' word offensive still feared black neighborhoods.

Mandela's death should remind us that racism exists outside of institutions and seeps into our daily lives. Apartheid no longer stands as a law and yet it lives in so many people's minds. We have to pick up the fight from where Mandela left off. Speak up and don't give a damn who's writing your college recommendation letter or even if you're standing in the middle of a country club affair. Don't get discouraged. There's more than one way to be an activist.