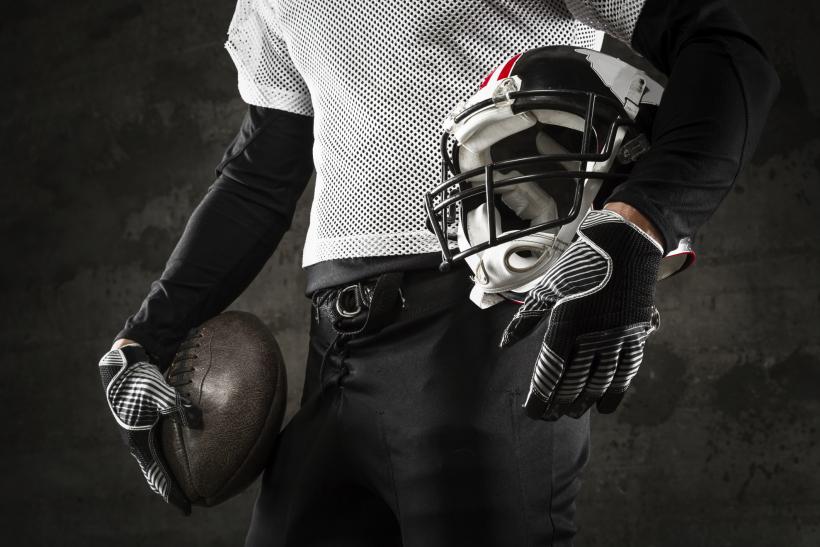 Football players are built to fight. Even a "playful" tackle from an NFL player would send me and my teensy frame straight to the ER. The thought (and, now, visual) of a fellow of that behemoth size and strength physically assaulting a woman is shudder-inducing—to say the least.

In the wake of the horrifying Ray Rice scandal, I got to wondering . . . just how often do such chilling domestic violence attacks by NFL players take place?

USA Today has compiled the arrest records of all NFL players spanning back to 2000. Looking back at the last ten years (note: this includes Roger Goodell's full reign and approximately three years of Paul Tagliabue's), the data are perplexing to say the least.

Yet, not for the reasons you'd assume, based on recent atrocities. I specifically looked at all reported incidents of domestic abuse, sex crimes, stalking, assault and battery (plus one restraining order violation) against women (side note: if you ever want to feel unbearably sad and resentful, you could emulate this exercise). The 86 cases were not shared evenly among the 32 teams. Some had zero, others carried the brunt of the statistics. Denver Broncos came in at the highest number of such arrests at 11. Out of these 11, only one player—Kevin Alexander, in 2010—was cut from the team. One player, Sam Brandon, was accused of third-degree assault and was slapped with a mere restraining order as a result. The Broncos suspended him for two games. Less than three years later, Brandon was arrested for violating the restraining order . . . and the team still allows him to suit up for them.

Clearly there's some screwy league "leadership" going on here. That said, the rate of reported domestic abuse involving NFL players is actually lower than that of the general population. Really. Following the Bronco's arrest record is the Miami Dolphins at seven. The numbers go down from there. In a perfect world, the numbers would obviously be zero across the board. But alas, this is not our world. And athletes are far from perfect. That said, the national average for crime is higher than that of the NFL's.

The problem is not the NFL itself in a vacuum. The true issue lies in existing societal misogyny and our idolization of athletes. We must first acknowledge that the aforementioned figures only take into account reported cases, and that given the profoundly complicated nature of domestic violence, many—indeed, far too many—incidents go unreported both in the realm of professional athletes and in the general population.

But the NFL-related violence is a special kind of problematic.

Why? Culturally, football represents something to us. Just the phrase "football season" opens a personal floodgate of memories, stemming back to my early childhood—I imagine this is the same with many, many other Americans, too. And the athletes that bring our beloved game to life are glorified. Advertisers throw them in commercials. Many consider athletes role models. The non-secular world flipped out when a study revealed that Americans considered professional athletes more influential that religious officials. People spent tons of money on replicas of jerseys worn by specific players—and all of this is considered totally normal! Reality check: aside from sports, how many times do you see folks walking around wearing the replica of someone else's work uniform?

Needless to say, this influence is vast. Given the statistic that one in four women will experience domestic abuse in her lifetime, you likely know someone who has been a victim. And abuse among us normalkins happens largely behind closed doors. This means that most of us don't often witness it. Yet, the presses stop when a lionized NFL player commits this specific breed of violence. Many spew outrage, but not all. And those who continue to support the abusive players send a detrimental message to society, reinforced by the choices of certain NFL franchises (*cough* Broncos).

As but one tiny example, Ravens officials announced that fans could exchange Ray Rice jerseys for one of a different player. Yet, some still wear Rice's journey. Whether or not supporters intend to do so or not, demonstrating allegiance to Rice sends a message that says, "I'm okay with what he did."

Just imagine how that feels to the domestic violence survivors around the world.

Sadly, it all comes down to economics. Losing a star player could be detrimental to a team's standings and, consequently, a loss of money. Thus, by letting players off with a warning and allowing them to continue playing (or only releasing them after, say, two violent videos and much public outcry), the message is simple: money and team standings are more highly valued than the well-being of victims.

Influence itself is the core issue. Even though the rate of reported violence within the NFL is smaller than the general population's, the highly visible nature of players' actions, and how these actions are so often seemingly condoned by team coaches and commissioners, has incredible power in our football-worshipping society. Even though most Ravens fans have turned their backs on Rice, the ones that haven't are spreading noxious ideas across our nation. This is dangerous.

As domestic violence and misogyny rage in the larger world, the NFL has the opportunity to illuminate a moral wrong and seek ways to end it. The Colts (who had two arrests in the last decade) donated $100,000 to a domestic violence charity called Julian Center. It's small, but measures like this in the wake of such horrific events may be a tiny step in the right direction for a less violent future—both within the NFL and without.