Show's Writer Demonstrates That Once You Go Orange Is The New Black, You Never Go . . . Straight? 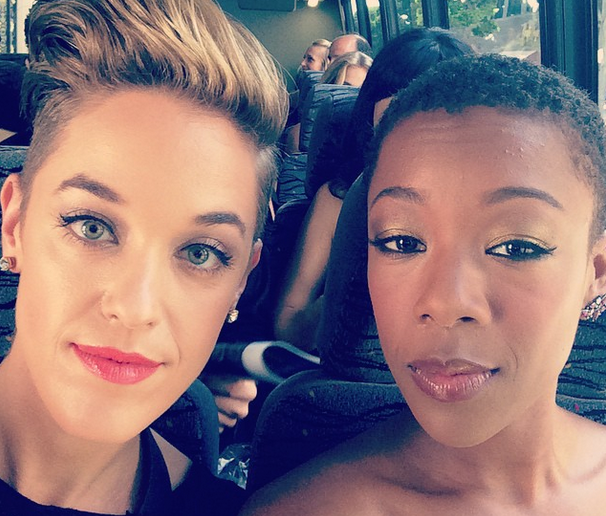 As a raging Orange Is The New Black fan, I always knew Poussey (played by Samira Wiley) had game—both on and off screen. This little notion? Just proven; one of the main writers for the show, Lauren Morelli, recently began dating the star.

What makes this even more notable? Morelli was previously married to a man. And, according to the writer, it was her involvement with OITNB that helped her come to terms with her sexuality. It involved, of course, falling into and wrestling around in a pit of despair and self-doubt:

"I was nervous about the first love scene I'd written for Alex and Piper. I'd loved writing it, loved watching a tenderness emerge in their relationship where passion always seemed to be the ruling principle, but by that time, I was so deep in my own self-doubt that I constantly felt like a fraud. I was sure it was bleeding into my writing. How could it not? I was married to a man, but I wasn't straight."

Her eloquently written about struggles surface some real truths about human sexuality—and how darn complicated it is.

The Fluidy Of Human Sexuality

People are quick to leap to definitions. But the reality? Life and human sexuality are incredibly complex. So maybe Morelli is 100% a lesbian; we can only speculate based on her writing and statements. But the same can't be said for everyone.

In fact, it's long been speculated that sexuality is fluid. Alfred Kinsey (with his bowtie collection), widely recognized as the first major American sexologist, theorized that everyone fell on a spectrum. Numbered zero through six (with zero being 100% straight, and six 100% gay), this chart dictates that most people fall somewhere in the gray area. Whether it's through private fantasies or secret sex lives, most harbor attraction to both men and women.

And Kinsey wasn't the last person to theorize this. More recently, doctors Olive Skene Johnson and Lisa Diamond have also discussed this fluidity. The late Dr. Johnson (RIP!) suggested that our sexuality can be summed up as a mosiac: Our pasts, genes, hormones, gender identities etc., are too complex and individualized to be assigned on a mere binary basis. This makes sense. I consider myself heterosexual, but I value intelligence and lust first and foremost—with physical attractiveness a secondary consideration. Thus, I hardcore crush on Olivia Wilde. Over simplifying? Yes, but you get the point.

Dr. Diamond echoes similar sentiments. In an interview with Huffington Post, she stated:

"The hard truth is that life is a lot more complicated than scientific models present it as being."

Though Dr. Diamond's work has focused primarily on women, she hopes to tackle men's issues next. In her findings so far Dr. Diamond has determined that lady sexuality is ever-evolving, BUT that this fluidity is not a choice. Attraction just happens. People fall in love for no rhyme or reason. Her subjects apologetically explained that they weren't "normal" in their sexuality swapping—but Dr. Diamond found that such switching around is "normal."

Morelli in her swap for Samira, then, is merely demonstrating her being human.