Female Cosmonaut Is, Of Course, Asked About Her Makeup And Hair 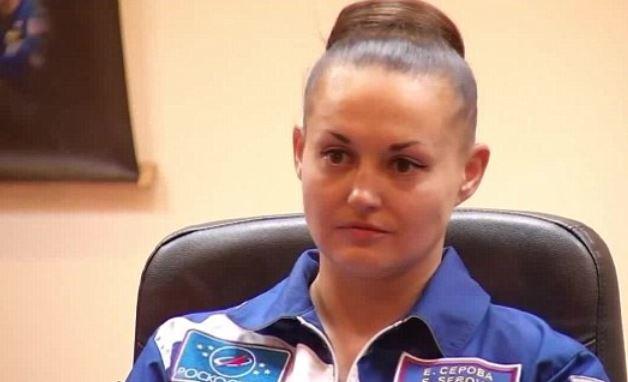 Yelena Serova's not having it. We shouldn't, either. (Credit: YouTube)

Yelena Serova, a disciple of the Moscow Aviation Institute, will soon serve as a flight engineer—and conduct biophysics and medical experiments—aboard the International Space Station. She will be the fourth female cosmonaut from Russia to head to space, and the first ever aboard the ISS.

There are seemingly hundreds of compelling questions to ask about this significant mission and Serova's key role in it. Instead, at a recent press conference, a reporter asked this:

"You are the first woman cosmonaut in 17 years, so what are you expecting from that flight? Are you going to take make-up with you?"

Yes, that's right: This highly trained female cosmonaut was asked about how she's going to stay dolled up while exploring biophysical properties aboard an international space vessel.

Serova's response? With visible irritation, she completely ignored the first part of the question (and the second question on makeup altogether), while pointing out the inaccuracy of the second half:

"Answering the second part of your question about women cosmonauts I would like to make a correction. I will be the first Russian cosmonaut on the ISS."

It'd be one thing if the embarrassment ended there. But oh, it didn't. Following this inane question, still another journalist posed this thought-provoking query:

"Can you tell us about your day-to-day life on the station? For example how are you planning to do your hair?"

This time, Serova was less diplomatic in her response:

"And I have a question for you! Why don't you ask about Alexander's (a male cosmonaut) hair? This is my answer. I'm sorry."

What's perhaps most interesting about this story is how very much it feels like deja vu.

Indeed, the number of inane, sexist questions journalists ask formidable, impressive women is one of those many regular reminders that—newsflash!—misogny is still kicking. To list but a few other recent examples . . .

*In January, at a Television Critics' Association press conference, a reporter said this to Girls creator Lena Dunham and producer Judd Apatow:

“I don’t get the purpose of all the nudity on the show—by [Dunham] in particularly. I feel like I’m walking into a trap where you go, ‘Nobody complains about all the nudity on Game of Thrones,’ but I get why they do it. They do it to be salacious and titillate people. And your character is often nude at random times for no reason.”

Apatow replied: “That was a very clumsily stated question that’s offensive on its face, and you should read it and discuss it with other people how you did that. It’s very offensive.”

Dunhan retorted that her nudity was “a realistic expression of what it’s like to be alive. But I totally get it. If you’re not into me, that’s your problem and you’re going to have to work that out with professionals.”

*In 2012, at a press conference for The Avengers, a reporter asked a (normal) question to Robert Downey Jr., followed by a (ridiculous) question to Scarlett Johansson:

“I have a question to Robert and to Scarlett. Firstly to Robert, throughout Iron Man 1 and 2, Tony Stark started off as a very egotistical character but learns how to fight as a team. And so how did you approach this role, bearing in mind that kind of maturity as a human being when it comes to the Tony Stark character, and did you learn anything throughout the three movies that you made?

“And to Scarlett, to get into shape for Black Widow did you have anything special to do in terms of the diet, like did you have to eat any specific food, or that sort of thing?”

Scarlett's response? “How come you get the really interesting existential question, and I get the like, 'rabbit food' question?”

*Just a couple months ago, in perhaps the most outrageous example of all, a journalist dropped this statement on Indian actress Parineeti Chopra (and no, we don't know why. No one knows why.):

“When girls are young, they like ‘it’ and when they get old, they start shouting and screaming that the boy exploited them."

“As per convenience, how can you blame it that girls like ‘it’ when they are young. I think, that’s ridiculous, I think that’s very disrespectful to say to a girl. I think, if there is sex, or a kiss, or a hug, there are two people there and not just the girl.”

Sexism In The Media

Here's the good news about all these stories: They've shed a garish light on the media's latent sexism.

Here's the bad news: Ire over these offensive press questions is pretty much the only thing putting heat on the media to change its ways. Insofar as we can tell, none of these reporters faced professional disciplining as a result of their questions, nor did anybody in the industry examine why such misogyny-laced questions are dangerous. In other words, these stories haven't led to any meaningful institutional reflection or change.

But it's important to hold journalists accountable for their actions. They are supposed to be, to the best of their abilities, fair and objective. The problem with misogynistic inclinations is that they can spread like cancer, finding their way not only into loaded questions at a press conference, but also into stories that reach thousands, or even millions, of readers. Journalists are, for better or worse, powerful; if they're perpetuating misogyny, this is a potent problem.

For this reason, journalists need to take a cue from the high-profile women fighting back against latent sexism—and similarly work to recognize and retaliate against entrenched misogyny. These stories of ridiculous press junket questions may be compelling, and even amusing, but no one benefits from them . . . least of all the media or the public it serves.