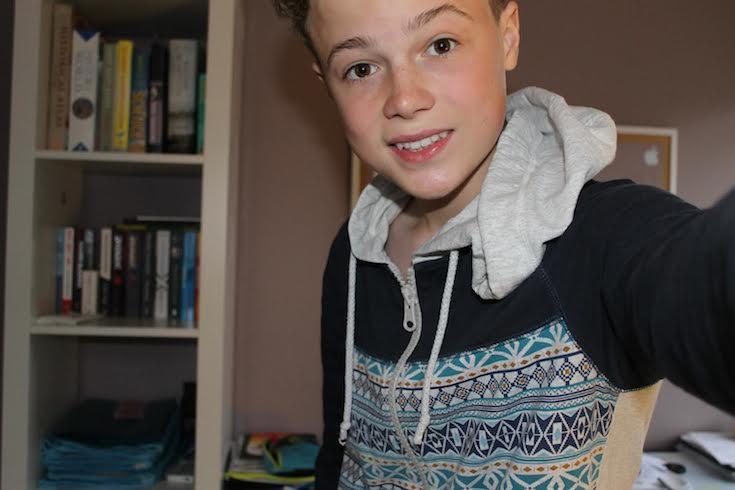 In a move so mature it eclipsed the abilities of most men three times his age, young Ed Holtom recently shared a message with the world so powerful, it went viral: He declared himself a male feminist, pledging allegiance to Emma Watson's message in her speech to the UN. In an eloquent letter to England's Sunday Telegraph, the 15-year-old British student shared his thoughts about gender equality. (You can read the full text, which is highly recommended, here.)

"The definition of feminism is, ‘a person who believes in the social, political and economic equality of the sexes.’ It’s pretty simple really, and if you believe in those things, then you’re a feminist . . . Recently we’ve been hearing about what it means to be ‘masculine’ and what it means to be ‘feminine’. It means nothing, barring biological differences. By perceiving these two words as anything other than the description of a human’s genitalia, we perpetuate a stereotype which is nothing but harmful to all of us."

We reached Ed to talk more about his views on gender and the reactions he received in the wake of the headlines. And while he possesses obvious intelligence, we're here to tell you he's a quintessential "normal" teen. He lives close to London, volunteers for an elementary school, and has lots of friends. If his letter weren't an indicator, he is also quite creative: He sings (for himself!) and participates in his school's drama club.

Despite being a typical teen, Holtom could teach us all a thing or two about what feminism means in the modern age.

What sparked your interest in feminism?

I guess it was Beyoncé who first got me interested in feminism. Before, I didn't really know what it meant or what it stood for. Then I realized that I have always been a feminist without knowing it, in that I have always believed in the social, political and economic equality of the sexes.​

What did you friends think?

I didn't really talk to my friends about the issue of gender equality before the letter was published, but now I think they've realized that just because you're a boy it doesn't mean you can't be feminist. Everyone has been really supportive and I've been really surprised at how many people have come out and agreed with me.

What did you parents teach you about feminism?

When I was growing up, it was always a very equal split in terms of income earning and jobs around the house. Both of my parents have always been very accepting of everyone's opinions and of people from all walks of life, so I think that helped, too.​

Have you received any negative attention for the letter you posted? If so, how have you responded?

Yes there has been some backlash on websites, but these comments are in the minority. What I mostly think is that I will never meet any of those people and, even if I did, they most likely wouldn't say those things to my face. In real life, if someone has disagreed with me, they haven't called me wrong, they just wanted to know more about what I meant in certain parts of the letter, which is great. I'm always happy to have a mature conversation with someone about it. There's no point in calling people who don't agree "wrong"; that won't change anything. Overall, the reception has been positive and respectful.​

There's a debate about the word "feminism" itself. Many argue that a better term is "gender equality supporter" (or some catchy name to that effect). How do you feel about this?

Well, I'd describe myself as "a person who believes in the social, political and economic equality in the sexes," which is the phrase Chimamanda Ngozi Adichie uses as her definition of feminism in her talk "We Should All Be Feminsts" at TED. However, some people feel uncomfortable using this term. I would say that feminism's goal is gender equality, so a feminist in the context of Ms. Adichie's speech would also be seen as a "gender equality supporter."

What do you wish adults understood about teenage feminism?

I wish that adults understood how much influence pop culture and celebrities have over teenagers. I wish they realized that, though we are young, we are still capable of rational and logical thought, and still take interest in subjects such as feminism and gender equality. Most teens are concerned about the future, as we will be the ones living in it.​