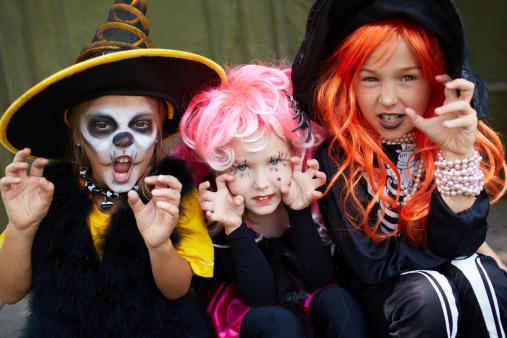 The following exchange between an angry rich lady and an advice columnist is so over-the-top that it seems like a hoax. But it's published by Slate's advice segment—Dear Prudence—so it's likely to be the real deal.

Apparently, a woman from "one of the wealthiest neighborhoods in the country" wrote to Prudence to air her complaints about kids "who are clearly not from this neighborhood" that dare litter her precious street with their candy demands and costumes. The horror!

What's actually horrifying, though? The massive income gap plaguing our nation. It's been speculated that the globalization and technology have slowly split workers into two groups: high earners, and low earners. Worse yet, in 2012 it was recorded that the top 10% of earners took more than 50% of the country's overall income. I mean, really? The notion of the American Dream is as unreachable as it ever has been—all while university tuition costs are constantly rising. Class mobility? Not really crackin'. So it's likely that the kiddos infiltrating this neighborhood will never rise out of their economic class . . . and all they wanted was some dang candy.

Even if the advice altercation was sparked by a phony letter, its message illustrates a very real issue. And if the letter is real, well, I think we may have found the Halloween Grinch! Will her heart grow when she sees the tiny cartoon costumes? Maybe the gratuitous Milky Way bars will melt the ice inside her soul?

Regardless, Prudie's response is fantastic. Check out the exchange below . . . and maybe shell out a little extra candy for the kids in your neighborhood to cosmically compensate for this grinch:

I live in one of the wealthiest neighborhoods in the country, but on one of the more “modest” streets—mostly doctors and lawyers and family business owners. (A few blocks away are billionaires, families with famous last names, media moguls, etc.) I have noticed that on Halloween, what seems like 75 percent of the trick-or-treaters are clearly not from this neighborhood. Kids arrive in overflowing cars from less fortunate areas. I feel this is inappropriate. Halloween isn’t a social service or a charity in which I have to buy candy for less fortunate children. Obviously this makes me feel like a terrible person, because what’s the big deal about making less fortunate kids happy on a holiday? But it just bugs me, because we already pay more than enough taxes toward actual social services. Should Halloween be a neighborhood activity, or is it legitimately a free-for-all in which people hunt down the best candy grounds for their kids?

—Halloween for the 99 Percent

In the urban neighborhood where I used to live, families who were not from the immediate area would come in fairly large groups to trick-or-treat on our streets, which were safe, well-lit, and full of people overstocked with candy. It was delightful to see the little mermaids, spider-men, ghosts, and the occasional axe murderer excitedly run up and down our front steps, having the time of their lives. So we’d spend an extra $20 to make sure we had enough candy for kids who weren’t as fortunate as ours. There you are, 99, on the impoverished side of Greenwich or Beverly Hills, with the other struggling lawyers, doctors, and business owners. Your whine makes me kind of wish that people from the actual poor side of town come this year not with scary costumes but with real pitchforks. Stop being callous and miserly and go to Costco, you cheapskate, and get enough candy to fill the bags of the kids who come one day a year to marvel at how the 1 percent live.