The Crystal Maze: A Game Show Where You Can Laugh At People's Failures In A Non-Oppressive Way 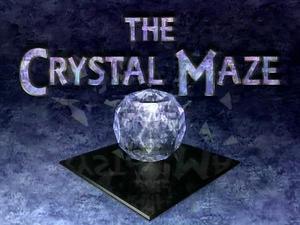 Feminists are not humorless. If anything, a critical self-reflection of the jokes we tell and hear enables us to understand in what ways a joke is funny because it reinforces a toxic antipathy towards marginalized people.

Ergo, vis a vis: we have a superior sense of humor.

The feminist over-reaction to a sexist/racist joke, if it ever actually happens in real life, is not about policing your language, but shouting down the knee-jerk impulse to accept something harmful and gross as “funny,” thus creating mindspace for oppressive apologia to grow.

We all laugh on the inside to jokes we shouldn’t. Even—especially, perhaps—those of us trusted by our communities to speak out and educate others on oppression and social justice.

I was not raised in some isolated monastery nestled in the Andes, sent down to speak to the strange city folk about feminist art critique on the abbot’s orders. I was raised in the same racist, sexist, homophobic society as you.

And sometimes I fuck up and laugh at a joke I know is harmful—or even say one to a friend “in private.” I surrender to my conditioning. I let myself feel the fleeting comfort of “knowing how to take a joke,” tacitly acknowledging my status as “on the winning team” of society.

I do not claim that, as an educator or journalist on social justice issues, that I have a clean slate. What makes me confident as an educator is that when mine is found filthy I will drag that shit out and show it to everyone. Look at this filthy fucking slate. How did it get so filthy? Glad you asked: I made a PowerPoint.

I strive to do and be good—to people—and this involves not making the people I fight for feel unsafe around me by laughing at or making a joke that suggests I see the whole of their experience and identity confined to a caricature.

I am thus ensnared: while I am to do good, I don’t see myself or wish others to see me as nice.

I like being mean. It’s not just some predicament of my programming that I tolerate. Being mean brings women to my house bearing flowers and, on occasion, diverts the attention of online harassers and stalkers away from people who have fewer spoons. You need two hours to kill? Tell a man on twitter that you think he’s boring. Tell him that his hat sucks and his vocabulary is wanting.

I’m not a “save the world” type—I would say I am more motivated by the destruction of patriarchy than by peace and friendship. But you know, I’m sure once we get to 1 in 3 women not being abused by their male partners, I’ll acclimate just fine.

Still, antagonizing white men on twitter is not a long con—or sustainable. Eventually you upset one who has a van and he parks outside your apartment taking pictures. And then you hide out with your girlfriend for a few days and watch game shows.

Essentially: it’s Legends of the Hidden Temple for hapless adults stranded in a dime store Disneyland.

A team of six average folks are led by Rocky Horror creator Richard O’Brien through approximated Aztec ruins and faux futurescapes, locked in puzzle rooms to obtain crystals that, when cashed in at the end, give them five seconds in one of those “money swirling” things that almost no one ever wins.

It is 45 minutes of watching grown people fall in mud pits and crash remote control cars to the ambient screams of frustration of their teammates. And sometimes the crew themselves.

The show delivers that once nameless desire: the ability to laugh at people for their failures—without kicking people while they’re down.

When we laugh at people, we must consider “the stakes.” When you heckle a person of color’s speech or giggle b

ehind the back of a visibly trans person, you are condoning the societal conditioning (or setbacks) that made that person a target in the first place. You are saying “you deserve to be afforded fewer educational resources and then to be shamed for modifying a language to suit your needs in that absence of inclusion.” You are saying “the white, colonialist standards of beauty that immediately identify and point out anyone who deviates from them are good and you suck for not being able to meet them.”

But there are no stakes in The Crystal Maze. The prizes, which only 20% of contestants won, are not a check to clear your debt or a bypass through a bureaucratic hurdle holding you back from lifesaving medical treatment.

Even the host thinks the prizes are shit.

The cost of failing to navigate a miniature labyrinth of mirrors is to be “locked” in the room—to have some snacks in the green room. And the ability to walk across a room of tiles with words on them in the correct order has no real life relevance—it’s an innocuous feat that failing to accomplish in no way hinders your movement through the world. And these are adults anyway—accountants and police officers. If they do experience shame and trauma around losing a game show that is renowned for being almost impossible to win in the first place, they have by then, surely, acquired some tools to cope and process that.

Which is to say: do not apply my logic to Legends of the Hidden Temple. Do not laugh at a child who trips over themselves.

I would do poorly at The Crystal Maze—and there’s an 80% chance you would too. When I laugh or scream, disbelieving, at the screen, there is a subtle gratitude that it’s them dragging a skeleton around a sound stage, and not me.

For a brief moment, falling into a pit of mud seems a worse fate than, you know, hiding out at my girlfriend’s apartment because strangers have been coming by my house and calling my mother. The contestant is a fool but if I were on this show I would be a fool too. I’d still agree to be on that show though—no fucking doubt. Laughter is a means for the steam created in that dissonance to escape.

And when you drop the skeleton and leave the room, that’s it. You just become normal again—safe. Your failure has, save for a Buzzfeed gif two decades later, no lasting impact on your life or the larger social narrative.

You did not leave that sunken ship with any less of your humanity intact. You might have left with more, actually. Failure is a constant of the human condition, and something we should acknowledge and celebrate, if only by taking ephemeral refuge in the completely benign failures of others that have no stakes.

Someone singing on American Idol has a stake. A girl whose Facebook photo is made into a misogynist meme has a stake.

But the only thing at stake in The Crystal Maze is Richard O’Brien’s patience, an often strained but strangely abundant commodity.

That quip may not reach 1% the audience of your racist/sexist/homophobic/ableist “joke,” but it also hurt less than 1% of the people your unimaginative and noncommital foray into active, direct oppression. All so your joke can maybe beat out the other 2348 gems of ignorance to make it to the top of the Reddit thread.

Meanwhile I’ve cornered the “Richard O’Brien joke” market and at no human cost.