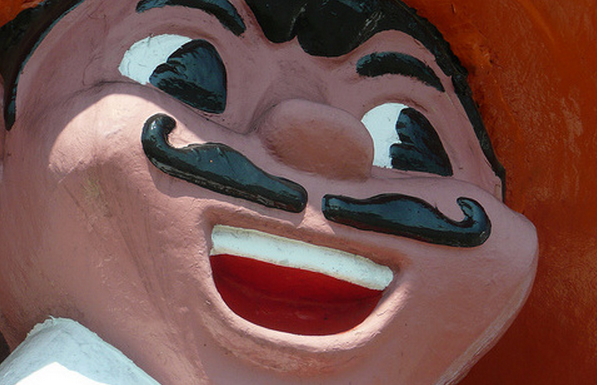 Dad came to the land of the free in 1963, nine years after the U.S. government ran Operation Wetback, a mass deportation of undocumented Mexican immigrants. The term was coined from those Mexicans who illegally crossed the Rio Grande to get here.

He was five years old in 1963 and sickly, too young to remember most details of his journey to California, but he was certain about this: they traveled by car all through the night. It was a crowded car, carrying his two brothers, his three sisters and his two adventurous parents.

Dad didn’t cross water, but that didn’t stop the American kids in his new school from calling him a wetback because he didn’t speak English.

He couldn’t tell them, “We didn’t cross the Rio Grande; we drove here.” He just buried his head into his foreign book and focused a little harder on the meanings of these new words, having no choice but to hurry up and learn them.

They didn’t have ESL classes then.

His dad, my grandfather, who had been an orphan in Mexico, worked with his hands his whole life. He spent his days grinding metal for airplane parts until the end of his sixties when his tired fingers couldn’t do it anymore.

My grandmother worked in a kitchen.

They desired one thing above all in coming to America: a good life that could not be guaranteed to them under the corrupt political system of their home country. They desired the American dream.

He played on the football team.
He listened to Black Sabbath.
He loved the movie Harold and Maude.

And he met my mom in L.A., at an auto repair shop where he was selling tires and car batteries, gaskets and oil filters.

Mom, a second generation Mexican-American, couldn’t believe he was born in Mexico. His skin was so light—lighter than hers!—his eyes so blue. There was no accent left in him. No hint of that place just two hours south (even though Dad was from Mexico City, even farther south).

He hadn’t crossed water, and he told her this, but she called him a wetback anyway. This time he only halfway minded. The way she said it was less teasing, more endearing. A cariño in a way.

Dad traded his oil-stained jumpsuit for a suit and tie, his Volkswagen bug for a BMW and he married my Mexican-American mother.

They had three kids and for whatever reason, maybe laziness, maybe rebellion, they didn’t teach any of us Spanish. And so this language of conquistadors, of ancestors, became the tangled, undecipherable words of secrets, of gossip, of stories too juicy for my young American ears. The language Mom and Dad would use in the front seat of the family Suburban when something was too risqué to share with us kids in the back, strapped in and staring at the swirling window contents, trying to decode the mysterious substance of our past. We eventually gave up.

And this gap between there, where I came from, and here, where I live, only expanded. I made one choice after another to keep my past untouched. In high school, I studied French. In college, I studied Italian. I only dated white boys. And though I grew up on the east side of L.A., a predominately Mexican area, I went out of my way to shop, eat and party on the west side.

Was it shame? Carelessness? Rebellion? Yes, probably, maybe. Growing up, there was no George Lopez on T.V. Salma Hayek was an anomaly. T.V. was as white as Brenda Walsh and D.J. Tanner, Carol Seaver and Kelly Kapowski. So were the presidents. The CEOs. The heroes we studied in textbooks.

I still heard the word wetback sliding around conversation, even amongst Mexican-Americans like myself, used as a noun: He’s a major wetback, or as an adjective: That cowboy hat is so wetback. It was the word associated with the gardeners, the busboys, the maids, the cooks. The nannies, the janitors, the construction workers, the pickers. That guy selling oranges on the side of the freeway? Wetback. The woman selling roses on the other side? Wetback.

There was no way to know if these people crossed illegally, but the term stopped being about legality somewhere along the way.

Guiltily, I sometimes used the word as a joke, a tinge of shame embedded in its smack on my lips—shame that I was connected to these people, but more shame that I never really allowed myself to be.

So I became a traveler. A nomad. I got as far away from East L.A., from Mexico, from everything I knew and wrestled with. I ticked off European countries like items on a grocery list and only came home to brag. Then I moved to Asia, fell in love and carried this love back home with me to East L.A.

You see, as I added more birthday candles to my cake, I also asked more questions of my existence. What was this shame connected to that wordwetback? And had it only been learned from outlets like Fox News, whose hosts and guests still think immigrants arestealing jobs and even stealing lunches? Or from people like Virginia attorney general Ken Cuccinelli who recently likened immigrants to rats, or Texas Republican Louie Gohmert who thinks being “Hispanic” is an act.

What about the amazing feat of risking all that is known for a dream? For one’s family? To not just make a living, but live an extraordinary life? My grandparents lived by humble means, but they held tight to the idea that their children and children’s children would do better. It’s a sentiment so rooted in the fabric of this country, I’m astounded how often it gets forgotten.

My parents were married in 1979. My husband and I were married in 2013. And because my husband is from Australia, I, too, married a wetback. Only wetback is more appropriate a word here since, unlike Dad, my husband actually did cross a body of water (a few of them) to get here.

Dad came to this country with a passport in his hand, pursued a green card and eventually found citizenship, but that didn’t stop that word from tarnishing his journey along the way. And what a long and complicated journey it was. Yet I watched my husband make but two visits to an expensive lawyer in Beverly Hills and find a way to have it done in months.

My husband’s blonde hair and white skin and perfect English (even with its funny drawl) keep him exempt from that word, but these days I use it anyway. Less like the kids at Dad’s first American school, more like Mom’s cariño.

This holiday season, I’m thankful for so much. For the wetbacks I love and the new ones that will come. For the end of hiding for people like us. But most especially, I’m grateful for that kind of audacity only an immigrant can know. To set out bravely for the unknown with no guarantee extended to them, risking everything for a dream.

If you like this article, please share it! Your clicks keep us alive!
Tags
Immigration
racism
Mexican
mexican-american
wetback
Hispanic
Mexico
american dream