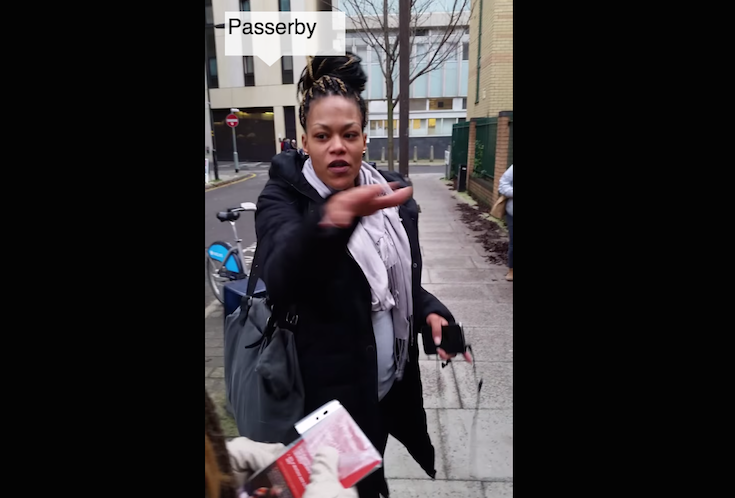 Giana Ciapponi
SHARE
As anyone who has ever lived near a Planned Parenthood clinic can tell you, anti-abortion protesters are just about the worst slice of humanity the big G ever carved up.
I don't care if the thought of abortion horrifies/deeply offends/goes against everything you believe in—the sheer propaganda and bullying that occurs outside such clinics (from what I've witnessed with my own eyes)—is nothing short of straight-up harassment. The problem with these foaming-at-the-mouth fetus lovers is that they fail to understand that nobody relishes the thought of abortions. It's a harrowing, sad experience. Nobody is "pro-abortion"; rather we support the right to choose. And the difference between those two notions is a cosmic-size chasm.
Now that we got that little diatribe out of the way let's head over to British journalist Sunny Hundal, who caught a group of anti-choice protestors lined up outside a clinic. One male protester had a camera positioned perfectly on his chest; the ideal height for catching each patient attempting to enter the premises. Hundal confronts the camera-wearing dude, and asked him the intent of his filming. The man stutters, mumbles some fallacious nonsense, and generally looks like he's lying his face off.
Then, a pregnant woman speaks up. Quickly, she shuts down an anti-choice protest wearing a hat that is clearly made of Yeti (magic! I'm telling you) and begins dropping some truth. Towards the end of her Oscar-worthy soliloquy,the unnamed woman explains that she works for a charity that helps inner city children. Safe to say, our new heroine has seen some stuff.
Her takedown is so epic, that we don't feel right transcribing it completely. We'll leave you with one gem, to get your gears turning:
"You don't know why people are doing what they're doing . . . I think this is so wrong, on so many levels."
Exactly. You never know why a woman has chosen to get an abortion, so to publicly lambast her on what might be the worst day of her life is just cruel. And ignorant.
So you can just go ahead and stop.
Watch the vid to get the full, fist-pumping message.