Hugh Hefner And Bill Cosby: What Happens When Your Friend Is A Rapist? 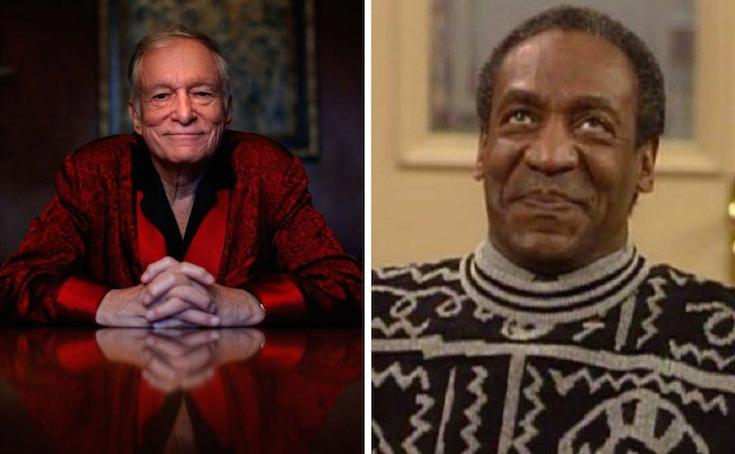 Like some devastating advent calendar, it seems as if each day this holiday season has been marked by a new woman identifying herself as a  Bill Cosby sexual assault victim. It's reached the point where accusing these women of lying is illogical—and those who deny claims sound not only out of touch with the facts, but more than a little misogynistic. What kind of belief system must you operate within to assume so many women falsified claims of sexual abuse?

For Cosby's many Hollywood friends, there's another set of issues to contend with. How does one reconcile accusations of abuse with loving and trusting the person who's been accused of it? For many pals of Cosby, it's been easier to assume the allegations are false than to admit his guilt. Among those to defend him are Debbie Allen, who called the allegations "hard to believe"; Willie Brown, who said his friend "can't disprove a lie"; and Whoopi Goldberg, who asked on The View, "Don’t you do a kit when you say someone has raped you?”

One friend, though, has stepped forward to express real concern over the allegations: Hugh Hefner. In a statement released to the Hollywood Reporter, the notorious playboy said:

"Bill Cosby has been a good friend for many years and the mere thought of these allegations is truly saddening. I would never tolerate this kind of behavior, regardless of who was involved.”

True, this is not an outright diatribe against Cosby—but as Jezebel noted, Hefner is one of the few friends of Cosby to admit there may be truth in the claims. And Hefner has reason to speak out, as, according to the allegations, some of Cosby's assaults occurred on the grounds of the Playboy Mansion.

When Your Friend Is A Rapist

In our adult lives, it's not uncommon to discover that a friend is hiding something. Sometimes it's innocuous—maybe your kickball buddy Sean is a closet Brony, or your straight-laced coworker Emma holds S&M workshops—but it can be shocking nonetheless. The feeling (as I've experienced it) usually begins with utter disbelief: "But, I thought I knew you. Were you lying to me the whole time?"

I'm sure Cosby was a great friend to Hefner. I have no doubt that Cosby supported Hefner during times of emotional distress. Likewise, I can assume that Hefner had Cosby's back during difficult situations. That's just what friends do.

But friends, even good friends, can also be rapists.

In my own life, I've had to contend with accusations about people I knew and (platonically) loved. I once spent a weekend pacing my parents' house with knots in my stomach over a particularly horrifying set of unprintable allegations involving a male family friend. As I tread the carpet, clutching my stomach, my parents made a good point: People are multi-faceted, and can do despicable things despite having qualities you admire and even love.

Last fall, XOJane writer Lindsay King-Miller reflected on the discovery that her good friend was a rapist:

"I miss my friend [the rapist]. He was smart and generous, and we had similar senses of humor and liked a lot of the same books. He made me laugh and cheered me on. The truth that’s still so hard to choke down is this: None of those things are in any way incompatible with his being a perpetrator of sexual violence. I still love him and care about him and want the best for him—which includes being held accountable for his mistakes—but I have to do it from a distance. I can't imagine a way for us to be close again. It is much, much easier to choose not to believe someone you care about could do such a thing, but everyone is cared about by someone, even people who commit violent, unforgivable crimes."

It can't be easy for anyone to acknowledge a friend is capable of rape—but in the case of Cosby, the situation has tipped from rumor and scandal into a near-indictment, and his friends have an obligation to stop blindly defending him, and begin the difficult process of reconciling that truth with their feelings toward him. For that matter, they aren't doing themselves or Cosby any favors by disavowing his transgressions rather than acknowledging them as part of who he is.

Hefner's already taken a step toward this difficult reconciliation process. For many of Cosby's other friends, that day of reckoning awaits.