This Week In Pantsuit Politics: Blind, Trans Parliamentary Candidate Fights Back Against The Haters 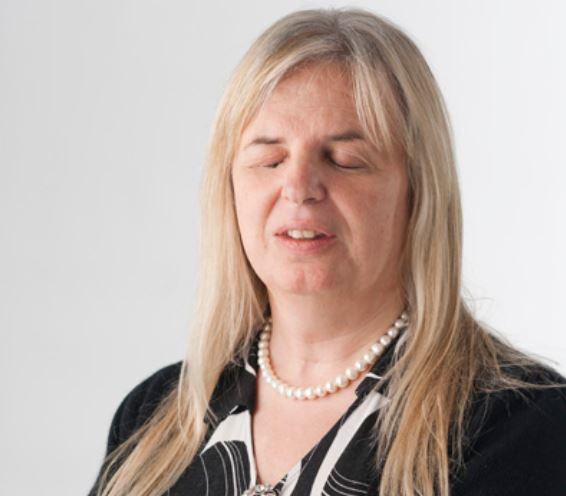 Brothers, currently running for Parliament, is perhaps the very definition of a remarkable candidate: Not only is she blind, having lost her sight to glaucoma as a child, but this week she revealed she is transgender.

In a just world, in another beautiful galaxy far far away . . . this would be cause for respect. Cue, instead, the nasty, insensitive ridicule!

In the Sun this week, columnist Rod Liddle made this "joke" in an effort to be "funny": 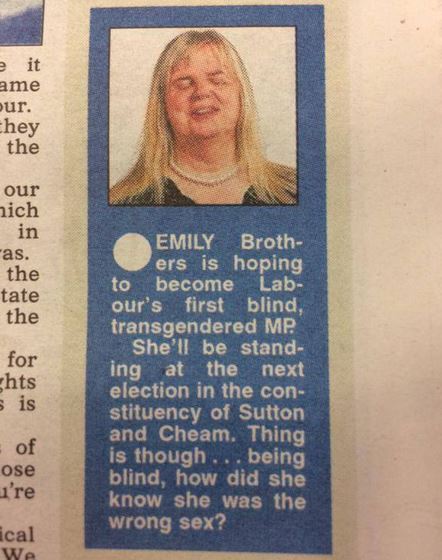 To reiterate: A massively popular publication with a monthly circulation of more than 2 million publicly humiliated a blind, trans woman. In a slight re-affirmation of humanity's goodness, many weren't pleased with the crass comments and took to Twitter to let their confounded outrage be known:

Who know who else wasn't pleased? Brothers herself, who pushed back in an altogether dignified and thoughtful fashion that only served to strengthen her case against Liddle:

“Personally I am OK and not distressed by his ridiculous comments. My position is that I think it’s a cheap comment that doesn’t surprise me coming from The Sun. But my concern is how other transgender people feel about these comments, particularly those who are going through the transitioning process and are fearful of other people’s reactions, and fearful of being ridiculed. The question I would ask him is this: When he turns the lights out, does he not realize he is a man?"

Brothers also penned an honest, poignant piece for The Guardian this week, explaining her decision to announce she was trans, acknowledging it as a "serious risk" but noting:

"There is currently a serious problem with trust in politicians. I’ve been worried that people would consider a lack of candour as just more dishonesty on the part of another politician. Trust is at the core of leadership and that requires courage at times, even if it goes against having an easy time of it.

As an advocate for equality, I have more credibility by speaking from personal experience. Speaking about my blindness or hearing loss has more strength than somebody who hasn’t walked that walk. That’s why I can add value to the great work being done by LBGT groups, as a politician who can draw on personal experience."

Brothers, from across the pond: You have our vote. (Liddle, even though you're not actually running for anything, you most definitely do not.)

It may have a cheesy name, but the recent "Women Rule" summit in DC featured one hell of an interesting session: “Conservative Feminists: Why It’s Not an Oxymoron.”

The discussion featured Republican Congresswomen Blackburn and Books, and Rep.-Elect Comstock, tackling a divisive issue head-on that has long been stuck in feminism's craw: the question of whether conservative women—particularly because they're often anti-choice—can or should identify as feminist. In a Washington Post op-ed that, while on the attack against liberals, nonetheless made some good points, Kathleen Parker wrote sharply of the political barrier dividing women in the push for equality:

"With women at each other’s throats, the patriarchy can pop another brew and hang on to the remote."

"Yes, women are different—as different as men are from one another. And until women accept those differences, they will remain minority players in a world that pats them on the head and sponsors summits where women rule, if only for a day."

This particular panel discussion may have been a half-hearted attempt at the improved solidarity Parker calls for—where, after all, were the Democrat women?—but it at least marked a step forward in addressing a fraught but significant issue that's rarely addressed. How far can feminism go if women who've started breaking the glass ceiling can't transcend their agendas for change?

Interestingly, this news has again raised the specter of Elizabeth Warren, who many Dems want instead in the race, but who has said she won't run if Hills does. Basically, the argument goes, if the pro-Warren movement is given more time to build up speed and support, Elizabeth may be given no choice but to throw her hat in the ring, even if Hillary runs. Which would create a compelling race, but one that certainly doesn't benefit Hillary.

Then again, this is all just speculation. And so it continues . . .