If I Ever Want To Get Married, I'll Do The Proposing 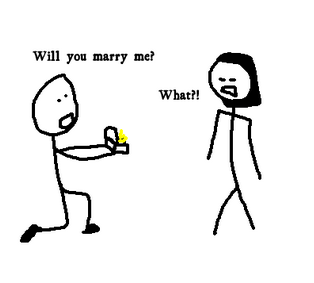 I'd like to begin this piece with an apology and an admission.

How awful to have that kind of clarity in your heart, to know that despite their aggressive love for country music, undercooked beef, their shrill neurotic sister, and slasher films, not to mention their utter inability to communicate without yelling a bit . . . they're just what you want.  How awful to not stand up and shout—I love you! Be my forever person!—and instead, choke it back until they scream it first.

And I'm sorry if that sounds patronizing and condescending. But I mean it. It really sounds awful.

I am very very disturbed, angry, and prepared to rant about the act of proposing. No, not the act. For what are we—as Nietzsche said man is "the animal who makes promises"—if not promisers. It is in our nature to pledge and vow, offer oaths and commitments. We promise ourselves, God, our friends, lovers, partners, parents, strangers, co-workers, and enemies alike. We wile away the days promising to do one thing or another. And how strange these promises are. They are, after all, not actually binding—marriage is one exceptional vow that comes with an actual contract—and yet to "make a promise" is to conjure something sacred, to cast a spell. To break a promise is to call into question your very integrity.

What I'm here to say is that I honestly feel like the onus on men proposing—and the utter revulsion at any options otherwise—is one of the most glaring and ubiquitous sexist traditions in America. (I am of course solely discussing a heteronormative situation heretofore.)

We're actively bucking every damn one of these things; Misogyny! we scream. Sexist bullshit! we bellow. We protest and and rally and write and sing and study and sling mud around. Equality is four-syllables forever tripping off our tongue and yet when it comes to marriage proposals we're all clamoring for the knee-drop.

And before you say, ohhhh no no no, I don't feel that way, think about your friends. And then your friends of friends. Has any woman proposed to her boyfriend? Sure they might be doing the whole, "We've decided together to get married and even picked out the rings side by side," but I bet you he was still the one who uttered the four-word life-drop. She still waited to hear the words. His incantation. His promise.

What the hell is that all about?!

The arguments I've heard and read about are often framed as, well, it's tradition. Shrug. Or, "It's just a ritual, a symbol! Like the 'virginal' white dress and the father 'giving you away!'" Shrug.

Symbols are not benign and neither are rituals. It's all well and good to relegate it to a fuzzy-edged vignette of romance, of being swept off your feet . . . but know that it's also a performance and a participation. I realize that most modern-day couples aren't interested in participating in antiquated paradigms of women-as-purchasable-chattel and yet, they kind of are.

And this is to say nothing of what it's doing to the men-folk; which is probably filling their guts with churning dread and anxiety. Talk about pressure. I think we've all learned that anything cooked at a temperature this high is likely to at least burn your mouth and maybe even explode.

Let me tell you a quick story: One of my best friends from college had been in a lovingly tumultuous, on-again off-again romance with her now husband. They were in their most recent "on" phase about two years ago and I knew they were going to get engaged; they had talked about it. I'm away one weekend minding my own business in a cabin outside of Pescadero when her boyfriend, *John, gives me a call, asking about his proposal idea.

"I want to do the choreography from 'Single Ladies' with a few friends. Do you think she'll like that?!" I beamed and cheered and sent him forth with my full blessing. My pal is, after all, not a terribly sentimental creature; she isn't all that interested in a sweeping display of public adoration. I thought a cheeky, cross-dressing number was perfect.

Cut to the big proposal? She had NEVER seen the video. She had no idea what she was even looking at. She said yes and then cried a bit that night. "That's my engagement story," she sighed. "I mean, how do I even explain that to my grandmother?"

I realize that part of my desire to propose is the sheer fact that I am totally into how grotesque and off the visual seems. I want the subversion. I want to make people feel uncomfortable. I want to induce an incredulous pointing and snickering. "Look at the funny lumpy feminist kneeling before her man!" I get that in some very reductionist way a man kneeling before me like he's my servant, knight, protector, or slave is a fleeting inversion of the power dynamics (which I am not even into anyway) but in reality it's just weird inverted sexism.

Stephanie Coontz, author of Marriage, a History: How Love Conquered Marriage, tells Tracy Clark-Flory of Salon that despite fundamental shifts in societal attitudes and even legislation surrounding the meaning and definition of marriage, tradition tends to trump all. “It’s the symbolic areas that seem to be the most resistant to change."

Meghan DeMaria of The Week echoes much of my incredulity as well—how can we truthfully strive for an egalitarian relationship when it's prefaced on something so archaic and one-sided:

"The engagement ring is a sort of 21st-century dowry in the Western world, too. The traditional two-month salary rule not only signals a man's interest in spending a life with his partner, it inadvertently sets the relationship up for a lifetime of inequality. It's vestigial sexism at which no one seems to blink.

If anything, women are more to blame for the sexism of the male proposal. Instagram and Facebook posts of sparkly rings—complete with the obligatory 'oohs' and 'aahs'—perpetuate the idea that women's affections can be purchased."

. . . or maybe I'm just overthinking it all. Maybe the majority of women who identify as feminists and want an "old-fashioned" proposal have thought this all through and consciously chose to participate. Not under duress. Not under some societal deluge of pressure. They gave the tradition the side-eye and then said, this is what I want. And choice—to define not only what it means to be a woman or a wife but to pick and choose the parts of culture that resonate with you—is at the crux of feminism.

Fine. I acquiesce a bit. But before I go I wanted to leave you with some stats and a promise.

First, the numbers that help support my observed societal aversion:

— Two-thirds of the students, both male and female, said they'd "definitely" want the man to propose marriage in their relationship.

Men's Health partnered with The Knot.com and asked 1,500 engaged or married men and women about proposals and:

— More than 80% of guys thought they should ask permission from his partner's parents.

— 76% of men believe they should go down to one knee to propose.

ChiliSauce, a London-based event planning business, surveyed 7,000 Brits across the U.K. and:

— 65% of men quizzed would say ‘no’ if a girlfriend proposed.

— 79% women declared they would not be willing to do it.

. . . and perhaps most terrifying of all but I'm not even getting into it?!

— 17% of women in England said they would prefer a tech proposal. Like on social media.

Interestingly enough in talking to my current boyfriend (and by talking I mean gesturing wildly and raising my voice at an uncomfortable pitch in a total diatribe in a high-end pizza joint) he mused that in these days of celebrated progression—with everyone trying their damnedest to upend the status quo and well they should—this tradition is a relatively benign one, a reliable sturdy raft in a sea of uncertainty, chaos, and miscontent.

Because here's a promise. If I ever want to get married I'll do the asking myself. But I will drag him, or anybody else I want to marry onto the raft and out of the frigid churning water. And we can weather the storm together.

If you like this article, please share it! Your clicks keep us alive!
Tags
marriage
proposal
weddings
women proposing to men
sexiam
gender relations
men should propose
feminism