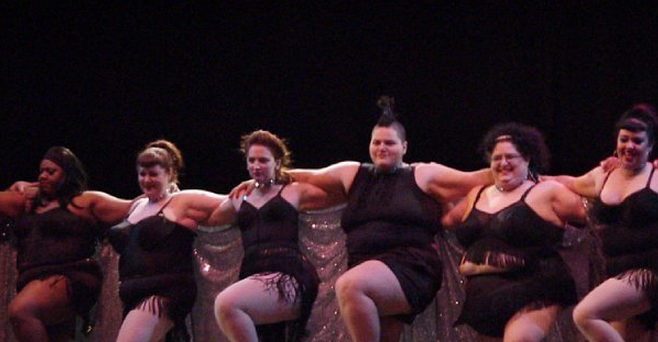 Here is a chilling question for  you: What is the worst thing you’ve ever seen on Facebook? Is it an image comparing anti-racist activists to a pack of monkeys? Is it upskirt photos of women taken and shared against their will? Is it a video of a kitten being burned to death?

Okay sure that all sounds pretty bad, but how about some photos of happy naked fat women, taken by a recently deceased beloved celebrity?

According the Facebook Community Standards, only that last example is actually problematic. (And yes, everything I mentioned is real and searchable on Facebook.)

When I found out that Leonard Nimoy died last weekend, my first thought was of his “Full Body Project,” a series of photographs he’d done in 2007 of San Francisco burlesque troupe the Fat-Bottom Revue.

The images are lovely. One is based on a famous work by photographer Herb Ritts (above). Another invokes Marcel Duchamp's Nude Descending a Staircase. In these photos, the women laugh, dance, and embrace. But it's all too much for Facebook—because they are nude.

So this morning, a few days after sharing the images, my account was flagged as "abusive," and I was unable to login until I clicked through a series of notifications about my post being removed—reminding me of those Community Standards—and a requirement to reassure Facebook that none of my other recent posts contained any nudity.

I wasn’t the only person this happened to. Yuli and Ama (the women behind Fat Girl Food Squad) also got sent to Facebook jail. A quick Twitter search reveals lots of similar stories of folks who wanted to celebrate Nimoy’s work as a fat-acceptance ally and instead . . . found themselves locked out of Facebook.

I don’t know if one of my friends flagged it. I'd like to think probably not, but I fully cop to often being disappointed by people who have wandered into my network. Strangely, some people who shared the link from my posting still have the content on their timelines, but with their friends commenting that they are unable to click “share” from the post.

I am just so exhausted by this. How effective can “community standards” be when a post that implies an Asian baby is going to eat her puppy is determined to be fine, but a Halifax artist offering free nipple tattoos (post-mastectomy or for trans folks) is banned? How did we end up here?

If you ask me, these Community Standards are created by a perfect storm of anti-sex attitudes and capitalism. We still live in a culture where the same people who let their kids watch CSI are also getting up in arms if sex-ed curriculum is overhauled to include information about consent. Pair that with the aging Facebook audience, and Facebook’s desire to not lose said audience (Baby Boomers tend to have more money than the Gen Xers and Millennials who are using the site less and less), and it all starts to make a depressing amount of sense. For whatever reason, this audience is way more upset by boobs than they are about violence or racism.

I don’t know what can be done exactly. All I can suggest is to continue to flag things that are truly toxic to our culture, and try to have frank conversations with people in your lives about why consensual nudity is hardly the worst thing that someone can stumbleupon online.

[Footnote: A recent article in Wired talks about Facebook’s content moderation program. I had previously assumed it was likely some sort of nipple-targeting-algorithm, but it’s actually a contract handled by a company in the Philippines that employs over 100,000 people who review every single piece of flagged content. I’m not in any way being critical of these workers, but they live and serve as the unfortunate peons of technocrats. These "reviewers" are just hired guns who implement lousy policies in the fastest and cheapest way companies like Facebook have managed to finagle.]