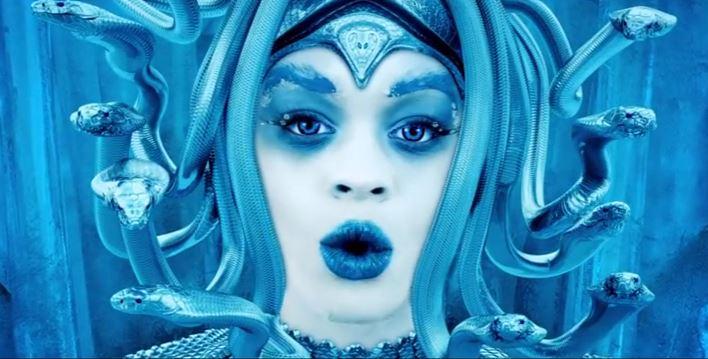 In her "Ice Princess" music video, Azealia Banks is not so much appropriating whiteness as she is thinking about what appropriation means to whiteness.

Usually, white people are the appropriators, and everyone else is the appropriated. Whether it's Iggy Azalea pretending to have a black Southern accent, Miley Cyrus surrounding herself with twerking black women, or Katy Perry wearing various other cultures as accessories, appropriation fits neatly into the uncomfortable American tradition of blackface, with white people dressing up as non-white people in order to appear funny, cool, sexual, and—in the most bitter irony—free.

Azealia Banks' latest video, though, shows that it's not only white people who can pick up someone else's culture. The song in question is called "Ice Princess," and in the video, Banks (who is black) appears in stark whiteface, riding atop a blue white snake, shooting ice rays from her eyes. "I make my own money/You broke honey? And they call me BANKS cause I can loan money," she mouths eerily out of the white make-up. "Colder than December/diamonds on Anna Wintour." Whiteness is money, institutional clout, and Anna Wintour's brittle glamor. White people dress up as black people to show they are down and funky and not hemmed in by respectability. Banks is more clear-eyed and more straightforward. She dresses up as white to show that she is powerful.

Nikki Minaj did something similar in her video for "Only," in which she (or the video's creator) used Nazi imagery. Rap has long indulged in fantasies of violence and power, and Minaj took a perhaps natural step in presenting herself as Hitler, the ultimate gangsta—no one outdoes the Reich in terms of corrupt evil thuggishness. In a world organized around white supremacy, the power of whiteness is the ultimate power—such that even a black performer like Minaj ends up associating (appealingly evil) strength with whiteness.

Azealia Banks is keying into some of the same impulses and imagery. Like Minaj, her video includes ranks of massed identical followers in scenes out of Triumph of the Will. When Banks declares, "All hail the Supreme Ice Princess," the robotic dancers' arms all rise as one in the Nazi salute.

But while Banks and Minaj both flirt (and more than flirt) with Nazi imagery, Banks' appropriation of whiteness is a lot more aware, and a lot more ambivalent. She clearly enjoys positioning herself as an evil ice overlord with armies and destructive power at her command; she enjoys whiteness as power and as super-villainy as much as Minaj does. Unlike Minaj, though, Banks, even for the length of a video, doesn't identify herself entirely with white super-villainy. Instead, the video suggests that white super-villainy is predicated, historically, on the destruction of people like Banks, whether they put on whiteface or not. The second part of "Ice Princess" shows CGI multi-colored blobs floating about the screen. The globs aren't menacing or attacking; they're just pretty and out of place in the cold white landscape. So, of course, as the avatar of white supremacy, Banks shoots them with her ice rays in an effort to freeze and kill them.

It doesn't work though; containing all that color in whiteness is harder than it looks. The end of the video shows a multi-colored explosion, with Banks' whiteface first screaming in agony, and then itself turning into a welter of digitized colors. Azealia Banks, the evil ice princess, is defeated—which means that Azealia Banks, the woman of color, can live. The chorus, "I'm feelin it, I'm feeling a change/I'm feeling it, in the air," through most of the video comes across as a declaration of transforming to whiteness; what Banks can feel is the power of being something she's not. But at the end, that seems to be inverted; the change is not to whiteness, but to freedom from whiteness and its power.

The Ice Princess is a fantasy, but it's a fantasy with fangs. Believe in it too much, Banks seems to say, and you too will be frozen.