What Drunk White People Get Away With, People Of Color Are Killed Over 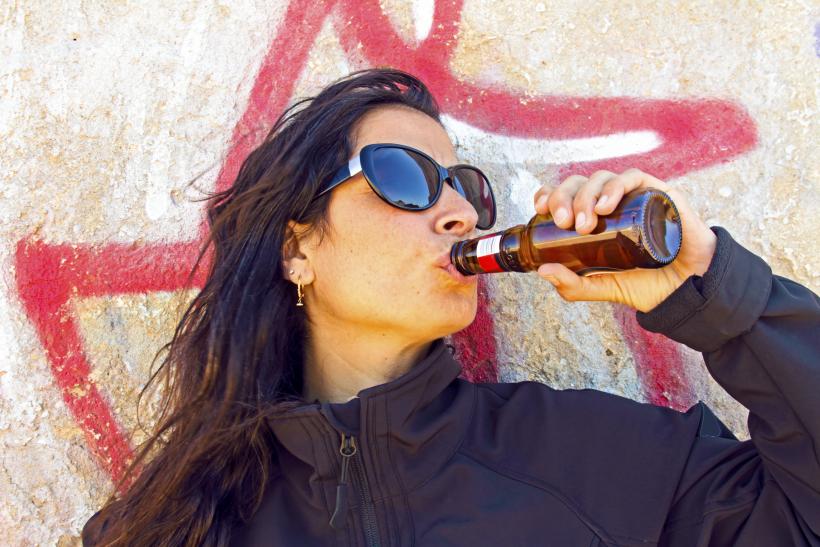 Led off to the back of a police car, I sobbed, the center of everyone’s attention.

So there’s a video circulating on the internet of drunk white people acting like assholes towards a police officer. The video takes place at a Fort Wayne restaurant, and begins as one woman calls another a bitch. When the cop says “You’re intoxicated” and “It’s time to go!” the woman gets in the cop’s face and says, “What are you going to do, arrest me?” She then calls the cop a choice word that rhymes with . . . well, no words rhyme with pussy, so there you have it.

After a good three minutes of being verbally abused, the woman finally gets arrested—as she deserved to be. Some (dumb) people see this video as another example of police misconduct and infringement on the civil rights of those involved. But she was breaking the law by creating a major disturbance in a public space. She refused to follow the officer’s totally reasonable instruction to leave. She and her friends were behaving aggressively towards the cop, with their bodies and their language. As he attempts to cuff her, she resists arrest. We can only imagine how the scene might’ve turned out if the woman hadn’t been white.

There’s a famous bit by David Chapelle where he describes just how differently white people act around the cops, and how they get away with it. Years later, it still rings as true. I’m talking about one video I came across in my Facebook feed, but I could just as easily be talking about this one. Or this one. Or this one. You get my point. White people acting foolishly as they get arrested is nothing new. What’s new is the political climate within which videos like this exist.

We’re talking about race, and white people’s entitlement. In the case of this particular video, we’re also talking about drunk people being drunk. Sure, #NotAllDrunkPeople, but it’s a fact that when people act this outrageously, they’re often intoxicated. Drunk people cause scenes. They use obscenities in threatening ways. They disregard other people’s boundaries. When shit goes bad, their drunken behavior escalates. They humiliate themselves.

I don't count myself out of this phenomenon. In fact, back when I drank, picking fights with strangers was one of my favorite ways to end a night. I’d find the biggest, most threatening dude in the place and get all up in his face. To really picture this, you have to know that I’m 5’3” and 120 pounds after a Chipotle burrito. In other words, I’m little. And I’m white. In spite, or perhaps because of these facts, I’m a belligerent drunk—it's the reason why, around eight years ago, I stopped drinking.

Looking as I do, I always anticipated getting away with it—and for the most part, I did. On the rare occasion that I got swung on—I can think of two instances, both of which involved me throwing the first punch—I was shocked.

Assuredly, I was drunk during these encounters. But to say that alcohol is the sole driver of this kind of entitled behavior—especially when it involves the police—oversimplifies the more complicated truth. Drunk or not, it’s a fact that white people are more prone to acting like assholes to authority figures—because we’re more likely to get away with it. White people are less likely to acknowledge our systemically biased system as we are prone to feeling entitled to the privileges it affords us. And when encounters with the police don't go our way, we’re more prone to feeling like victims—even when the negative consequences are our own goddamn fault.

And even though I no longer pick fights in bars with strangers, I can still sometimes be an asshole. I can sometimes pop shit and break minor laws with relative impunity. The hashtag, #CrimingWhileWhite lets me know I’m not unique in this regard.

As the most recent example, I was pulled over on my bicycle after I rode through a red light in plain view of a parked police car. They probably wouldn’t have stopped me at all if I hadn’t narrowly missed a woman pushing a baby carriage. I argued with the cops for awhile about my proximity to the woman—even as their faces pleaded with me to just shut up, say I’m sorry, and move along.

As I peddled away without so much as a ticket, I couldn’t help but reflect on my conduct. I had just behaved in a way that could have gotten a person of color killed. Not that anyone ought to be killed for running a red light or talking back to an authority, but why’d I have to be a dick? It was a moment of realization concerning the double standard for white people and people of color interacting with cops.

I was also struck by how difficult it was to admit, even to myself, that I had been in the wrong.

The one time I got arrested was back in high school. Week after week in a different tube top and the same skintight black pants, my girl Jenny and I would go dancing nearly every Friday night at a club called the Cosmopolitan—the Cos, we called it for short. In a strip mall sandwiched between a Dollar Tree and a Payless Shoe Store, on under 21 night at the Cos we felt so grown up. On this particular night someone said something about someone and so afterwards everyone was outside, circling to fight. At the center were our friends Danny and Andre and some other kids from another school. Just as shit was about to go off, the cops pulled in to break it up. Words were flying until the cops moved in to arrest.

It’s probably no coincidence they grabbed Andre, the one black kid in the group. I probably called the cops racist and pointed out what they’d done. And I was right! But I was also drunk. I remember even at the time, knowing I was behaving belligerently. I wasn’t making my point and I wonder today if I was really even trying to. A part of me found what was happening exciting—I was challenging a cop! That is, until the cop grabbed my arm to cuff me and I burst into tears. Led off to the back of a police car, I sobbed, the center of everyone’s attention.

We’re in a critical moment in our nation’s history. Technology has captured, in brutal images, the institutionalized racism of our criminal justice system and the police infringement on the civil liberties of people of color. It’s a time for action, and people of color are patiently explaining how to be allies. It's time to take our cues from them. It is not time for white people to make this about us. It is not a time for white people to behave criminally because we're drunk and feel like it. Civil disobedience is definitely a thing—but civil disobedience is nowhere to be found on this video.

I don’t think the drunk white people captured in this clip were actually concerned with making a political statement, but for those of us who are—for white people who truly want to involve themselves in political actions against racism—we need to listen. “White people and nonblack people of color have the luxury of treating [cases of police brutality] as injustices,” writes Rawiya Kamir in a conversation on race aptly called The Unbearable Whiteness of Protesting, “For [white people], it is moralistic. For [black people], it is about survival.” In other words, our whole way of thinking—even our way of thinking about oppression—comes from a place of privilege.

The way the white people in this video interacted with the police is embarrassing. So was the way I behaved nearly twenty years ago, when I was more interested in making a scene than helping my friend. Throughout and especially in the end of the video, the white people involved act like they’re the victims, just like I did when I got nabbed.

“Black, white, it doesn’t matter—they’re coming to get you,” he solemnly concludes. “Black people have been oppressed for awhile. Now, they’re coming for us.”

If you like this article, please share it! Your clicks keep us alive!
Tags
Police
violence
Arrests
race
racism
police brutality
people of color
injustice