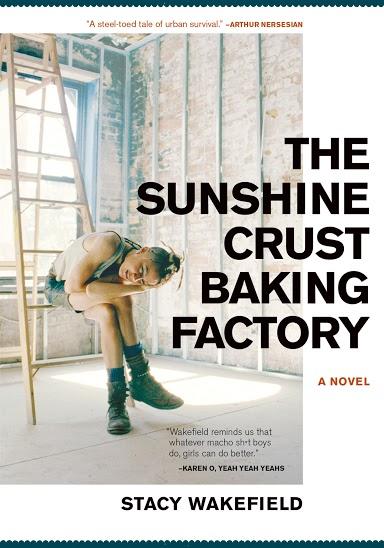 Enjoy this excerpt from Stacy Wakefield's debut novel The Sunshine Crust Baking Factory. Wakefield published her first nonfiction book about squatting, the underground classic Not for Rent, in 1994. Wakefield is cocreator of the photo/essay book Please Take Me Off the Guest List with Nick Zinner and Zachary Lipez. She grew up in the Pacific Northwest and lives in Brooklyn and the Catskills with her husband, musician Nick Forte.

When I showed up in New York with my dog-eared copy of Hopping Freight Trains and my new tattoo, I thought getting a room at a squat would be a cinch. These were my people, right?

My dad had been worried by the tattoo. He’d asked if it might make it harder for me to find a job. But that was the whole point. People spent all their time working stupid jobs so they could buy a bunch of crap they didn’t need. The whole routine was for suckers. I wouldn’t need money when I was a squatter, and to join the squatters, I had to mark myself as rejecting mainstream society and its ass-backward priorities. The tattoo was a better investment than college. I could have convinced him if his new wife hadn’t been looking over his shoulder making that face.

Anyway, it turned out getting into a squat was harder than joining a sorority: hopeless. I went to every show, every workday, every Food Not Bombs and Critical Mass, but the squats were all full. I’d had some vague idea about squatting my own building, but my older friend Donny, who was like my squatting mentor, said I’d never find an empty building on the Lower East Side now—I was ten years too late. He said to check out Brooklyn. But who wanted to go to Brooklyn? I didn’t come all the way to New York City to live out in the middle of nowhere.

Then I met Lorenzo.

He was sleeping on the roof of ABC No Rio like me and a bunch of other summer campers and transients. It was tent city up there. I’d seen him around and knew who he was. I had his band’s first seven-inch and I’d even interviewed the singer for the zine I did in high school. That was just a few months before they’d broken up after a fight so spectacular it resulted in a fire and ten arrests at a squat in Berlin on the last show of their tour. Everyone knew the story; they were notorious.

One night he was sitting near the edge of the roof drinking a forty and I went and said hi and we got to talking. It was too hot to sleep; the air was thick and oily. Lorenzo told me about the music scene in Mexico City where he grew up, about the squats his band played at in Europe, and how he’d come to New York to start a new band. He wanted to squat a building too, so I told him what Donny had said about Brooklyn, about all the empty buildings out there. I repeated what Donny had told me, that a new building had been squatted just this year in an area called Williamsburg. I liked sounding like I knew a thing or two about New York already. Lorenzo had this amused look, like life was a big messy show put on for his entertainment. The way he told stories about cops attacking a squat he was staying at in Bologna or getting strip-searched by border guards in Switzerland or hitchhiking through Spain—it seemed like he never took anything too seriously. He made me want to go on adventures with him. And okay, he was seriously good-looking. He had dark eyes and a sly smile and a Crass tattoo. I was flattered by how he took for granted that I knew the bands and cities he mentioned, talking low so all the people sleeping around us couldn’t hear.

Lorenzo was into it and suddenly being out in Brooklyn didn’t sound so bad. He said it’d be so much better to start a building ourselves and invite in who we wanted, instead of kissing ass at the established squats. He said a German dude had told him how to figure out if a building was abandoned: you hide a matchstick in the doorframe, and if it’s still there a week later you know no one is going in or out. He knew all kinds of tricks like that. I got my map out of my bag. Williamsburg was right over the river. It was the new frontier. We agreed to go explore after dark one night. I could hardly believe my luck. Lorenzo from Disguerro! He was so cool! We were going to be a team!

I didn’t see him the next day. When night fell, I went up and sat on the roof to wait for him. The later it got, the more I worried. Maybe I’d misunderstood. Maybe he meant another day. Then it was midnight and I started thinking I’d gotten carried away. Probably he was just talking. Why would a guy like Lorenzo move all the way out to Brooklyn? Maybe he’d gotten offered another place to live. Or even worse: maybe he could see I liked him even though I’d tried to be cool and it scared him off. That had happened before. Guys think I’m great because I’m not girly, we like the same bands and talk about records, and they really like me, but when it comes down to it, they can’t deal with the size of my ass. He’d probably hooked up with one of these skinny waitresses with a Betty Page haircut and tattoos. They were all over the neighborhood and they had apartments with air-conditioning. Lorenzo was probably somewhere like that right now, watching cable TV. He looked like a glue-sniffing badass from Mexico City, but he’d let some things slip last night—like how his sister did ballet . . . I stopped myself. He was gone one night and I was turning on him like a crazy person. Take a breath, Sid, I told myself. Go to bed.

The next day I distracted myself by drawing in my sketchbook. I only worked one day a week, running Donny’s record and zine table at hardcore matinees at ABC No Rio, so I didn’t have anything I had to do. I drew Mohawked punks getting chased by cops. Riot grrrls beating perverts with their little purses. Yuppies being devoured by their designer furniture. When I was immersed in a drawing I forgot about everything else—like the fact that summer was going to be over soon and if I didn’t find someplace to live I was going to have to take a bus back to New England and beg my old boss to give me my stupid job at the comic store back.

Then, on the third night, Lorenzo showed up after midnight. He whispered, “C’mon,” and I jumped out of my sleeping bag and laced up my boots . . .