I Don't Hate People...But I Hate My Psychiatrist 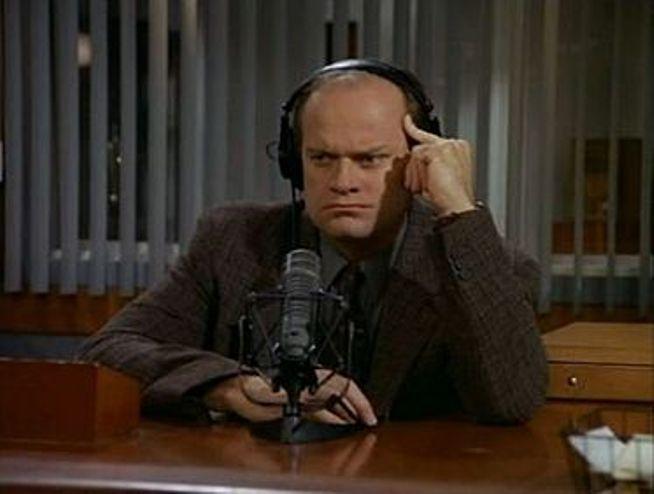 Unlike Dr. B, Dr. Frasier Crane is listening. Image: Wikipedia

Dr. B is an ass. He’s condescending. He leaves out files from other patients on his desk. One visit, I saw the file of a coworker — open to notes and history. From the very first visit, Dr. B has looked at his computer screen while asking me questions and listening.

If my grandfather and every photograph are to be believed, I cried for my entire first year of life. In Kindergarten, I told my mom I wanted to die. Not with any drama, just as a fact. I cried every single day of my life until I was 18 years old.

I did not know this was abnormal.

I tell you this to explain that I have always been depressed.

I was very lucky as a college freshman seeking a neurologist in a new town to treat my migraines. I found one. He was a delightful man; fatherly in a non-creepy way. During our first visit, he prescribed an antidepressant in addition to a battery of tests. He didn’t ask if I was depressed or thought of harming myself. He listened and intuited and probably saved my life.

So for the next fifteen years, I continued treatment for depression under the care of various neurologists. Varying medications at varying doses mostly worked to make me get through life without falling off the edge.

Then medical science discovered that Celexa, foundation of my existence, caused some heart problems. One awkward EKG later, my doc said I had to quit it. Instead of wisely switching to a new drug, I decided I was likely cured and didn’t need any help with my serotonin.

I was wrong. We’ll skip that six or eight months.

So finally I got a psychiatrist, at the point where I had taken antidepressants for fully half my life. I live in a small-ish town and have private insurance. Turns out, that means there is one psychiatrist I can see. Just one.

Dr. B is an ass. He’s condescending. He leaves out files from other patients on his desk. On one visit, I saw the file of a coworker — open to notes and history. From the very first visit, Dr. B has looked at his computer screen while asking me questions and listening. I get that he’s recording responses, but is it necessary to do it in the rudest way possible?

Dr. B is also sure I have sleep apnea. I can only assume that he thinks this because I am overweight. There’s no other indication in what I have told him that would point towards apnea. He’s certain I snore and just don’t know it. Don’t I wake up gasping for air? No. He seems so disappointed. Every visit, every three months for two years, he asks me probing sleep disturbance questions.

I once had a spell of manic productivity. It was pretty great, until I realized it wasn’t normal. When I brought it up — as a worry, given that I have bipolar siblings — Dr. B acted like I’d asked for a never-ending prescription for heroin.

At my last visit, one I’d cancelled and postponed as long as possible, I had a bit of a headache. Kids had been sick, lots of rain and clouds instead of my usual sunny Arizona skies. Not a big deal.

“I have a headache.”

“I can tell you don’t feel well.” Instead of sounding sympathetic, Dr. B is snooty, like he’s the genius who sussed out my issue.

“Why do you think you get headaches?” he asked.

“I’ve had migraines since I was 13,” I explain. “After 35, they seem to have gotten better, so I’m guessing hormones are related.”

I. Don’t. Know. How many ways are there to say this? Isn’t he the medical professional?

This goes on a while longer, like I’m hiding a secret and don’t want to tell him. If I knew what caused headaches, wouldn’t I be super-rich?

Dr. B knows I’ve got no choice in who to see. Free-market economic mumbo jumbo is happening here — something about supply and demand. There’s no reason for him to act like a human. Acting like a human won’t make any more money. It won’t get him more clients. He can rush me in and out with minimal discussion, never looking at me longer than two consecutive seconds, and he'll get paid just the same.

It isn’t easy to bring up mental health professionals in casual conversation — everyone has their own baggage and assumptions that they bring to the table. The few people I have mentioned Dr. B to have been thrilled to hear they aren’t alone.

A great psychiatrist can change your life. So can a bad one.

If you like this article, please share it! Your clicks keep us alive!
Tags
psychiatry
bad doctors
bad psychiatrist
Depression