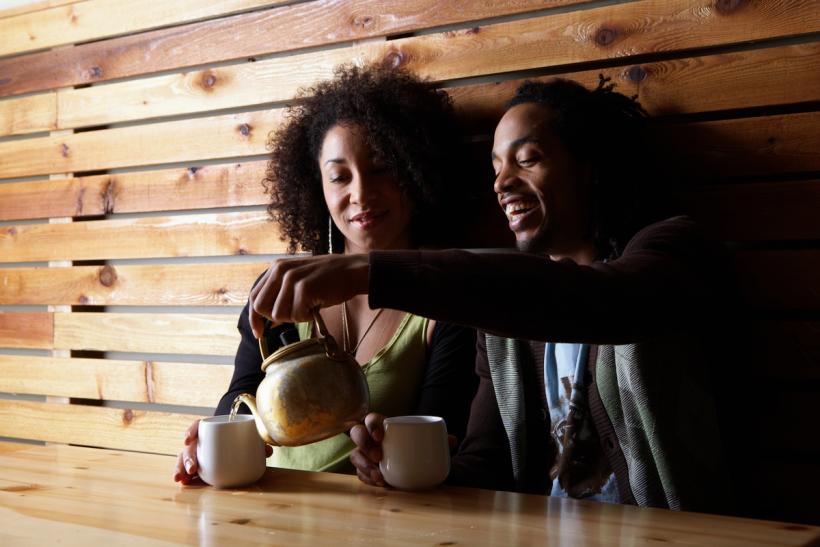 I realized that part of the reason I was constantly partnering with “broken” people was because that's how I viewed myself. Image: Thinkstock.

We have a term in recovery that refers to the habit of continuously picking incompatible romantic partners. The person who does this, we say, has a “broken picker.”

Prior to recovery, I had a broken picker myself.

It’s like I was physically attracted to red flags.

I will not attempt to recreate the magic of an essay I wrote years ago capturing the exact moment when I woke up. When I say, “Congratulate me on my engagement, because I earned it,” I mean it.

It took a lot of soul-searching to fix my broken picker and finally find a great guy.

I met my fiancé on OKCupid around two years ago. That means I’m old enough to remember when online dating was embarrassing, but also young enough to not feel embarrassed by how Arran and I met.

It also puts me squarely in the OKCupid demographic. I’m not sure how it is these days, but when I was still “on the market,” Tinder was more a hook-up site than a place where you’d meet people you’d actually want to date.

People’s attitudes towards online dating are changing. Still, I have a lot of friends who are, like, Oh hell no.

To these people, I love to offer my success story.

Here are 4 ways I made online dating work for me:

I went online for the first time in 2012. Fresh out of a six-year relationship, I probably shouldn’t have been dating at all. But after I slept with a coworker after the Christmas party — I know! Cliché! — I figured that, at the very least, I needed to widen the dating pool.

So, online dating it was.

I do have one advantage when it comes to meeting people online: I really like dating.

I like getting dressed up and going out. I even kind of dig meeting someone new. I know these are aspects of dating other people dread, but I’ve always enjoyed these things.

Perhaps this is one explanation for (or else a result of) my sex work past, I dunno. I know that, in the beginning, I thought of dating as an adventure. I didn’t take it too seriously.

I have friends who document their every dating disaster. This is not the way to go. Instead, I tried to focus on whatever I liked about whomever I was with. And if I didn’t like them enough, I didn’t see them again. Sure, I had terrible dates. But guys like this didn’t discourage me. I was determined to have fun.

2. I had a clear sense of what I was looking for.

I had fun — probably too much fun. Going out every night, seeing multiple guys at once, having sex galore.

Not that there’s anything wrong with that, but for me, it was exhausting. When, for shits and giggles, I found myself considering a date with someone with whom I scored a 99 percent enemy rating, I hit pause.

I realized I had to stop treating my life like a science project and consider what I really wanted.

After 30 dates — that is literally the number, I counted — I found myself in a committed, monogamous relationship with a great guy. Eight months later, that ended.

I went through the very first heartbreak, which was very painful at the time, but is adorable when I think of it now.

Hello, daddy issues I never dealt with! How’s it going, fear of rejection and abandonment? I see you!

It was after that breakup I got clear.

I took take time off from dating, for real this time. While I was single, I examined all my past relationships and admitted my part in what went went wrong. I made a list of the qualities I wanted in a partner, as well as a list of qualities that were deal-breakers.

When I went back to dating, I didn’t date men who didn’t qualify — no exceptions!

Even as I write this, a part of me protests: You can’t reject a person for those reasons! No one’s perfect! Everyone deserves love!

That's all true. Everyone deserves love, and I love lots of people that fall into those categories. But I don't rely on these people for the things I expect from a romantic partner.

In the end, I learned that you can hope for miracles, or you can change what you're hoping for.

I got very clear about what I was looking for. I also got clear about who I was and what I had to offer. I also made sure I “qualified” just as much as the guys I dated.

3. I stopped thinking of myself as a dented can.

I realized that part of the reason I was constantly partnering with “broken” people was because that's how I viewed myself.

I didn’t want to reject someone because I didn’t want to be rejected. I wanted to believe that people were teachable, and so I employed myself, constantly, as the teacher. The harder a person was to love, the more I considered it my job.

I thought of myself as hard to love. This is something I still sometimes struggle with.

But thanks to online dating, I stopped thinking of the things that have happened in my past as marks against me.

I’ve lived a complicated life: So what? So have a lot of interesting people.

I learned that it’s not really about what’s happened in your past, it’s what you’ve done with your experiences that matter. And if you’re still going through it, no points against you as a person — but you may need to concentrate on that before meeting someone new.

The second time around, I started aiming higher, and I stopped feeling so surprised when desirable men found me desirable also.

This is where my friends protest: “Of course guys found you desirable! You’re [list of positive qualities], whereas I’m [list of negative qualities].”

Perhaps the most important thing I learned from online dating is that we’ve all got our own list of reasons we think people will reject us.

And we’re both still learning. Neither of us are perfect.

4. I held space for the fact that change is often uncomfortable at first — but it's the only way to learn how to be in a healthy relationship.

I’ll never forget the feeling that came over me on our fourth or fifth date, when Arran came bounding up to my apartment with an armful of roses and a big grin. Even though things were going great — he was the very thing I wanted, and he apparently wanted me, too — in this moment I felt a sudden, desperate need to escape.

I didn’t run away. Instead, I stayed.

I learned to tolerate discomfort and “see what happens.”

Coming up next week on Becoming Bride: “The Honeymoon Is Over! (Or, I'm Fighting With My Fiance.)”

If you like this article, please share it! Your clicks keep us alive!
Tags
dating
online
marriage
relationship
OKCupid
unhealthy relationships
becoming bride