Why The Way We Portray Birth In Entertainment Matters 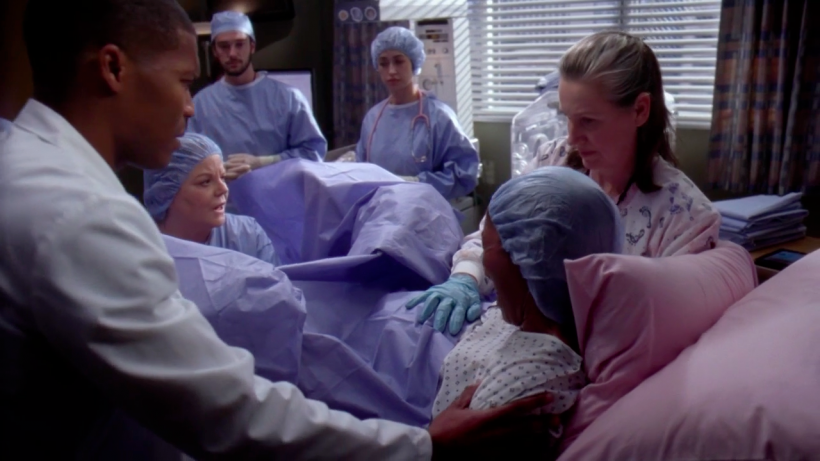 We have to believe that better birth is possible. Image: ABC.

Maybe it’s not birth itself that we should fear so unanimously. Instead, perhaps we should fear this radical, ingrained idea that birth is so habitually dangerous.

Last night, I was flipping through the channels and stumbled upon... OK, OK, I was watching Grey's Anatomy. (Yes, it’s still on TV and yes, sometimes, I still watch it when I’ve exhausted my Netflix options.)

One of the main characters on the show went in the labor, and I braced myself for what I knew was likely about be a horrific fright-fest, and also, probably a pretty big disservice to women, like most television births usually are.

The birth quickly turned terrifying. I won’t go into all the gory details, but think fast-moving labor turned home cesarean birth. I can't quite express how horrifying the scene was, but I can only say, I felt particularly glad I'd already had both of my babies at the time of my viewing it.

Even still, I went to bed, unable to shake the gory imagery from my mind and thinking about all the first-time pregnant people clinging to their bellies a little tighter because of that one graphic scene.

Grey's is known for its over-dramatic and unrealistic scenarios. It’s basically an evening-time soap opera. So of course, the way they might depict a birth shouldn't be much different — and indeed it wasn't. And this show, or any show or movie, for that matter, might not owe it to anyone to make birth look appealing, or even accurate — they're in it for the ratings. Plus, it makes for damn good entertainment.

Even though, being the birth aficionado that I am, I was yelling at the TV about all the things that were wrong or would never happen that way, I was still on the edge of my seat. “Please be OK, baby!” I whispered to myself, squeezing my glass of wine.

It is fully within a writer’s artistic rights to feature a scary birth scene for entertainment’s sake — I get that. But the problem is not with this particular show or any particular show for that matter.

The problem is that scary birth on TV and in the movies is not the exception — it’s the norm.

Television shows and movies have a way of almost always depicting birth as terrifying, agonizing, and inherently dangerous.

How many peaceful deliveries have we witnessed in film in recent years? Unless we’re talking about a YouTube search for gentle births, not that many. Typically, even in the best of circumstances, birth for entertainment’s sake looks like this: pure agony, screaming, screaming at one’s spouse, feet in the stirrups, crying, and begging for drugs to take the pain away. And more often than not, the birth becomes life-threatening.

A person who’s never given birth is left to decide for themselves whether these depictions are fictional or real. But there’s no doubt that absorbing this steady flow of identical information that sends the same message over and over again is troubling to a person who may one day find themselves pregnant, their mind swirling with every birth scene they’ve ever had the misfortune of taking in. It is especially troubling for Americans, most of whom have never seen a real live delivery before it’s their turn.

Generally speaking, we aren’t engaged in the birth community. We are rarely present for other people’s births; we seldom partake in births as active participants the way it’s done in many other countries do.

So the bigger problem with this lie — that birth is something to be feared, that it is inherently dangerous, that it almost never goes smoothly without medical intervention — is that we all collectively seem to believe it.

Surely, there is other information available, books and documentaries. There are communities of midwives (yes, in America!) who have a 1.7 percent cesarean rate and have never lost a mother or baby over thousands of births.

[F]earing birth doesn’t lend itself to better outcomes. In fact, the opposite is true.

It’s not as in your face as prime-time TV: You have to go looking for it. You have to dig if you want to learn about other varied experiences in giving birth. But our most-fixed mental images remain the scary ones — mothers- and parents-to-be screaming on their backs and fearing for their children’s lives. These are the images that most commonly sit at the forefront of our consciousness when we think about giving birth. These are the very thoughts that taunt our anxieties and become our lens through which we view the world of birthing.

We are taught to fear birth from early on in our lives, and the way it’s portrayed for entertainment’s sake plays a huge, disturbing role in that.

Yeah, it’s good prime-time TV. But it’s mostly not real, even though the steady stream of misinformation might lead us to believe that it is. Most of the time, if our bodies are left to their own devices, women go into labor on their own and give birth without complication. A low-risk mother, with no medical conditions, has about a 1 percent chance of a rare birth complication. But surely far more American women than 1 percent are having complicated births — this much is true. Our cesarean rate is about 33 percent, not 1 percent.

The problem with the lack of trust people develop about their own bodies, bodies that have the potential to give birth, is that it becomes more difficult to have a different kind of experience if we believe them to be so rare.

How can someone who’s grappling with a fear of childbirth stand up for themselves or avoid an onslaught of intervention they may not need?

If we’ve never seen peaceful, or gentle, or even uncomplicated birth, why should we believe our bodies are better or more-equipped than all the rest? Why shouldn’t we fear childbirth? The entertainment industry has told us that we should. Likely, so has our doctor and the routine hospital practices that are being done to our bodies without hesitation.

So, maybe it’s not birth itself that we should fear so unanimously. Instead, perhaps we should fear this radical, ingrained idea that birth is so habitually dangerous. Because it is this idea, rather than the evidence, that leads to our collective terror surrounding having babies.

And unfortunately, fearing birth doesn’t lend itself to better outcomes. In fact, the opposite is true.

In a study which examined women’s attitudes about birth, the results showed that the women who were classified as “fearful” had negative effects on women’s emotional health during pregnancy and increased the likelihood of a negative birth experience.

Our future mothers and parents need a new lens to look through, rather than the one we’ve been given. So we need to take it upon ourselves to explore the evidence and to find out what’s true, so that we can begin to set ourselves up for new experiences.

We have to believe that better birth is possible.

But television won’t do it for us, and neither will the movies.

If you like this article, please share it! Your clicks keep us alive!
Tags
birth
birth in the media
hospital
grey's anatomy
homebirth
c-section
fear
pregnancy
empowerment